Barrow in the 20th Century

Our thanks go to the Mike Morley and the "Millennium Group" for allowing the use of content from the "Barrow in the 20th Century Book".

Although not intended to provide a detailed history of Barrow in the 20th century we felt we should start with just a few interesting facts and figures. For more detailed accounts readers are referred to other sources such as Barrow-upon-Soar in Photographs (Kevon Thompson, 1978), Bygone Barrow-upon-Soar (Barry and John Wilford, 1981) and Holy Trinity Church, A Brief History and Guide (Lynne Brookes, 1999).
At the beginning of the century in 1900 the population of Barrow-upon-Soar was approximately 2000. By the end of the century the population had risen to nearly 6000. Although a threefold increase may not have been as much as one might have imagined, the increase in the population of the village is one of the greatest changes during the twentieth century. Obviously to provide places for all these people to live there has been a dramatic increase in the number of houses with consequent alterations to the road layout of the village (see maps on inside front and back covers). Interestingly the number of pubs over the same period of time has decreased from more than 12 down to 8! Most other village facilities have adapted to cope with the increased population. 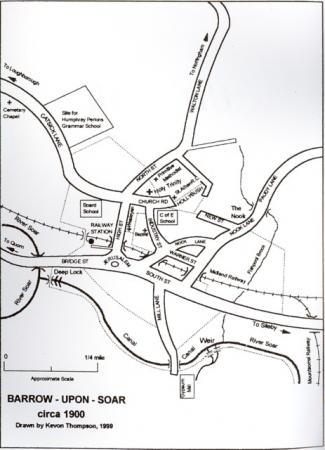 Because of space limitations we haven't been able to cover every aspect of village life. Notably we have not specifically covered local industry or the shops. The Parish Church held a Contact with Commerce weekend in 1998 which showed just how much local industry there is in Barrow. Over the century Barrow has always been a thriving industrial village and justice cannot be done to this in a few lines. However, no book would be complete without a mention of Driver's Factory on Sileby Road, Ellis's (now Redland Lafrage) and British Gypsum – some of the bigger employers in Barrow. The latter part of the century saw the development of the industrial estates on Sileby Road with numerous small businesses setting up. Perhaps a special mention here for Kinches buses, who in the 1990s are a major provider of local bus services. Older firms, who once provided bus services in the village, include Howletts and Squires.
On the matter of shops in the village the following – Webster and Barnes (newsagents), Marcer's (bakery shop), Fishy Clark (fishmonger), Middleton's (pharmacy), Hubbard's (butcher), Lockwood's (butcher), Jane Gilkes (ladies hairdressers), Graham's (electrical) and Grants (newsagents) – would spring to most villagers ` minds (at least from the second half of the century). Also, because of the major impact it must have had on the shopping habits of Barrovians, a mention of Somerfields (previously Fine Fare, then Gateway) the supermarket in the village.
Just a brief mention here of a few notable events that have had major impact on the village and for brevity we simply list them:¬
The two World Wars
– memorials in the Parish Church and in Industry Square
The schools
– closing of Cotes Road, opening of new primary school building
– Humphrey Perkins change from Grammar to High School
– increase in numbers, Hall Orchard to 2400, Humphrey Perkins to 2900 by 1999
Churches
– closure of the Wesleyan Chapel and of the Roman Catholic Church
Railway
– closure of the original station in 1963;
– the opening of the new station in 1993 in Grove Lane
Roads
– increase in residential roads with several estates;
– one way system;
– pedestrian crossings and traffic calming in High Street
Others
– closure and demolition of the Old Mill
– numerous floods including 1971 when the weir washed away
– new Medical Centre
– twinning with Marans
– opening of the Roundhouse
– the Fossil Trail
There are doubtless many other events and happenings; everyone will have their own memories. The contributions from individuals and organisations in which the events, happenings and memories of the 20th century in Barrow are recorded.

Previous menu page: Barrow upon Soar 1846
Next page: Living in Barrow in the 20th Century