The Company was formed in December 1922 by Miss Patricia Stone, the daughter of Rev. T Stone, and registered at Headquarters in May 1923. Miss. Rachel Stone then took over as Captain until she resigned in 1953. Her place was taken by Mrs Edna Porter who was Captain for five years. In 1958 Mrs Rose Godwin took over as Captain, a post she held until 1966. Mrs Rosemary Allen followed and in 1972 Mrs Marion Godwin became Captain with Mrs Carole Wheatley as Lieutenant. By this time there was a long waiting list of girls wanting to become Guides and in 1977 the 2nd Barrow-upon-Soar Company was formed with Carole Wheatley as Captain. 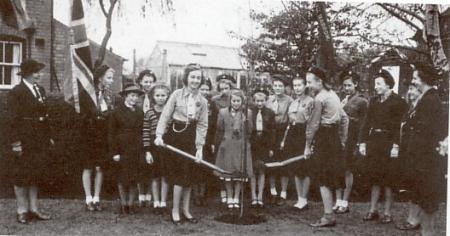 Planting a Tree at the War Memorial.

The Guides met each week in the Church Rooms until the new Scout Headquarters was built and they were invited to use the new building. Companies became ‘Units’ and Captains became ‘Guiders’.

Both Units flourished in the 1980’s and early 1990’s but as the numbers decreased Marion and Carole ‘retired’ and the Units amalgamated once again. At the present time the Guides continue to progress under the leadership of Patricia Sholl.

Over the years Barrow Guides have participated in many activities and events in the village and further afield. They have enjoyed attending camps from Unit to international level. A number of girls have gained their Queens Guide Award.

The aims of Guiding have remained the same throughout the years, but the programme, activities and uniform have been continually updated to cater for girls in each generation.