“ It does not seem possible that it is 50 years since we started the Brownies in Barrow. We had a Guide Company which we joined the first night and it was lovely. Miss Stone and Miss Kershaw decided we should have Brownies and asked Miss Lucy Marlow and Miss Ivy Kettle to be in charge which we did. We had a 10/- (shillings) loan from the Guides and paid it back as soon as we could. We charged 1/2d a week to join.” 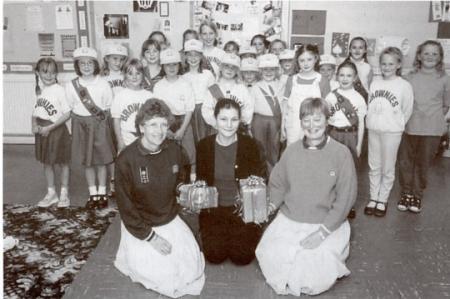 The Barrow Brownies in the 1990s

In September 1934 Mrs Lucy Marlow left and miss Ivy Kettle was Brown Owl with Miss Edna Kettle as Tawny Owl.
Ivy Kettle continued until 1955 when Mrs Betty Lovett became Brown Owl. In 1960 Miss Lucy Simpson took over the Pack for the next six years. Mrs Eileen Larkworthy was Brown Owl for two years before handing over to Mrs Tilly Yates in 1968. By 1976 the waiting list was over 100 so a second Pack was started by Mrs Vanessa Freer and both Packs are still flourishing.
Val Gillings is the present Brown Owl of the 2nd Barrow Brownies and Yvonne Green is the Brown Owl of the 1st Barrow Brownies. In 1994 a Rainbow unit for girls from 5 to 7 years was set up under the leadership of Mrs L Webb.