In 1938, William Chiltern in his Eighth Centenary of Holy Trinity Church, Barrow-upon-Soar, wrote
The modernisation of the church, begun in the sixties of last century, is now nearing completion. Holy Trinity, once referred to by a Bishop of Peterborough as "the little cathedral", is today a fine and imposing building which should ever be a source of pride and inspiration to the people of Barrow.
The people of Barrow were justly proud of the care they were giving to their medieval church. The "modernisation" had been extensive. The exterior walls had been faced with granite. The tower had been rebuilt despite collapse in 1868 and a new east window and reredos inserted in 1890. At the turn of the century, a vestry and organ chamber were built and a new organ installed. Following the First World War, new choir stalls, pulpit and war memorial had been carved by a local craftsman, John Hind and, eight years before Chiltern wrote his guide, electric lighting had been installed in the church.
The eighth centenary was celebrated with special services and a thank offering of 800 half-crowns. Rev J.D. Thomas, vicar from 1924 - 1941, wrote
We have a wonderful heritage, and it is meet and right that we should give thanks to Almighty God for the magnificent building committed to our trust, but even more for the countless numbers who have worshipped in this place and received an inspiration and uplift on the journey of life through such worship.
Between the wars, many churches had undergone restoration and were growing in confidence as the church began to modernise in other ways. The Book of Common Prayer was being revised, the thinking of the church was coming to terms with the upheaval of war and social change, new forms of church government were being established and the Church of England was seeking to find a place amongst other churches and a mission in the world.
But the modern age which dawned at the end of the second World War was very different from that envisaged and anticipated. Hiroshima and the holocaust, science and secularisation, population growth and political change challenged the church as never before. In Barrow, Canon Dew, a scientist by training, vicar from 1941 to 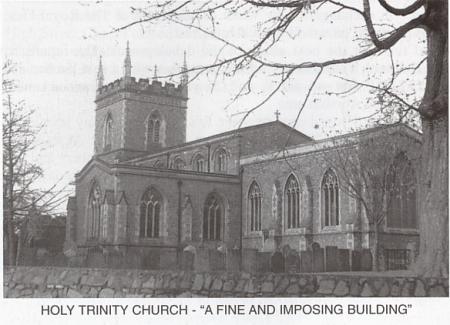 1964, was well equipped to lead his people into this new age and not afraid to ask the questions being raised by the permissive sixties.
Because it is now possible to annihilate half the human race, the leading nations consider they should have the means for doing so. Because it is possible to have every conceivable gadget in their houses, many people feel they must have the latest thing. Because it is now possible to have sexual intercourse without much risk of conceiving a child, many young people think they can therefore practise it without further ado. To deal with such situations we all need clearer thought and a strong sense of purpose. These are the gifts of the Holy Spirit and we should pray steadily for a deeper working of that Spirit.
The post-war church saw considerable changes in its pattern of prayer and worship. New hymns and new translations of the bible were appearing and by the early sixties new forms of the Communion service were being introduced. At the beginning of the century 8.00 am Holy Communion, 11.00 am Morning Prayer and 6.30 pm Evening Prayer formed the pattern of Sunday worship in Barrow as in many village churches. Between the wars, these remained the principal services with communion being celebrated after Morning Prayer on the first and third Sundays. By the sixties a family service had been introduced and by the seventies,the Parish Communion was well established as the main morning service. Looking back over his ministry, Maurice Woodward, Vicar from 1964 to 1978, was "bold to mention" as a feature of special significance
The Parish Eucharist every Sunday as the spiritual hub of all Christians living endeavour. It is the Lord's own service for the Lord's people, on the Lord's day. 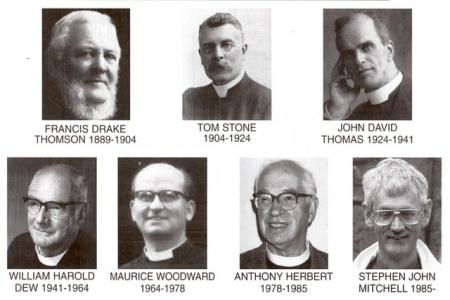 The Lord's people had always brought their talents to enhance their worship - serving, singing, arranging flowers and ringing the bells. To this service lay people began to participate in the leading of worship, reading, administering the sacrament and offering intercessions.
Processes to involve the laity and make the Church a more democratic organisation had begun at the end of the First World War led by the `Life and Liberty' movement. In 1920, Electoral Rolls were drawn up and Parochial Church Councils formed. With greater democracy came greater financial responsibility. Following the Second World War close attention was given to the financial condition of the church and the stipend of its clergy. This together with the rising cost of church government meant parishes having to contribute a Quota or Parish Share to the wider church as well maintaining the local church and its building. At the turn of the century, the main expenses in the parish accounts were salaries to the organist and verger. These were soon overtaken by the improvements fund for the new organ (£450) and vestry (£1400).
By 1938, the total expenses amounted £497.7s.11 d of which wages accounted for £115.1Os.Od and coke £33.Os.2d. The Quota amounted to £64.3s.Od and over £94 was given to charities. By the end of the 1960s, the Quota payment represented 23% of the parish expenses. In 1990, the situation had changed dramatically with the Parish Share accounting for 50% of the parish budget. It was costing a £100 a day to run the church. Stewardship and Fund Raising Programmes enabled the church to meet the demands laid upon it, the latest in 1999 raised the pledged giving to over £40,000 a year.
Giving financial help, has, from the beginning, been part of the church's responsibility. The Charity Boards on the North Wall of the Church testify to the generous patronage of individuals in founding a school and an almshouse in Barrow in the seventeenth century. While these became no longer its direct responsibility, 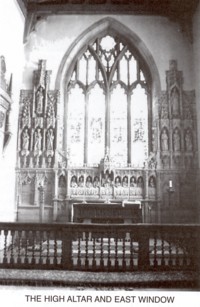 the church remained closely involved in their work and until the end of the Second World War, the `Bedesmen' from the almshouse took their place in the chancel stalls. In the 1970s extensive restoration and improvements were carried out on the almshouse to make seven comfortable flats.
Support and social recreation, education and charitable concerns were and are found in the organisations associated with the church. Some of these group have a long history, others have flourished to meet changing demands. The Mothers' Union founded a branch in the parish in 1908 which continues to flourish. Groups for men have also flourished. In 1905 a Men's Club was formed to "show that games can be played and enjoyed in an innocent way." Two years later a Men's Bible Class was begun. In the 1990s a new Men's Group was established.
As the population expanded in Barrow so the number of youngsters in the village grew. A group
children was formed in the 1960s and continues to flourish under the name Acorns. Sunday Schools, the Church Lad's Brigade and Girls Sewing Classes were a prominent feature of church and village life at the turn of the century with processions and outings and special services. Youngsters also contribute to the church's life through the Youth Club.
At the beginning of the twentieth century the church was in confident and buoyant mood. Working through the challenges of the century has brought a renewed sense of confidence and purpose as the church faces the dawn of the twenty-first century. The church continues to be well maintained. In the eighties, major repairs to the pinnacles, rewiring and redecoration were carried out at a cost of over £24,000. In the nineties, Martin Caroe, whose father and grandfather have been architects to the church throughout the century reported that the church was in excellent condition, beautifully and conscientiously maintained. 1 have rarely inspected a medieval building in such good order that still retained atmosphere in the interior.
The building continues to be adopted for new purposes. As pews were moved and a new vestry formed in the early 1960s to make more space, so now a re-ordering of the back of the church is planned. As the early twentieth century saw the church illuminated with electric light so, in time for the new Millennium, floodlighting has been installed.

The church continues to face up to the challenges to faith. In 1992 television cameras broadcast an Easter challenge: How were the discoveries of biblical scholarship to be communicated in a parish? As at the beginning of the century, new service revisions 77 are being introduced into the church. The world-wide expansion of the church now takes on a technological form and the church's website,The twenty-first century will no doubt prove THE CHURCH WEBSITE Challenging in unexpected ways. Perhaps much that has been familiar to worshippers in Barrow will pass away in order to meet these challenges. In 1908 after the installation of the new organ, Rev T Stone wrote "There is something pathetic in the passing away of what has been for generations past so familiar. But it must be so in this world of change, in which the old is ever giving place to the new."
The challenge for the church, however, described in its statement of intent, drawn up in 1998 after a Parish Appraisal, remains the same:
"To offer, through God's love, Christian traditions and resources, to enrich the lives of the people of Barrow and beyond".