No record can be found when Methodism began in Barrow, but we know that in the early 19th Century, a group of Methodists met at 10 Church Street.

The Wesleyan Chapel on High Street (now the Soar Valley Dental Practice), dates back to approximately 1822, but we can be more definite about the beginning of Primitive Methodism in the Village. The first Chapel was on the same site as our existing North Street Chapel (formerly Town Street). A barn, owned by Farmer Priestley was converted in 1820, into a Primitive Methodist Chapel. Hugh Bourne founded Primitive Methodism in 1810, so the “Barrow Prims” were quick off the mark - the movement grew rapidly in numbers and strength.

In 1910, it was decided to build a new Church and two sites were available; the top of Warner Street (which is now the Hosiery Factory) and the site of the old barn in North Street. By this time, a public house called The Royal Oak had been built together with a small cottage on the farmyard. The congregation was divided, the majority wanted to pull down the barn and they won. Plans were drawn up and the work began at a cost of £900. 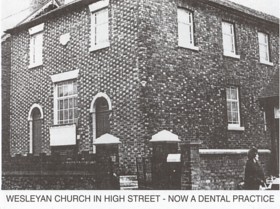 During building, services were held at Cotes Road Board School. The Minister at the time was Rev H Land and he also took on the role of “Building Inspector”.

1911 - the new Church was finished and opened with central heating and gas lamps – the “Prims” had gone posh, but it had to be paid for! A loan had been acquired from the Connexional Building Fund, which had to be repaid. The average working man at that time earned less than £1 per week, therefore money was scarce. As true Methodists they were not deterred and various fundraising schemes were launched. In the Schoolroom (now the “Quiet Room”) there is a panel of bricks with initials and names. The charge to those mentioned was 2/6 for initials and 5/- for a name. Mrs Martha Darby collected 1d a week from each Member.

Nearly every Saturday evening socials were held, but by the time the First World War broke out in 1914, the debt still wasn’t repaid. Many went into the Forces and efforts had to be suspended. It was 1922 before they resumed with an Easter Bazaar which, to the delight of everyone, raised £375. The Church had cleared the debt with money left to buy new hymnbooks and to clean the premises inside and out – 11 years after the Church had opened.

A Choir was formed and other weekly meetings took place. The highlight of the year was the “Sermons” (Sunday school Anniversary) and many of our current members still recall these events with great fondness.

Methodist Union took place in 1932, but the two chapels in Barrow continued to worship separately.

In the High Street Chapel in 1952, a Compton Pipe Organ was installed which was the envy of any Church of that size - the culmination of a lot of hard work in fund raising efforts.

In October 1968, the Chairman of the District and an architect visited both Churches and issued a report, which recommended that “the two societies should unite and all services be held at North Street”. The main reason was that the area of ground at the rear, and The Royal Oak would shortly be sold. This extra space would be invaluable for future development.

The High Street Chapel closed in April 1970, but in its day, the Wesleyan Church had made a large contribution to the life of Barrow.

The Church on North Street continued to thrive and the Trustees met for their Annual Meeting. An important step was taken by inviting members of High Street to join the board of Trustees making the amalgamation easier. 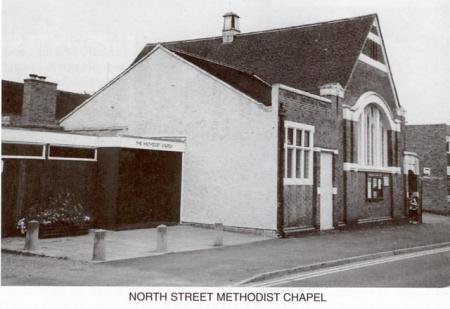 The Church was entering into a new era, so it was time to give the Church a “face-lift”. The choir stall was taken out, the organ sold and the communion area altered. Wood taken from one of the seats of the High Street Chapel was made into a cross that now adorns the front of the Church.

Negotiations took place between the owners of The Royal Oak and the Trustees for the purchase of the ground at the rear of the Church. Members of the Conservative Club were also interested – however the Methodists bought the site and the south-west corner was sold onto the Conservative Club.

Accommodation for the Sunday school and other activities were limited. A “post-war” bungalow was brought in and erected on the new ground. But, what about finance? We had acquired the new ground, reconstructed the inside of the Church, bought and furnished the Hall and were now setting our sights on a new kitchen and toilets. The Circuit Extension Fund made a loan and, because of the amalgamation, there was also the sale of the High Street property. Money-raising activities were a constant feature and so began the monthly Mini-mart, which still continues today.

The derelict Royal Oak was becoming dangerous but the estimate for demolition was £750. The Church could not afford it. Fishmonger, George Clarke came forward with an offer - in exchange for the width of one room of The Royal Oak, which bordered his property; he would demolish the rest.

1974 and time for the next phase of the development! The intention was to replace the Hall with a more sturdy building together with a new kitchen and toilets – the cost? £12,000! But we did it, and 25 years later we continue with major refurbishment to the worship area.

We have lost many loved ones over the last 100 years, many people who have worked tirelessly for the Church – but it’s not just a building. At it’s heart are the people and the fellowship we receive. We encourage our members and friends, to take every opportunity they can to come together to praise God – today and into the 21st Century, because now it’s our turn to build for the next generation of Methodists in Barrow Upon Soar.