Barrow upon Soar’s association with the game of Cricket began as early as the eighteenth century, with the sport becoming increasingly popular in the 1900’s. This review looks at Barrow’s cricketing heritage over the last 100 years, and reflects on both the teams and individuals who have made outstanding contributions to its success.

Several teams representing the Grammar & Adult Schools, Church and Barrow South End played friendly and league cricket, with the South End team being the senior club in the North Leicestershire Cricket League. In 1900 Barrow Adult School finished fifth but disbanded by the end of the decade.

The South End team played at Mill Lane with ‘The Bishop Blaise Inn’ as its headquarters until its closure in April 1952. Playing between the cow-pats and buttercups the conditions in the early part of the century were primitive, restricting batting techniques. 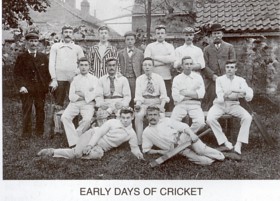 However, the teams were strong with many fine players including Jack and Tom Williamson, Charlie Black and William Lovett. Lovett became the first player to take ten wickets in an innings against Loughborough Park, and the ‘South Ender’s’ soon notched up an impressive record, becoming Champions of Division One and Two in 1906. By 1909, John Yates was a formidable player, with both awesome power batting and lively pace bowling, he was well supported by P Holt, W Perkins, A Harris, E Hardy and W Brooks. However, 1914 was the last year for the South End team, and from 1919, Barrow Town took the field.

From 1920 to 1925, the team won Division Two twice in four years. Key players of the era were K Marriott, W Harris, R Bennett and L Lewin in one of the Division 2 teams, which became champions in 1926. The reserves were champions in 1920 and 1922. However, a lean period followed with several players retiring or moving away, and this continued through the 1930’s, with the team only finishing once in the top six. The Club were indebted to George, Bill and Arthur Green who were instrumental in keeping any cricket alive. Arthur being the champion bowler whilst Bill took 76 wickets in 1932, at 2.3 per wicket. Ted Marlow, Herbert Foster, Harold Mitchell, W North were pivotal, with J Corby an excellent fielder.

After the war, cricket resumed on the King George V Playing Field. Although the games were enjoyable, playing conditions were poor and whilst keenness was abundant, the results were indifferent and victories sparse. Returning to Mill Lane, the 1951 Championship season was the turning point, and the team, captained by Geoff Cross, put out an outstanding bowling attack, with Bill Green taking 41 wickets at 3.78. It was the first silverware for 25 years! Reg Marlow and Kevin Newby became a formidable bowling force, and this partnership assured the Division 2 championship in 1954. The team, led by Rex Geary displayed both balance and style with Ron Williamson, Dennis Thurlby, Brian Metherall, Ken Lawrence and Geary at the fore.

The decade was completed with moving grounds in 1957 to the main Barrow-Quorn road with considerably improved playing conditions.

Replacing the fifty year old pavilion was completed during 1960 by raising funds through waste paper collection and a weekly tote. However, the sixties were ‘yo-yo’ years with promotion in 1963 followed by relegation in successive seasons. A period of consolidation followed, with some talented youngsters - Steve Pilgrim, David Sanders and Trevor Neal coming through. However, on October 26th 1968, disaster struck. Fire gutted the pavilion and all the club’s equipment and records were lost with only the bell and the roller remaining intact. The club’s primary objective was now to have its own new ground, and thankfully within 18 months, land was purchased off Nottingham Road. The task of turning the field into a cricket ground was completed by June 1970.

The decade brought club success with promotion to Division 1 and three Brian Clarke Cup wins, whilst the second XI won successive promotions from Division 6 to 4. The greatest accolade was in 1978, with a combination of exceptional gifted players under the captaincies of Roger Sibson, Roger Marlow and Tony Harris won the League Championship, the Clarke Cup and the Division 4 title. The decade ended with an all powerful playing squad that was to grace the next decade alongside a developing youth team.

The 1980’s brought the club a further Clarke victory and triple winning success in the Loughborough Charity Cup. The club was fortunate to have several high class all-rounders, with Roger’s, Sibson and Marlow, John Upton, Tom Hubbard, Brian Kimber, Tom Bates, Pete Lock and an opening batting pair of Paul Mitchell and Kevin Cooper. After 87 years, the Club joined the Senior League for one season before accepting an invitation from the Club Cricket League for 1984. Early success came with Championship wins of Division’s 2 and 4. Three batsmen, Paul Mitchell, David Smith and Colin Rue all enjoyed outstanding success, recording high aggregates and several centuries.

The nineties proved to be the best years of the century, both in terms of playing and ground improvements. Supported by generous sponsorship, improvements included a new pavilion, scorebox and practice nets. The playing side saw two Australians - Tony Balcombe and Ashley Robinson made telling contributions to the first XI, and throughout the 90’s, other notable players included Vince Clarke, Andy Haye, Vaughan Walsh and Felix Walker. A first win in the League Cup in 1995, was followed again the next year, and this combined with the Championships of both Division 1 and 4 formed the grand slam!

Integration into one County League in 1997 was the ultimate challenge for the club and it responded by grasping the first Premier championship of the Leicestershire Cricket League under Ian Williamson’s captaincy. Outstanding batting and all-round skills from Haye, Walker and Steve Atkinson, ably backed by the irresistible fast bowling of Walsh. The second team gained successive promotions and the Championship, with Ian Riley, Mark Bonner and Robert Kimber the stars of a talented eleven. Loughborough Charity Cup and Evening League Premiership wins also ensued.

The youth programme, so essential to the well-being of any Club, was resurrected and an essential partnership established with Hall Orchard Primary School. Support from David Dipple and Club managers saw several boys move through various age windows, with some playing in County youth teams and progressing up to senior status. The Club nurtured this encouraging aspect during 1998, and whilst there has been some reversal of the early decade, the future for the Club in the new millennium is set fair. It is hoped that the balance of youth and experienced players will continue with the traditions of an institution that has provided so much enjoyment, excitement, success and camaraderie over the past century.

NB. Any memorabilia, copies of old photographs and stories-articles from players, relatives and supporters, past and present would be most appreciated to the author at 15 Windermere Road, Barrow-upon-Soar and site administrators.