Football in Barrow-upon-Soar has it's origins in the late 19th century. The population of the village at that time would have numbered around 1.000, (compared with approx. 7.000 today). The team, known as the Barrow Rising Stars were based at The Railway Inn, ( now the Soar Bridge) and played their football near the Mill. Members of the Loughborough and District league, they were obviously formidable opposition as their record shows they were winners of Div. 1 in 1901/2 and 1902/3 and also Div 2 champions 1911/12. Cup success included the Bass Charity Cup, Rolleston Cup, and the County Cup. In one particular season four trophies came their way.

The early years of the century saw the birth of the Old Boys, (now Barrow Town). This team also played down 'Mill Lane', and comprised mainly of boys from the village grammar school, their record though, did not compare with the Stars.
Immediately prior to the First World War another Barrow team, the Trinity, were gaining prominence. Also members of the Loughborough and District league Div 1, they rivalled the Stars as top team from the village. Other members of the league at the time were, Quorn Havelock, Quorn Emanuel, and 4 teams from Sileby, ( Imps, Excelsior, Amateurs and Vics ). A referee's match fee in 1913 was 2/6d and football boots 6/- per pair (30p).
Trinity F.C. had an illustrious spell from 1918 onwards and during an 18 year period picked up a league championship, League Cup, and the Rolleston Cup. The Trinity's glories could not last and 1930 saw the emergence of 'The Gunners' and 'Barrow Athletic', the Old Boys reappearing in 1932. The Old Boys were members of the Leics. Mutual League and for a while were based at Cotes Rd. before moving to North St. and joining the Loughborough Alliance. 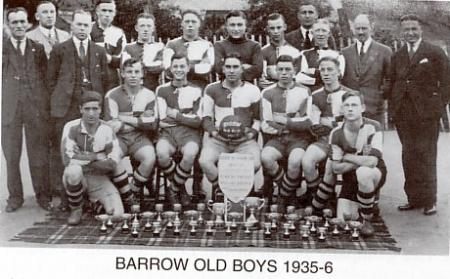 After the Second World War the Old Boys reformed in 1947 and following a public meeting at The Working Men's Club, entered the Leics Senior League with immediate impact as they reached the semi-final of the Senior Cup when they were beaten by Whitwick Colliery. The competition also included Leicester City Res.

In 1968/69 the Old Boys finished runners-up in Div 2 and promoted to the then Div 1. Managed by much respected local man Billy Williamson, they were also winners of the Loughborough Charity Cup and the Sileby Cup, (later re-named the Billy Williamson Trophy in his honour.) Soon after Barrow moved to their current headquarters at Riverside Park under the new title of Barrow Town. 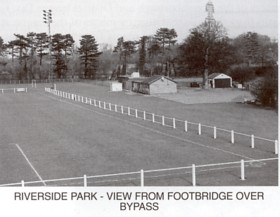 The success of 68/69 was emulated by the team of 92/93 managed by two more local favourites Arthur Chadburn and Colin Sykes. This team gained promotion to the Premier Div as champions.
The 94/95 season was a landmark in Barrow's history with a number of records broken. Highest ever placings for 1st and 2nd teams. Ian Hunters haul of 61 league and cup goals. 119 goals total with an 18 game unbeaten run-in to be pipped by one point for the Premier title. The team again consisted of the nucleus of the promotion side, again under the same successful management team.

In recent years the 'Club' has grown in stature and maintained their Premier league status. Twice winners of the Loughborough Charity Cup, Barrow defeated Coalville 3-1 in 96/97 and Ibstock 1-0 in 98/99, the competition's centenary year.

Riverside Park ground has undergone several major improvements in recent years, most notably the addition of a £40.000 floodlighting for both the main pitch and training area. The recent amalgamation of all junior, youth and senior teams makes Barrow Town one of the largest football organisations in the county that now caters for soccer from under eight to senior level.