Originally built as a squash court belonging to the Lodge Estate (owned by the Whetstone family) - later taken over by the Adult School.
On Friday July 18th 1952 a General Meeting was held in the Adult School when Representatives of all the Chief Organisations in the village were invited to attend. Captain C. Emerson Huston presided. On the agenda was to discuss the formation of a “Darby & Joan Club" in Barrow-upon-Soar. Between 40 - 50 people attended this meeting. A Mrs Darby of the W.V.S. also attended to explain how a club was formed and what it necessitated. Mrs Darby detailed the assistance that would be given by the W.V.S. if a club was formed and run by members of the W.V.S. It was unanimously agreed that the club should be formed. Mr Spence saying he thought the club should be run by the village not the W.V.S. The majority were in favour of Mr Spence’s suggestion. A General Committee was then formed from the various Village Organisations.
The Representatives then attended a meeting held at the Adult School on July 25th 1952.
At the meeting it was agreed that an Executive Committee be formed consisting of a Chairman, Hon. Secretary, Hon. Treasurer and eight other members.
The following were elected: - Chairman - Captain C. Emerson Huston (who was to remain Chairman until his death in 1960) Mrs Frances Davis was appointed Hon. Secretary and indeed she remained the Secretary for 25 years. Mr George Green was appointed Treasurer. The following eight members were elected as Committee Members:- Mesdames Bartlett, Gilbert, Townsend and Woodcock along with Messrs W. Ball, Pagett, Spence and F.Wilford.
The question of raising the necessary funds to start the club was discussed.
It was agreed to write to all the Village Organisations asking them for a donation. An Entertainment Committee was also elected to seek out ways and means of raising-money to keep the club going. The following were elected:- Mesdames Lockton, Porter, and
Sutton and Mr Spence.
Captain C Emerson Huston proposed and it was seconded by Mrs Woodcock that the club be called the “Bishop Beveridge Club" named after a man who was born in Barrow-upon-Soar in 1636 and became Bishop Beveridge at St.Asaph. North Wales. Mr H Haseldine offered the use of the Adult School room for club meetings at an inclusive charge of 7/6d. Membership for the time being was to be confined to men and women of 70 years of age and over. A charge of 3p per meeting was made.
Printed invitation cards were distributed by the W.I. notifying the Old People of the opening of “The Club” on Wednesday October 1st at 2.30 p.m. Mrs Gilbert was the leader. Although no special opening ceremony was held. Mr Murray Rumsey from Quorn was invited to attend. Board games and dominoes were played, Tea and Biscuits were served by Mrs Gilbert and helpers.
In 1962 the Trustees of the Adult School decided to dispose of the building and offered it to the “Bishop Beveridge Club” for £300 plus legal charges. The Committee agreed to purchase the building. The low figure being asked for the building was because it was hoped to be beneficial to the Barrow people. Alterations were necessary as no windows were in the building, only a skylight. An architect was engaged and a new kitchen, cloakroom, ante-rooms, doors, windows and exits were required. The bulk of the money to purchase the building coming from donations given by the various Village Organisations. Messrs Ironsides & Co Solicitors were approached and after various complications the conveyance was duly completed and signed in 1965.
However, money to pay for the alterations had to be found and so a building fund was started. Every household in the village was sent a letter appealing for financial help. A "Thermometer was put up outside the Adult School to show the progress of the fund. Fayres, Fetes, Coffee Mornings and Musical Evenings were just a few of the events organised to raise funds. The various Organisations in the village also arranged events and gave donations. Indeed before the Autumn Fair held October 23rd 1965 each Committee Member was issued with a “Trading Shilling”.
Messrs H Perkins carried out the alterations and improvements - the work started in 1964. Whilst the alterations were taking place the weekly meetings were held at the Baptist School Room. 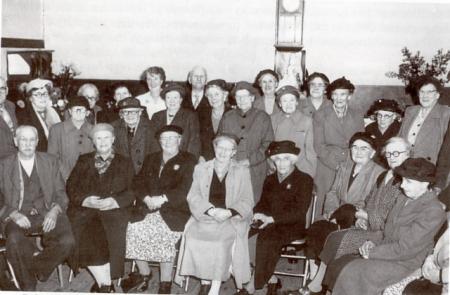 Trustees for the “Bishop Beveridge Club” were now a necessity and the following were appointed on July 9th 1963:- Mrs F. Davis, Mr B.C. Sharman, Mr F. Wilford and Mr T.A.S. Branston. Mrs Davis remaining a Trustee until her retirement in 1999.
The official opening of the Clubroom took place on Saturday, September 11th 1965 by Dr. G.H. Gibson (County Medical Officer of Health). After the re-opening of “The Club” it was then decided to hold afternoon meetings on Tuesdays as well as Wednesdays and also to reduce the age of membership to 60 years.
A number of different services have been provided at the club throughout the years, some no longer exist. The Chiropody service started in 1965 is now held at the Health Centre, the Welfare Food Service started in 1967 handing out Horlicks to the needy is no longer in existence, Handicraft sessions are no longer held, although if anyone is interested, this could re-start again. Holidays are no longer arranged. The Luncheon Club started in 1967 for people over 60 years who live by themselves. This service is still provided today and much enjoyed by the members. More volunteer cooks/helpers would be much appreciated. Coffee Mornings were started in 1967, also Whist Drives, both of which are still being well attended to this day. Film Shows, Bingo, Keep Fit, a Harvest Festival and Sale, Carol Service, Birthday Party and Outings were all started many many years ago and are still enjoyed by our members in 1999. During this time there has been a Visiting Service and Comforts Fund which provides kindness in times of illness and bereavement. All the above services have been run by volunteers throughout the years and that indeed remains today.
Further improvements and extensions to the buildings have taken place over the years, the most recent being the extensions and refurbishment to the kitchen in 1998.
“The Club” is a registered Charity, also it is non-political and non-denominational.
Barrow can be proud of the fact that the “Bishop Beveridge Club” is the only club in the Borough of Charnwood to own its own premises. This is due to the foresight of the original Officers and Committee, to whom we owe a debt of gratitude.
“The Club” has gone from strength to strength through the years, long may it continue.