The C.A. began as an act of faith by Norman Peck, the local Methodist minister. In early 1971 he took a conscious decision to do something to the benefit of each community where he worked; in Barrow to try to get all the voluntary groups to work together. He first spoke to the Council of Churches. They found that there were at least 31 different groups, all doing their own thing and often with very inadequate premises.
‘I felt quite strongly that, if they could all come together under one umbrella, the whole community could benefit’
The first simple suggestion was the Village Diary, housed in the Library.

In February 1971 it was resolved, at a meeting convened by the Parish Council chaired by H.O.Pell, that a council should be set up,
‘to co-ordinate and possibly extend, social, educational and recreational activities in the village.’
Miss Walker, Arthur Branston, Ken Pepper and John Thursby were on the first committee. Early on there was a close co-operation with Humphrey Perkins School and its Head, F.W.Morris. Facilities at the school were readily available for the community and fund raising was essential for a Community building at the school. Grants of £6,000 were given by the Parish Council and the Borough. It was the fund raising which led to the many events which became whole village celebrations.

Chief amongst these was the Donkey Derby. Stalls were set up, ice cream and teas were provided and a football tournament became part of the sunny, June afternoon’s carnival. Geoff King became chairman during this period. 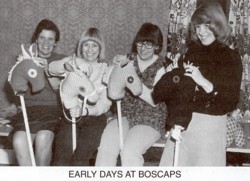 Well over 300 villagers turned out for a 38 competitor pancake race in Wycliffe Avenue. The village of Barrow in Suffolk had issued a challenge. Rosemary Pagett recorded the fasted time. Judith Rodgers sold hot soup, pancakes and drinks – she has been a guiding force in so many ventures over 25 years now!

Judith, Janet Thompson and Edith North met at the school gates one day(were they dreading the long summer holidays?). They were already involved in Playgroups and they now proposed s summer play scheme for local children. This became B.O.S.C.A.P.S. They took over the school for two weeks and provided woodwork, cooking, model making, macrame, dolls, sports, tuck shop and visits from the police, firemen and others as well as going out. All instruction and supervision was given on a voluntary basis! BOSCAPS is now organised by Laura Phillips, our dynamic and innovative Community Education Co-ordinator who also runs the Youth Club. This had been founded in 1983and organised by Joan Parkinson. They were once in the Guiness Book of Records when they played table football for 14 days. They are now producing their own Magazine, and the revitalised building is worth a visit.

The organisation and care of the swimming pool is also a task undertaken by the C.A. and many improvements have taken place making it possible for hundreds of children to learn to swim and for pleasurable use of the pool by local schools and the public.

When the Donkey Derby ended it was replaced by a Festival Day, during which the “Runs” put Barrow on the map in a big way. Marathon runner, Mike Morley was the main inspiration for eight years, followed for three years by Dave Rose and Roger Chappell; (Sarah Morley and John Rose became television stars for the series “Good Sport” made by the BBC). Many of the staff at Humphrey Perkins were roped in to help and in the early years, the dulcet tones of Norman Meeke (Deputy Warden for many years) were heard over throughout the village. In its eleven years the Festival raised over £40,000 for charity!

In September 1975 it was decided to have a local news letter three times a year. Liz Higginbotham was now the Warden and the first Editor was Adrian Speight. It is true to say that today this is a real success story, due largely to the inspired leadership of Francis Thompson and her dedicated team. It is delivered to every household in the village and is informing, entertaining and controversial. It should be said that the herculean task of producing the paper was but one of the many tasks undertaken by Eric, Ryan and Tom in Humphrey Perkins Resources Centre which is a lifeline to so many activities.

June 1988 saw the opening of the Fossil Trail. Appropriate for a village which has a famous plesiosaur on its sign, students at Loughborough College of Art have created a series of sculptures which are the framework for a walk around the conservation area of the village and the pleasant riverside. This was a real village project and shows that enthusiasm is as alive as it has ever been. The C.A. has supported many other ventures over the years and the Round House was given a Charnwood Design Award.

A recent success story has been the Panto Group. Many young people have become involved in this venture and have taken to the boards in a number of shows produced by the indefatigable Sue Rodgers. Tiny tots and teenagers and oldies have come together and worked to provide entertainment for the village.

The time and the space fail me to tell of:-
A “Who Cares” booklet; David Hill on the door; patient caretakers; Trevor Riddiough, the third Warden; Ginny Arrowsmith doing her one mile; a Jubilee Procession; Brian green and the cricket team in the Village Quiz; Dave, Claire and Jonathan lighting our way; David Rodgers measured tones and indefatigable help; Brian Henman’s unfailing support as our President; John Beaumont as Treasurer; Peter Yates, Maureen Green, Betty Turner, Carol Westbury all have been appreciated in their time and like many others still continue. They have run Discos, consumed barbecues in back gardens, blossomed in front garden competitions, lit up a Christmas Fair, served up tennis courts, orchestrated village variety concerts, distributed E.C. surplus food, helped to organise Evening Classes and answered any call from people in the village.

The work of the C.A. is not finished. With our new Warden, David Edwards, we look forward to co-operation in the work of Community Education, to extension of the facilities available (a floodlit all weather pitch?) in the new millennium.