The history of the Parish Council offers fascinating insights into the social and physical changes that have affected our village since the election of the first ten man Parish Council in 1894.

A Lighting Committee supervised the installation of thirty-eight copper gas lanterns, costing £80 to celebrate the marriage of King Edward VII in 1863. A Burial Board selected and managed the Cotes Road Cemetery site when the churchyard closed in 1893. On its formation, the Parish Council assumed responsibility for Lighting the Living and Burying the Dead, according to one Parish Clerk and set a Parish rate. 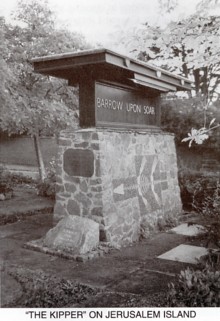 The War Memorial in Industry Square, provided by the public subscription, was dedicated in 1921; a fitting tribute to the Village's many war dead. In 1922 a growing village required its streets to be named and numbered and the excitement, can be imagined, when, in 1927, domestic THE KIPPER ON JERUSALEM ISLAND electricity came to the village.

In 1952, to mark the Coronation of Queen Elizabeth II, Jerusalem Island was gifted to the Parish Council. The Plesiosaurus sign was erected. Few villages can have such a notable memorial of the coronation as The Kipper. Beautifully maintained by the Gardening Club, Jerusalem is the focal point for our Village's individual history and identity. Mrs Frances Davis was elected as the first woman to chair the Council.

In 1960 a resident offered a generous gift towards building a Village Hall, but the Council decided not to proceed. In 1999 it now seeks an office and perhaps regrets its predecessor's decision.
In 1964, Council and residents were powerless to resist Dr Beeching's axe and Barrow lost its well-used railway station. Thirty years later, a NEW station opened at Grove Lane as the Ivanhoe Line restored Barrow's rail link.
The Garden of Rest provides an oasis of peace in the village centre and resulted from Council's efforts in opening a previously closed part of the Churchyard.
A site for the County Library was identified in North Street and the building opened in 1969.

The Front Gardens competition was introduced and ran for several years. 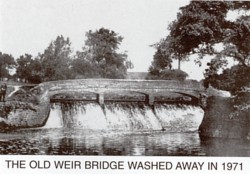 1974 a huge number of villagers overflowed a Public Meeting to discuss with representatives of British Gypsum their plans for a gypsum mine and factory. Though vigorously opposed, these consents were both finally granted and the buildings tower over the outskirts of Barrow.
The first Civic Service was held in 1974 and continues annually.
As the 70's ended, grants made to the Youth Club assisted it to relocate to Humphrey Perkins High School campus.
The Village Rights of Way footpath walks were established and together with the Annual Cycle Rides, started in 1986, remain very popular.
The Cemetery was extended and finally purchased by the Council.
Ongoing representations saw the pedestrian crossings installed and flood alleviation work undertaken.

Throughout the 90's the Council's workload steadily increased as the Village grew. The much admired Christmas lights blossomed from a modest beginning and the Culverts off Mill Lane were taken-over.
1994 saw the Parish Council Centenary, and one hundreds years' service to the Community were marked by the installation of the Doomsday Book in the Library.

Centenary Year saw a new initiative. At the instigation of the Parish Council a Twinning Committee was formed and its hard work culminated in the formal twinning of Barrow-upon-Soar with Marans in France. The Charter was signed in 1996 in Barrow and the following year in Marans by Brian Henman the chairman of the Parish Council and Bernard Boucherau the Mayor of Marans. This followed forty years of school exchange visits. The Mayor formally opened the Roundhouse museum, housing the Village Map.

In 1995 Redland's plan to develop twenty-five acres of land at Slash Lane for industrial use met with reservations. The Council took the bold decision to hold a referendum and residents voted three to one against, with a sixty percent response.
Motorists' interests were not forgotten as the Council joined Charnwood Borough to purchase jointly the Old Station car park. 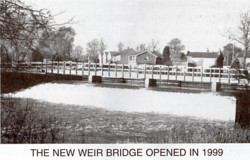 Some twenty five years after its destruction, the new Weir Bridge opened in March 1999, following a vigorous campaign by Parish Council and residents to British Waterways. Funding assistance towards its £46,000 cost came from County and Borough Councils and
the Ramblers Association.

The Great Rookery footpath saga became a cause celebre as its continued temporary closure (from 1987) was featured on local and national television and debated in Parliament. The Parish Council and Councillor A.J. Earl are mentioned in Hansard. Will the year 2000 at last see it re-opened?

Our young people were not forgotten. New play equipment was installed on King George V. recreation ground; the area fenced and the eagerly awaited basketball court installed. A small play area on Brook Lane came into use. A leisure and informal play area, on land at Fishpool Way, was considered, but not pursued. A project for the future

In 1999 the Council embarked on an ambitious scheme to enhance the High Street and Three Crowns area with new street furniture, the County Council providing traffic calming and improved lighting. Mr Tom Rennocks donated a hand carved village sign. Proposals to create a new Village Green in Industry Square were well received.
A Millennium Committee will oversee a year of village celebration and provide a lasting Millennium memorial, while the Village Design Statement Team labour to improve the future look of Barrow. Both are Parish Council supported initiatives.

The Power of the Parish Council is limited, but its influence is considerable. Changes in Local Government in the 21st Century will offer new challenges and opportunities. In all these changes the Parish Council remains the GRASS ROOTS OF DEMOCRACY today as in former times.

Chairman of The Parish Council over The Last 50 Years