The Twinning Association was formed in January 1994 to strengthen and extend the friendship which already existed between the people of Barrow-upon-Soar and the people of Marans in Charente Maritime.

Humphrey Perkins School and the College Maurice Calmel had been involved in school exchanges since 1957. In the early days of the exchange both sets of pupils spent a month in their partner school. Unfortunately, recently, with the demands of the National Curriculum and SATS, much shorter visits have become the norm.

In 1992 during a visit one of the French teachers accompanying the children, Jean-Pierre Mechin, approached Brian Henman, the Chairman of the Parish Council ,with a message from Bernard Bouchereau, the Mayor of Marans, suggesting that the two communities should twin. It took some time to form a committee of enthusiastic people to develop the project. However the first meeting eventually took place in January 1994.The first committee was Sue Rodgers,Chair, John Wilford, vice-chair, Kathryn Timmons, secretary, Brian Henman, treasurer, Krysia Ball, Gill and Arthur Gardner, John Kinch and Sue Wilford. The Parish Council gave some financial support to get the committee off the ground. We set about organising social events with a French theme to make people in the village aware of our existence, as well as to raise money of our own.

The first official visit took place in August 1995 when a small group of people went from Barrow to Marans to meet the mayor to discuss how we might proceed. Some of our group already had friends in Marans so had an opportunity to renew old friendships, others made new friendships. We agreed that the official Twinning would take place in Barrow in November (2nd-4th) 1996 when our French friends would have a short holiday for All Saints.

We set about our plans with great enthusiasm, there was so much to do to make sure that the whole weekend was a success. We had to find accommodation for our French visitors and organise a programme of events to welcome them. We decided to hold the twinning ceremony in Holy Trinity church, which proved to be a very popular choice. The church was full for the event and was a perfect setting. We walked to church on a beautiful Saturday morning; the weather was very kind to us, the sky was blue and the sun shone. We were welcomed by the church bells and a beautifully decorated church. 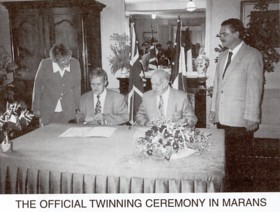 We had agreed with the Community Association that the Mayor of Marans would formally open the Round House immediately after the Twinning ceremony . It had been a guiding principle of all our plans that none of the official events would take place outside Barrow. We went therefore from the Round House to Hall Orchard School for the lunch. We had a musical greeting from the children at the school. The school hall had been decorated by the children and there were displays on a French theme throughout the school. The evening celebration was a Barn Dance at Humphrey Perkins School where John Kinch called for the dances and had chosen dances which would make sure that people from both communities mixed. During the evening a prize was given to the two shop keepers whose shop windows had been judged as the most attractive in the shop window competition. The younger members of the Twinning Committee had organised this event, in which the shopkeepers in the village were invited to decorate their windows on a French theme. This all added to the good atmosphere which pervaded the village and made our French visitors feel welcome. Though the visit was very short we were very happy with everything which had happened, our guests had felt very welcome and were able to have a taste of English life.

Before we could officially declare ourselves twinned there had to be a Twinning Ceremony in France . We chose the following summer for the return visit. About thirty of us travelled to Marans where a whole series of surprises awaited us. For example on the first evening we were treated to a local speciality for our supper when we saw mussels cooked on large boards under a fire made from pine cones and vine prunings. This was followed by a whole sheep which had been cooking slowly on a spit during the afternoon. The main events of the weekend happened on Saturday. When we arrived at the square in front of the Town Hall we were greeted by the Town Band (the Fanfare) who led us through the park into, appropriately enough , the room which is used for civil weddings. There Bernard Bouchereau and Brian Henman, signed the two copies of the charter.This was followed by the planting of a tree, (a gift from the Barrow Twinning Committee to the people of Marans) in the park in front of the Town Hall to commemorate the event. The next surprise came when Brian Henman was asked to unveil a new sign , which revealed that a square in Marans had been renamed ‘Place Barrow-upon-Soar'. The surprises continued throughout the weekend, but perhaps the most important memories are the welcome and the friendship we were shown.

Since that weekend there have been two outstanding events. First of all the visit of the Barrow scouts to Marans in the summer of 1998 where they received great hospitality and were able to sample a wide range of activities, all of which had been organised by the Marans Twinning Committee . In November 1998 the Fanfare and Harmonie bands ,who had played during the twinning ceremonies in Marans 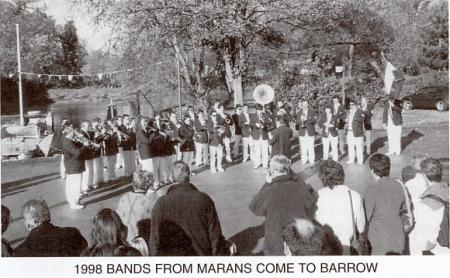 came to Barrow and treated us to a splendid concert in Holy Trinity church and awoke the village on Sunday morning as they marched through the streets to the Riverside .

Our hopes for the future are to continue to develop the links between the two communities and to enable as many people as possible to be involved in the exchanges .