The W.I. was founded in Canada in 1897, but it was 1915 before the first British Institute was formed, and that was in Wales! Membership is open to all country-loving women, wherever they live, whatever their age or interest. It is completely independent, non-political and non-sectarian. The aim of the organisation is to improve the quality of rural life by means of the fuller education of country women. Denman College, the W.I.’s adult education centre, was opened in 1948. Over 200 courses are held each year on a variety of subjects and more than 4,500 students attend them.

Barrow W.I. was formed in April 1949, and celebrated it’s Golden Jubilee with a party at Humphrey Perkins School. Founder member and first President, Mrs. F.E. Davis, is still an active and very valued member, along with two other founder members, Mrs. V. Barker and Mrs. M. Lockton. In the early days, monthly meetings regularly attracted in excess of 80 members and visitors, though nowadays, depending on the subject, they tend to average about 30. There is always a wide variety of speakers, with something for everyone. Often the least appealing turn out to be the most memorable, so the simple message is “never judge a book by its cover”! Over the years, topics have varied considerably. In 1952, 80 members packed into the Working Mens Club on Melton Road to witness a demonstration of a Hoover washing machine! However, many old favourites crop up year after year. Cookery, beauty tips, gardening, crafts like sewing, knitting, canvas work and patchwork, flower arranging, travel and wildlife are as popular now as they were back in 1949. In 1950, over 60 members hoped for a solution when gathered to hear a talk on “Problems parents have to solve.” Some things never change!

Not all the activities take place in Barrow. Our Institute is one of nine in the Soar Valley Group, which itself is part of the Leicestershire and Rutland Federation. This, in turn, belongs to the National Federation of Women’s Institutes, it does not even end there, since the Associated Country Women of the World links over 9 million women in over 60 countries. What a way to make new friends!

The social side is obviously very popular. Outings, parties, celebrity speakers, competitions – there is never a shortage of participants. Outings, like speakers, vary 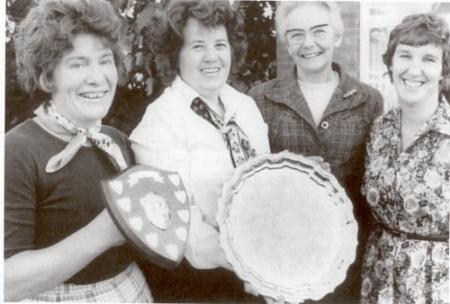 and are usually by request. Derbyshire is always a favourite, not only for the wonderful scenery and abundance of stately homes, but also for it’s close proximity and ease of access. For sheer prettiness, and for being so very typically English, many members feel the Cotswolds take some beating. Visits to local and nationally known industries are also well patronised. Party invitations to other Institutes are quickly accepted and Barrow W.I. has acquired a reputation for providing super spreads, hence no shortage of other Institutes accepting invitations to our parties! There are also plenty of opportunities to take part in competitions. The Institute won the Radio Leicester Wizz Quiz in 1981 and 1988, and in 1989 won the Grand Final for the third time. We even provided questions for the W.I. round in the preliminaries of the 1989 series! The artists came to the fore with their designs for a poster and a banner which promoted the W.I., and many members have surprised themselves on discovering what they were capable of doing.

Despite being a registered charity, the W.I. can always be relied upon to help others. Since its formation, the Institute has been involved with several charitable organisations including St. Dunstans, Pestalozzi, Red Cross, Headway, and most recently locally based LOROS and Rainbows.

Education can come in many different guises. The Institute provides a bursary for members applying for and being accepted by Denman College for one of the many courses on offer. But education can also be provided much nearer to home. Many members with individual skills are only too happy to pass on their knowledge, and 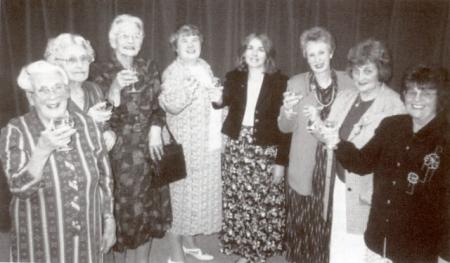 other members wishing to learn different crafts have benefited from small groups held in members own homes. In addition, the Group stage “See and Do” evenings at regular intervals. Due to the splendid facilities provided, these usually take place at Humphrey Perkins School – very convenient for Barrow members! Recently, members have become proficient in sugar craft, canvas work, lace making, and decoupage, as a result of these classes.

Not only do members share their skills, they also shared something rather unusual by todays standards. In 1950, members decided to make a special cake to mark their 1st birthday. Post War Britain was still suffering from food shortages, and cake ingredients were in short supply, so members were asked to donate “points” from their Ration Books, to enable sufficient ingredients to be purchased. Without hesitation, members gladly gave of their rations and in one way or another have been giving ever since. This is what the W.I. is all about, the opportunity to work together, to hopefully make the world a better place.

On 14th July, 1969, twenty years after its formation, the Institute held its first meeting at the Bishop Beveridge Club, and has stayed there ever since. Meetings are held on the second Monday of every month.