Barrow Playgroup ("Playgroup") was formed in 1971. It was the brainchild of Judith Rodgers who with others opened the first playgroup in the village on 6th October 1971.

The Methodist Church Sunday School Room was the first venue despite it being a long narrow dark place (other venues having been ruled out). There was one toilet outside and therefore the group could only have 12 children at each session. The toys were stored in a tiny shed beside the toilet. Rules and regulations abounded back in the early '70's as now and a playgroup inspector visited to approve the premises.

Two groups of children were catered for (attending either Monday/Wednesday or Tuesday/Thursday) and two pairs of supervisors were appointed to supervise them. A mother rota was set up as everyone was to have some supervision involvement; in those days that involved every mother having a chest X-ray as a clean set of lungs was a requirement if you were to supervise other people's children (a hangover from the days of consumption).

The first supervisors were paid ten bob (50p) a session. Marlene Alcock replaced one of the first supervisors a few months into the life of Playgroup and remained a supervisor at the Monday/Wednesday session at the Methodist Church rooms as we approached the millennium.

Playgroup is still run by a group of volunteer parents (usually mothers) who automatically become trustees of the charity and therefore bound by the legal responsibilities and duties of the Charities Acts. Each parent cannot serve for more than three years consecutively (which tends to coincide with their children's attendance at Playgroup). As a result it is quite a feat that Playgroup has managed to operate so effectively over so many years. The present committee consists of a chairperson, secretary, a registrar for each venue, treasurer, two fundraisers and an equipment buyer. Two supervisor representatives attend the committee meetings as the committee and supervisors work closely together on many Playgroup matters.

Playgroup is registered with Social Services. Their staff inspect each venue each year and check out the supervisors on appointment. Playgroup is a member of the Pre-school Learning Alliance which is a national organisation representing the interests of playgroups and providing invaluable advice in these ever more regulated days. As the committee are the employers of the supervisors it has employment issues to get to grips with including Inland Revenue requirements and more recently the minimum wage (unfortunately due to the charitable nature of Playgroup the supervisors' pay remains paltry as in 1971).

In 1995 Playgroup formalised its charitable nature by becoming a registered charity. This required the ratification of Playgroup’s constitution and more lately the provision of more detailed accounts each year with an independent examiner’s report as well as a comprehensive annual report.

Playgroup income consists principally of fees for the sessions and fundraising which usually involves the children in some way i.e. a sponsored trike ride or “Coffee with Santa” where the children can hook a duck, search for buried treasure and meet Santa himself. Back in the 1970’s similar fundraising took place. One event, which is to be resurrected for the millennium year, is a pancake race in February. This used to be held in Wycliffe Avenue. Summer day trips to local places of interest have been held over the years. Two buses full used to go in the early days but later on trips were not so popular, possibly due to more people having access to cars. However the present committee have plans to try again and summer 1999 will see many mums, carers and children trip off to Manor Farm in East Leake.

Today Playgroup runs morning sessions at two venues in the village: the (new) Methodist Church rooms and Humphrey Perkins Community Lounge. In 1992 Barrow playgroup merged with the Church Rooms Playgroup which ran morning sessions at the Church Rooms in Church Street. Unfortunately due to falling numbers the Church Rooms venue was closed in 1997. The other venues continue to thrive however despite the opening of Fourfold (the pre-school attached to Hall Orchard Primary) and more and more competition from private nurseries which are open all day. 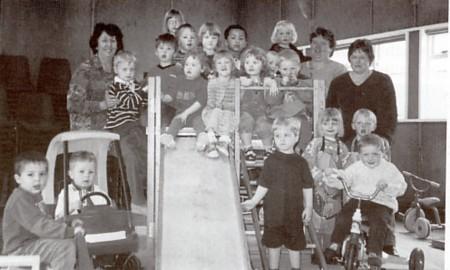 Children can attend Playgroup from 21/2 years (as long as they are dry in the day) until 5 years. The morning sessions run from 9.15am until 11.45am. A broad curriculum of play opportunities is offered with toys and imaginative play, craft activities, socialising, sharing, discipline and routine. The aim of Playgroup remains as it has throughout it’s history which is to enhance the development and education of the children, to provide good quality care in a safe environment and to provide equal opportunities for all cultures and abilities without discrimination. More simply, in most cases Playgroup is that first step by little ones away from their regular carer to the care of the Playgroup supervisors with the gentle introduction to forming relationships with other adults and their peers through play. Hopefully with the millennium baby boom Playgroup will go on to provide this vital service to both children and parents alike for many years to come.