Barrow-upon-Soar Parochial School opened in 1859. The earliest written record is in June 1863 when John Dixon was Principal Teacher. There was an average of 85 children on the school register with attendance often affected by the agricultural year - pea pulling and potato picking, for example. The Victorian version of an OFSTED Inspection in 1865

reported `The state of the school is on the whole very satisfactory'! The school grew in numbers to 170 at the turn of the century with Frank Austin designated as Headmaster (serving for 33 years as Head). Buildings on both Cotes Road and Church Street continued to offer schooling for Infants and Mixed, with regular official Registration checks and formal inspections.

World War I Food Committees in 1917-18 used the school and staff for distribution of food ration papers and the November Armistice Day half day holiday coincided with no coal for heating! The entire school had to cluster around the single coke `Tortoise' burner that winter.
In 1939, the outbreak of World War II saw the school, with Mrs M Jewell as Headmistress, host to evacuees from Sheffield. Air Raid Shelter for the children was provided in the cellars of the Vicarage and the Three Tuns Public House. The school had anti-blast wire netting fitted over all windows and sandbags stacked in front of the main door. Eventually, all windows were boarded up and school carried on under electric lights! With Mr E Barker in charge of the main building with 166 pupils and 112 on the roll in the other one, the post war period reflected continued growth in Barrow. 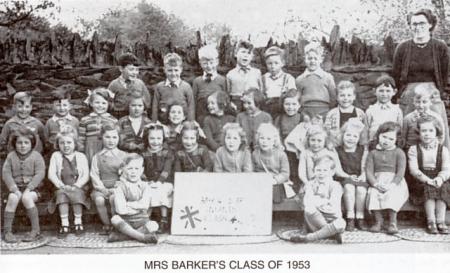 Hall Orchard CE Controlled Primary School came into being on 20 August 1969 when the schools became one in the brand new building plus Victorian Annexe. After 27 years, Mr Barker retired when Colin Jeffries was appointed in 1972. Numbers on the roll increased to 400+ at one point, averaging 350 by 1989 when Bob Morley was appointed upon Mr Jeffries' retirement. Major developments took place in 1994 with a new building and play area and the average summer term roll rose to 470 children.
The National Curriculum, Local Management of Schools, National Testing, OFSTED Inspections, League tables, new Special Needs systems have changed the world of education forever. The millennium will bring us new legislation centrally and, under the Borough Plan, possible expansion to 540 on roll. So it will be even more important that, in the words of our 1997 Inspection Report, `the school retains a "family" atmosphere'! We are indeed a Family School in a Family Village.