On 1 March 1902 Humphrey Perkins School moved from Thompson's Orchard (now the Conservative Club) to new premises on Cotes Road. The headmaster at this time was Mr Fernsby, the first non-clergy head of the school. The school was the present Old Block which contained the headmaster's living quarters. The opening of the school on Cotes Road also coincided with the first appointment of a lady teacher, Bertha Austin. The new school had 32 boys and one girl, Nora May Wall. 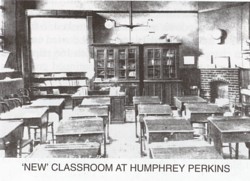 Mr Keeble was the next headmaster and in 1927 he brought in a school uniform consisting of blazer with a badge, ties and caps. "The school at the moment is a happy little family and their manners have improved out of all knowledge". Mr Keeble demanded a complete change of staff to enable him to make the changes he wanted to.

Mr Wilkinson replaced Mr Keeble in 1929. In 1932 the Hall (now the Gym) was opened and in 1939 the Library followed. Miss Walker arrived in 1937 as Senior Mistress and served the school until 1968. From 1947 to 1955 the site housed two separate units - the Grammar School section and the Secondary Modern School section.

Mr Harris became headmaster in 1955 and he introduced Parent Evenings. In 1956 the school became a bi-lateral school.

Mr Dunn became headmaster in 1960. Discussions took place over the next years to decide whether Humphrey Perkins School or Rawlins would become the Upper School in the new Leicestershire System. Finally, in November 1962, the decision was made by the Education Authority that Rawlins would be the Upper School and Humphrey Perkins the High School. The eventual move to becoming a High School took place in 1966 although some pupils over the High school age remained at Humphrey Perkins for another four years. Just before this `change over' Norman Meeke was Head Boy and later returned to the school as a teacher. When Miss Walker retired in 1968 Mr M Morley was appointed as Head of Geography and still serves the school today.

With the raising of the school leaving age to 16 in 1972, Humphrey Perkins became an 11 - 14 Leicestershire High School and so began a period of significant development and change.

The years 1972 - 1974 saw a new management team in position with the appointment of a new Headteacher, Mr F W Morris and two new Deputy Headteachers. When Mr Morris took up his post in 1973 the school had a teaching staff of some 43 teachers. From this time the school population has waxed and waned reaching a high of a thousand and two in 1983. The millennium will see once again a school population of approximately thousand pupils.

Under the guidance of Mr Morris the school moved away from rigid streaming to banding and eventually mixed ability teaching (with some setting in French and mathematics). Along with this came changes in the curriculum, the most significant of which being the disappearance of Latin.
During Mr Morris's headship the school gained Community Centre status, the Parent Teacher Association was formed and the first sponsored walk took place, the proceeds of which went towards the purchase of a minibus. Another first was the introduction of educational visits to centres in Dieppe, Etretat and Pourville. The very first visit, 47 children and three members of staff to Dieppe, had to be aborted as two teachers and some 22 children became ill with a flu bug. The majority of the party were quite familiar with the sick quarters on the boat by the end of the return journey. Mention must also be made of the annual French exchange with pupils from Marans in France, an initiative started by Miss M Walker some years previously, and the annual visit to Switzerland led by Mr R Print. Both of these visits continued into the 1990's.
In January 1984 the school had its first Headmistress, Miss E M Higginbotham who had formerly been at De Lisle School in Loughborough. Miss Higginbotham continued the developmental work of the previous head and saw through the introduction of the National Curriculum. Community activities at this time flourished.
The 1990's saw the appointment of Mr T J Riddiough (1991 - 1998) as Headteacher and the schools first OFSTED inspection. 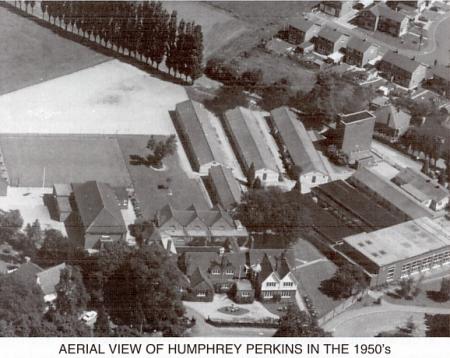 Were Mr Marshall, Deputy Head until 1974, to return to Humphrey Perkins he could be forgiven for feeling a little lost. The horsa huts put up at the end of the war, initially for a period of ten years, have come tumbling down and been replaced by a new humanities block, two new science laboratories and a new dinning hall/drama studio. Add to this the two additional science laboratories and the mathematics accommodation constructed in 1999 and the transformation is complete.
The oldest part of the school, Old Block a listed building has not been without its problems. On one occasion in a little over 10 minutes a wall cracked from top to bottom and on others ceilings came down around our ears. Many blamed the old lime workings while others think it might be the result of Gypsum Mining. The most likely cause is simply the shrinkage of clay following a period of prolonged drought. 1999 has seen a massive under pinning operation of old block to prevent further deterioration.
One of the more surprising events of these years was the buckling of the `state¬of-the-art' sprung floor which had been put into the new dinning hall/drama studio. It resembled a roller coaster ride with tables and chairs all akimbo. However, the most dramatic and most mysterious event of all has to be the disappearance of some 30,000 gallons of water from the swimming pool. To this day there have been no traces of its whereabouts - not even a damp patch. 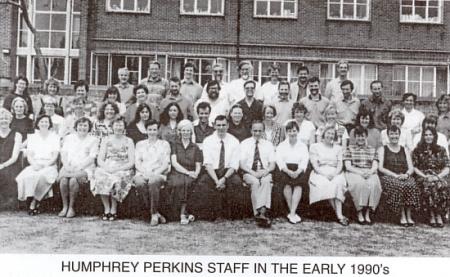 As 1999 draws to a close the school has another Headteacher, Mr D Edwards, appointed in August 1998, to take it forward into the new millennium and all that it has to offer.