I was born in Kegworth. My mother had lived in Kegworth most of her life. My father was a transport manager for Trent Gravels near Beeston Nottinghamshire.

I was born in Loughborough. My mother was a hosiery worker. My father was a fitter in Herbert Morris's.

My father started car repairs at home. He dug a pit in the garage so he could get underneath the cars. In the War (WW2) he tunnelled out and built an underground shelter. He reinforced the roof with car springs and he always said that if a bomb hit them it would bounce back up. The War was a major part of our childhood. I remember in 1940 going out blackberrying and being machine gunned by a plane. All our relatives lived in Birmingham and we often visited them. I remember the streets lined with dustbins and with chimneys. They were burning old oil to make a smoke screen to hide the city from the bombers. I remember, too, the night that Coventry was bombed - you could see the glow of Coventry burning even from Leicester.

Don Mitchell (then aged about 10)

I remember the War too - the gas masks issued to children, the food rationing and collecting coal from the gasworks in a pram. I remember my mother going by bus to Leeds because she'd heard a rumour that Lewis's were selling extra sugar and she wanted some to make jam.

Barbara Mitchell (then aged about 6)

We were very conscious of the War (WW2). Everyone lived around the wireless. We never missed a news bulletin as there was so much happening. Lots of young men in the street had gone to the War so we wanted to know what was happening. If someone got a letter or bad news, everyone knew. In 1943 I passed the exam and went to Humphrey Perkins. It was a Grammar School then costing £5 a term. I had a second hand uniform. Luckily my sisters were working in the factories and bringing in money so the family could afford to send me. No one in the family had been to a Grammar School before. No one in the family went to the Library or read many books. We weren't that sort of family.

I was born in Loughborough in 1944. My father originated from Clipston near Market Harborough and was a grocer at the Loughborough Co-op. My mother was born in Loughborough, the daughter of a cobbler. Her mother died young after falling down the cellar steps. In 1945 my father moved to Barrow to be the Manager of George Hill's grocery shop in South St (near Bishop Blaise). The family settled into a tied house at 7 South St.

I was born in 1946 in Loughborough. My father was a `handcrane' (pulley block) salesman for Herbert Morris. My mother was `in service' as a maid until she was married. Due to my father's disability he was off work for about six years so there was no income. They moved to new Council Houses in Shelthorpe when I was 2 years old. It was wonderful. We had 3 bedrooms. our own bathroom and a garden. There was a wonderful community spirit: street parties, collections for funerals. seaside visits: Everyone knew each other and helped each other. We had little spare money. A lot of my clothes were hand-me-down from my sister. When my sandals got too small my mother would cut the toes out so they would last longer! 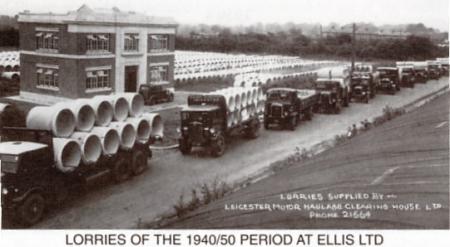 All my relations were teachers so everyone assumed I would be a teacher. I had no choice. I really wanted to write and have an outdoor life like my grandfather. I won prizes for poetry (in Welsh) at the Eisteddford. In 1945 I went to Aberystwyth University to do Teacher Training but made friends with agricultural students. I packed in teacher training to switch to agriculture and was accepted but they refused to transfer my scholarship. So I went back to Woodhouse Eaves to work on a farm near the farm on which my grandfather was waggoner and bailiff. I started in 1947, which was a very bad winter. I spent the first 8 weeks carting water and food, with horse and cart, to animals in deep snow. Cold and miserable but thoroughly enjoyed it. I was virtually my own boss. I was the cowman and going out almost every day with the dog and the gun. I loved hunting. Still do.

Patrick Wainright (then in early 20s)

At 20 I was called-up for War Service. I ended-up as a Surveyor's Clerk in the Royal Engineers in Glasgow. I wouldn't have got out of Barrow but for that.

I was in the Army as a signaller with the Leicestershire Regiment and during the War I used to be sent the local paper. I saw a photo of a young woman who worked at Newbold and Burton's. I didn't recognise her so I tore it out and kept it. Some time later, while on leave, I was introduced to Dorothy by a friend and two days later we met again at a village Comforts Fund dance and I realised it was a photo of her.

Meeting one another was such a lovely occasion. Often wondered what I'd do after the War. Meeting Denis, together with Church filled my life.

I was one of the first to join Barrow Scouts. It was started by two students from the Brush. I stayed until I left school. My mother didn't want me to go to Humphrey Perkins. She didn't rate it. She wanted me to get out of the village (she was from Shepshed) so I went to Loughborough College School. They had a practical workshop in Fredrick St and that's where I was first introduced to plumbing. I loved it nearly as much as sport. I wanted to be a Physical Training Instructor (PTI) but that would have meant going to University. Instead, I got a job in the College as an Apprentice Plumber.

My great-grandmother ran the Trap/Lime Kiln Inn from 1911 to 1947. My grandmother worked at Drivers and in the pub.  My father was born in the pub in one of the rooms overlooking Breadcroft Lane.  Most of the family worked at Drivers.. My grandmother took early retirement at 80!  I later worked for the brewery who owned the pub and my daughter is a licensed publican.  My father was a keen footballer and sportsman.  He came 3rd in the all-England schoolboy games in Southend.

The welcome home invitation and photo has 1945 written on the back, and my father is in the Centre of the Front Row of the photo.