I left school at 14 and started as an Apprentice Engraver with a company in Leicester. In 1953 I left to do my National Service and served in Germany and Malaya at the end of the Malaysian crisis. Then went back to engraving. In the late 50's my father bought Harris's Garage in Barrow and asked me to join him. It wasn't an easy decision to go and work with my father but, in the end, I agreed.

I left home at 16 and came to Leicester to train as a nurse. It was the longest journey I had ever made. The Leicester Infirmary had a good reputation as a nursing school. A lot of the Sisters were ex-Army: very strict but very effective. My mother contacted the nearest Methodist Church who invited me and my friends to the Church. That's where I met Don. Six nurses went to the Church and met 6 young men, 4 couples eventually got married. Don and I married at Trinity Methodist in Leicester in 1957. We moved into a new Jelson house in Narborough South. We were allowed 3 power points: 1 in the kitchen, 1 in the lounge and 1 upstairs on the landing. Anything else was charged extra. Our first piece of furniture was a garden chair. Don's dad gave it to us. We both sat on it and it broke. In 1959 Nicholas was born and I stopped nursing.

Barbara Mitchell (then in her early 20's)

My first school had 40 children in the class. I remember sandpits and colouring in. On the first day our teacher, Miss Jones, said we had to pair-up with someone we knew and share a coat peg. I only knew boys so I had to share with a boy. It was very embarrassing. We were told to write our names and draw a pattern around it. It cost l d (old money) to get a bus to school. You could buy 4 chews or sherbet dips for a penny.
In the Junior school, 3 of us went into the toilets at lunchtime, which was not allowed. The teacher caught us, lined us up, we lifted our skirts and she slapped us hard on top of the legs. There were big red marks. It wouldn't happen now.

I was brought up a Catholic. Early memories are of attending the Catholic Primary School and Church at least once a week. At 10 I became an altar boy and then had to attend more often. It was something you accepted. A way of life.

I stayed on at Humphrey Perkins into the science 6th form to do A level's. 5 of us started and 3 finished. I was the only girl but that was no problem. I was always a feminist but never a "women's libber". There was no careers counselling in those days. The woodwork teacher suggested Dispensing Chemist. I liked Chemistry so thought, why not?
Staying on at school caused problems in the family. My mother said I should leave to get a job. My father said no, let her stay on and be further educated. Very surprised that my mother gave way as she was the dominant one in the family. I was lucky.
I signed a 2 years Apprenticeship as a trainee Dispensing Chemist with Timothy Whites and Taylors in Leicester. I was paid £2.1Os.Od per week in the first year and £3 per week in the second. I won a prize of £40 at the end of the second year so was very well off. Later we were introduced to the shop counter and customers. Lowly apprentices were not allowed to meet customers! I then did 2 years full-time at the School of Pharmacy, which included an examination to see if we could read badly written prescriptions in Latin. At age 21 I qualified and became a Manager of a small chemists. £14 per week was good money. I gave £10 to my mother and kept £4 for myself (Cinema on Saturday, Chapel on Sunday and a bit of courting - I had met Les, 10 years older, at a village dance in Sileby). Les and I decided to get married so started saving - £4 to mother and £10 to me from then on.
In 1958 we got married and moved into a newish bungalow in Syston. Les had had his eye on an old house in Barrow but it was sold before we could buy it. I was relieved because I preferred a new house.

I was born in Cumbria in 1948. We lived on the edge of Egremont (near Whitehaven and Sellafield). My boyhood was very exciting - we played in the fields, built camps, chopped down trees for Bonfire Night. We were all in and out of each other's houses. Doors were only locked at night. We had home-grown entertainment like our parents. You made your own games. Not glued to a computer or mass entertainment. I wouldn't let Lucy (my daughter) do these things. You hear such stories now. It's so dangerous now. My sister was a tomboy and did the same as us. I'd be worried now. 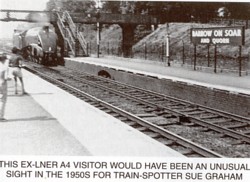 I was born in 1952. I had a quiet, home based childhood. We played in friends' houses. Played with dolls and made homes for them and us in houses. I liked to go train spotting with Richard (my brother). The railway was only 100 yards away. We shared a bike and were allowed to go up and down Warner Street, where we lived, on the pavement. Dad always saw dangers but we felt very grown up. We were a Church based family so Church activities figured strongly. I felt secure. I loved to draw the curtains and be a family. We lived in the back room, kept the front room for best. Only used it on a Sunday. It took ages to get warm. One of the best things I remember is having the bathroom built when I was 5. The toilet was out the back. I wanted Mum to stay with me, as I was scared.

My father had a car - not many people did in those days - so I was lucky and went on family holidays from an early age. Eventually my parents got a caravan near Conway in North Wales and that became a favourite holiday. I was one of those people who enjoyed just about everything. School, Baptist Church, Sunday School, Scouts and especially sport.
I passed the 11+ exam and went to Humphrey Perkins. It was then (1955) in transition from a Grammar School to a Bi-lateral School (the Leicestershire Plan was a forerunner of the Comprehensive School scheme). I think it my good fortune to have had all my schooling in Barrow as it meant I could get up late and wasted no time travelling.
I was reasonably bright but did no work. I even failed the Woodwork exam at O-Level!
I didn't want to stay on to the 6th Form and my parents were keen for me to get a job. Lots of my friends were joiners and said it was a good job. So I left at 16 and got an Apprenticeship at Schofield Brothers in Loughborough.

John Wilford (then in his teens)

I had flat feet - they used to line you up at school and do medical checks - so was sent to the Cripple's Guild in Packe St (now St John's Ambulance centre). Can you imagine what would happen if someone tried to call it that nowadays? I had to sit on the floor and pick up marbles with my toes and put them in a tin. At Sunday School parties we were made to eat brown bread and butter with jelly. I was about 6 years old and I hated it.

The farmer lost his wife and decided to sell-up. I didn't want to work for the new owner - he wanted a tax loss, not a farm - so I ate humble pie and went to work in an office for Leics. County Council. I lived with friends and went fishing and shooting when I wanted. Great bachelor life. Happy to be single.

Patrick Wainright (then in his late 20s)

I was living in Luton and working as a Teacher when I met and married Peter. He was doing his PhD so we couldn't afford to have children early. We waited till we could afford a house then had Deborah and Christopher.

Pat Wainright (then in late 20s)

After we married we lived with my parents in their council house in Sileby Rd. Richard and Susan (Sue) were born. In 1953 we moved into 40 Warner St. There was a big copper in the kitchen and a shallow sink. We changed it for a deep sink. There were no electric points in the house when we moved in, only gas. Harry Graham wired it for us, 1 point in each room. The electric cooker had a fan which kept your feet warm when working at the sink. I never went back to work after the children but I kept up with my village things. I became Superintendent of the Baptists' Sunday School. We put on lots of activities in the weekdays for children after school. They made their own way to and from school in those days. They came to the Church for an hour or so after school. During this time Denis was helping with the Scouts. In 1953 we went next door to watch the Coronation on a black and white TV We didn't have a TV We got our first TV in 1960.

Dorothy Hudson (then in her 30s)

I loved football. The high spot was to be picked for the England Youth Team. I played 5 matches before getting too old. I was an inside forward. I was quick and I could score. I was chased by Liverpool and Leicester and signed for both which caused a problem! I was still an Apprentice Plumber but ended-up with City as a full-time professional. I never got into the First Team. They had a big squad and I didn't get on with the manager. I met Mary at a Sileby dance. Another bloke brought her but I took her home. At 21 I was called-up and went into the Royal Engineers not as a Plumber. I was based in Farnborough. I played too much football - three times a week and twice at the weekend. I was semi-professional and paid £5 a week. When I left I couldn't get back into City so I went non-league. I played for a team near Tamworth and was paid £9 per week which was more than I was getting as a plumber. Mary and I married at Rempstone (I was 23, she was 18). I still had 9 months to do in the Army. She stayed with her parents. Dad lent us the money to buy a house - 9 Church St. - and when I left the Army I started again at the College then moved to the Brush working on locomotives. There was five miles of pipework in a loco. In those days you couldn't get a plumber locally to save your life. They all worked at the Brush. Stella was born two weeks after I left the Army, on Christmas Day. I was away playing football. After Stella was born Mary went back to work at Ted Clark's newsagents (where the opticians is now in the High St.) as soon as she could. Later, Mary went as a hosiery operator at Taylors in Sileby.