I was born, the second of eight children, at Garforth, a mining village near Leeds. My father was a maintenance fitter. My mother's father was an opera singer with the Army in WW1. After the War, he left my grandmother and his 5 children. They went to live with my grandmother's brother. That was quite common in those days. My uncle ran the Post Office and the family had 2 maids - one for washing and one for cleaning. In those days, if a hearse went down the street everyone stopped to line the street and all the men removed their hats. You don't see that anymore.

I was born at Braunstone, Leicester the son of Harry (`Les') who then worked as an AA Patrolman. I remember at 7 years old getting 1 penny a week pocket money and, for that, you could get a quarter of sweets or 4 sticks of rock. We got a fortnight off school every Autumn during the war for potato picking. 6 old pence a day. It was good money.

My parents met on a blind date. He was a student at Sutton Bonnington Agricultural College. She was a Secretary at the Brush. Grandfather was a farmer on the Duke of Portland's estate in Worksop. It was a very strict family - you weren't allowed to speak at mealtimes. In 1933 grandfather was killed in a farm accident.
He had a bad hip due to a fall from a horse and he couldn't run. He set fire to a field of stubble and was trapped and killed. Father didn't want to take on the farm so he went into animal feedstock as a salesman. I remember my parents saying that they had an ATS girl billeted with them during WW2. She was always washing her hair which people didn't do very often in those days.

I was born in Sileby, youngest daughter of shoe operatives in local factories. My father had been gassed and shell-shocked in WW1. Every night he sang popular songs in his sleep. At 3 years old I fell downstairs and damaged my eye. Had 4 operations to correct my `turned eye' but none was successful. 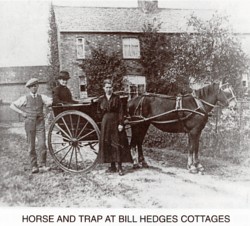 I would have liked to have been an actress but I don't think I would have made it with my eye. There are disabled stars now but not many. Was that cowardice or pragmatism? I can't decide. Times were hard then. My father only worked 2 days a fortnight so there was no spare money. We had no bathroom. On bath night, the children took turns sharing the water in a tin tub by the fire. As the youngest, I was either first, and boiled alive in the hot water or last and had the cold and scummy water. I still hate bathing!
Despite being poor we had a great time as children. Lots of freedom to roam and play in the streets and fields. We went to the cinema 3 times a week - there were no 'X-rated' films in those days.

At 20 years old, my father developed curvature of the spine. This made him permanently bent over and he had to walk with 2 sticks. The treatment in those days was to put him in a plaster cast to prevent him becoming even more bent over. The result was that his spine fused in a curve so he could never straighten. Nowadays they make you exercise to keep the spine loose. Anyway, he was sent to Buxton to bathe in the mineral waters as part of the treatment. While there he met a young woman from Kidsgrove, Staffordshire. She heard this wonderful voice and turned around to see my father. They fell in love and married within months much to the dismay of her family as she was marrying a cripple!

I left school at 14. I'd wanted to train as a teacher but Humphrey Perkins cost £10 pa so it was impossible to stay on. I went to work at Newbold and Burton's shoe factory in Sileby. I soon moved into the office as an accounts clerk. I did evening classes to better myself.

I was born in 1932 at 32 Church St, Barrow. Mum and Dad worked in the shoe trade. Dad did a lot of boxing. They had a ring in a big room behind the Fox Inn in North St. Used to box there. He never drank.