It is a condition of new building developments that the developer must pay for a detailed archaeological examination of the site. This is to record anything of importance before it is destroyed by the building work. Danny McAree of the Northamptonshire Archaeological Service led the excavation. 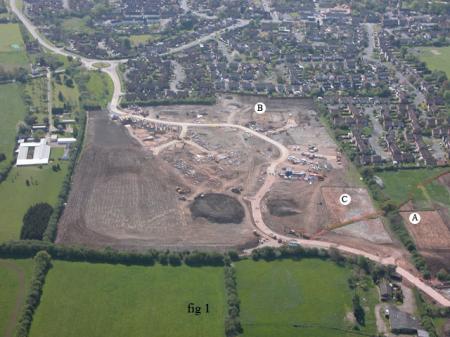 Figure 1 is an aerial photograph of the site, spanning two fields either side of Strancliffe Lane. Some parts of the site have had the topsoil stripped off to enable Danny and his team to see and get at the archaeology underneath. Danny will be writing a report, which we will see in a few months time and he is also offering to give us a presentation on his work at Willow Way. This article is a taster based on conversations with Danny about the areas marked A, B and C in fig. 1.

Area A revealed remains of what Danny thinks is an Iron Age hut surrounded by small fields. Other such huts have been found in Barrow, showing that people have lived here for thousands of years. In the centre of the hut was found a burnt and broken stone. Despite the fact
that the period is known as the Iron Age, few people could afford iron, so they would mostly cook in pottery bowls filled with water, which they boiled with stones heated in the fire – the origin of ‘pot boiler'! 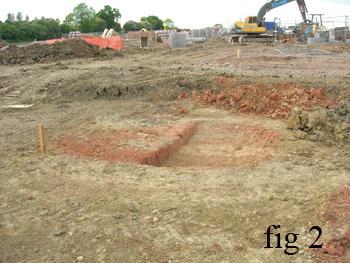 In Area B they found red circles of burnt soil, along with traces of coal. Not a lot to see as you notice in fig. 2, and these have since been built over. These burnt circles are the remains of an early form of lime kiln also known as sod or clamp  kilns, and are evidence of small-scale lime workings in the Middle Ages. Maybe a few men would rent a field and dig for limestone which, locally, was about 3-4 metres below ground. They dug out the limestone (delved for it) and made a simple kiln nearby. This was made by digging a small, round hole which was filled with kindling and coal, then covered with limestone and sods of turf in alternate layers and lit. It would have smouldered for days before the limestone was sufficiently dry to become quicklime for use as a kind of fertiliser on their fields, or as mortar for building. 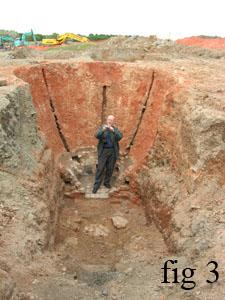 Area C is the most exciting. Here Danny found the limekiln shown in fig.3. This is a sophisticated type of kiln, which may have been used in the mid-1800s (exact dating awaited). Peter Yates is shown in the photo to give it scale! The half that has survived shows the cone shape: Danny suspects that the top half was an inverted cone, so that the whole thing would have looked like an egg. Steps lead down to the base where Peteris standing. The kiln was lined with bricks – the eggshell – but most of these have been removed and possibly reused, when the kiln was no longer needed. So, what you see is the mould of the kiln, like a giant fossil. It was surrounded and supported by quarry waste back-filled around the brick lining. You can also see the vertical slots in the walls. These are the remains of internal flues, taking heat up into the middle of the kiln. This one would have been loaded from an open hole at the top, alternating with layers of coal and limestone. A fire was lit at thebottom and the burning controlled so that the fire did not escape from the top. As the limestone dried and crumbled, it was removed at the base, so more coal and limestone could be tipped in at the top. This type of kiln was kept burning for weeks as a continuous process, and would produce a very high grade quicklime.

Another kiln of the later style was found nearer Cotes Road, between Strancliffe Lane and Brooker's Nursery (fig. 4), which shows the approach to the kiln. You can see the steep ramp, revetted each side by rough stone and brick walls which were usually removed before the
abandonment and back-filling of the kiln. These bricks were often reused on the next kiln.

[Other types of kiln were found, but did not photograph satisfactorily, so we have not described them here]

The surprising fact is that Danny found over 30 kilns, of at least 4 types, in these two fields. Together they show that limestone was being worked in Barrow over many centuries. Apparently, they are intriguing kiln specialists, as ours are a little different from most other kilns found around the country. Danny is convinced that other fields – if explored as thoroughly – would show similar evidence of lime-working. What's more, although we have maps of old lime-workings around Barrow, most of the kilns found so far are NOT shown on the maps! So there must be more out there, waiting to be found. That's why Danny is asking for any information we can give him such as old photos or memories of the kilns. The information might help him piece together missing details –like was the kiln really as egg-shaped as he thinks? He is away in China for a while, looking at the terracotta army, so this could give you time to recollect anything. If you do remember, please contact me (Terri Davies, Archaeology Warden, 18, Cotes Rd.) and I can pass it all on to Danny. Thank you in advance. 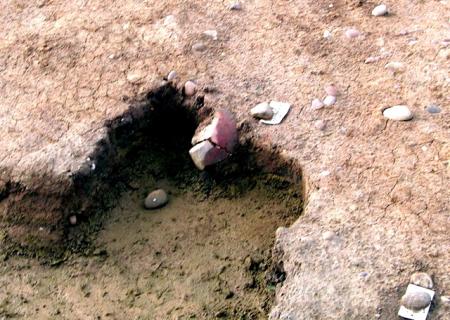 This is a genuine Iron Age pot-boiler found in the middle of a hut circle!
It was heated in a fire then dropped into a water filled container
(prob pottery) to heat the water. This one shows heat marks and is shattered by rapid cooling. It inspired me to think that , one day, we could organise a community event eating with the ancestors using ancient recipes and cooking methods. 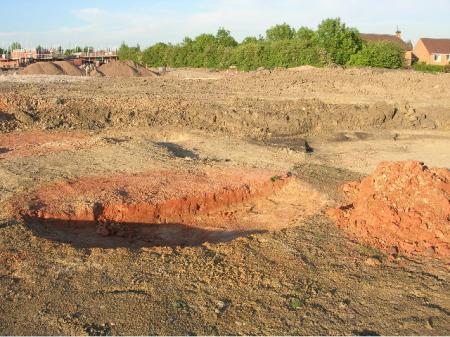 This is the remains of a pit or clamp kiln. A shallow pit was dug, about 2 metres round, which was filled with wood and coal covered with slabs of limestone and topped by a layer of sods to keep the heat in (rather like a charcoal kiln). You can see the burnt earth clearly.
Half has been excavated to show the depth of the effect and the absence of any sort of brick or stone structure. It produced fairly low grade quick lime. The dark patches, behind, are the remains of a coal heap. This sort of kiln was used in the Middle Ages. They were built as and when needed. They reveal an extensive ‘cottage industry' of small-scale workings across the hillside.
There must have been hundreds of these kilns made and abandoned over the years. 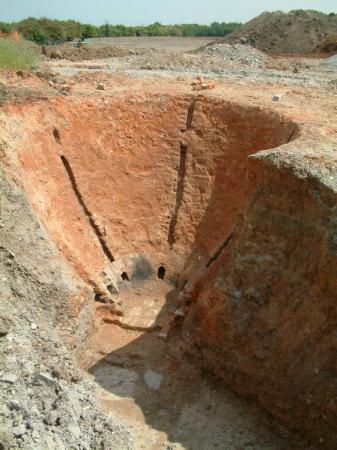 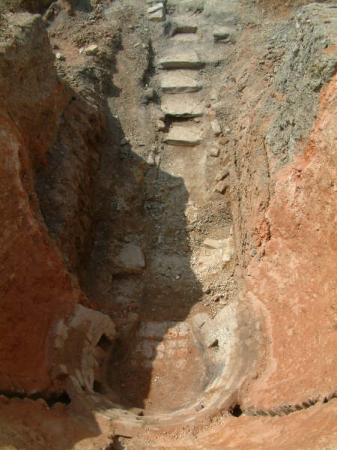