The manufacture of knitted goods was the last branch of the textile industry to adapt to mechanical power. Yarn spinning had been done by water power from the 1770s and by steam power from the earliest years of the nineteenth century but as the widespread use of steam-driven knitting frames did not develop until the later years of the nineteenth century, the industry never passed through a water powered phase.
Experiments with power-driven knitting frames were numerous during the nineteenth century. Marc Isambard Brunel was granted a patent in 1816 for a steam-powered circular machine, but the problems of the industry at this period presumably prevented its adoption. The idea of a circular machine was taken up again in the late 1830s since it could operate faster than a flat machine which involved a series of discontinuous movements. More circular machines were adopted after Matthew Townshend invented the latch needle in 1847. On this type of needle the barb was operated by the yarn itself as the loops passed over it in a similar manner to a modern rug hook. The presser bar to close the needle beards was no longer necessary and so circular machines using latch needles were simpler to operate. Power-driven hosiery factories were opened in the middle decades of the nineteenth century but the machines could knit only circular fabric which was not shaped in any way and so it was used for cut-ups. Fashioned articles were still made on the hand frame and so inventors concentrated on the problem of widening and narrowing fabric automatically. Arthur Paget of Loughborough and Luke Barton of Hyson Green, Nottingham, both solved the problem of narrowing fabric in the same year, 1857, Paget producing a one-off machine and Barton a wide frame producing several lengths at once. Another Loughborough manufacturer, William Cotton, first solved the widening problem and then in 1864 received a patent for automatic narrowing and widening using a fine-gauge frame. His machine still made use of Lee's spring bearded needles, but they were placed vertically in the frame and the sinkers horizontally, with the bar to which the sinkers were attached acting as a presser to close the needle beards. The apparatus for transferring loops to narrow and widen fabric hung above the row of needles and could be adjusted at the turn of a screw. Cotton's machine was soon widely adopted in the hosiery trade and he established a separate factory which was producing a hundred machines a year by the late 1870s

LEFT: Hinckley in Leicestershire probably preserves the typical industrial landscape of steam powered hosiery production better than anywhere else in the East Midlands. This small factory preserves a wall-mounted crane for hositing yarn to the top floor. 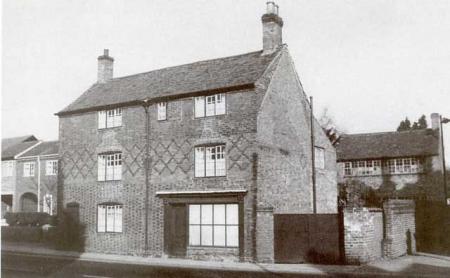 The days of the hand frame were therefore numbered, but only changes in the organisation of the industry could permit the full exploitation of the new machines. Felkin had suggested in 1844 that only the concentration of frames in shops and adapting them to steam power would improve conditions in the industry, but this was difficult to achieve while hosiers and middlemen still had a vested interest in renting out frames. Attempts had been made during the 1850s to abolish this rent but without success. In the 1870s a parliamentary commission was appointed to enquire into the persistence of truck in mining areas, and this was extended into hosiery areas, where it was claimed that frame rent was a peculiar kind of truck. Several manufacturers gave evidence, including A. J. Mundella, a Nottingham manufacturer who was also Member of Parliament for Sheffield. He said that steam frames would eventually do away with frame rent altogether, but on surviving hand frames it should be a matter of negotiation, not a legal deduction. The commission, however, decided on outright abolition, which was done by Act of Parliament in 1874. This undoubtedly hastened the demise of the hand frame, but the process was speeded up even further by the Education Acts of the 1870s, which extended the practice of elementary education, making schooling compulsory until the age of ten. Knitters were therefore prevented from using their children as bobbin winders and seamers, and the family unit of production was irrevocably broken.

William Cotton invented the basic knitting machine movements used in modern equipment. He moved to this factory in Pinfold Gate, Loughborough, in the 1880s. The different buildings are identified in the engraving and include a forge,needle and sinker departments and several erecting shops. 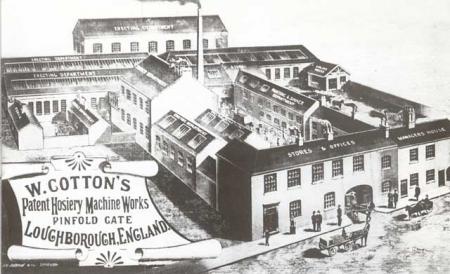 Factories developed extensively during the 1880s and 1890s. Many were small, built by bag hosiers who had previously employed knitters working their frames in scattered houses and shops. Others were large, employing thousands of hands. The early factories can often be recognised by the domestic style of their windows, and these were many in number since light was as important in the factory as in the workshop. Most had large chimneys for the boilers which provided steam for the machines. Carved and moulded bricks were widely used on buildings at this period, and many of these late nineteenth-century factories are very pleasing in appearance.
Factory production brought about a radical change in the nature of the work force employed in the hosiery industry. Power-driven machines did not need the application of human muscle and so could be looked after by women rather than men. The number of men employed in hosiery was halved in the final decades of the nineteenth century, but fortunately the problem of unemployment was not as great as it might have been because new industries provided alternative work. Some men went into the boot and shoe industry, particularly in Leicestershire, where it was expanding rapidly in the years around 1900. Engineering absorbed many others, particularly those in the ancillary trades of framesmith and sinker maker, where they had learnt the necessary skills. The result was a new prosperity for the East Midlands with both men and women finding adequate employment. Both public buildings and housing of the late nineteenth and early twentieth centuries in the area bear solid witness to this prosperity and contrast sharply with the dire distress of the framework knitters as reported in the 1844 commission report.
During the twentieth century the industry has had to adapt itself further on many occasions, particularly to the use of synthetic yarns as well as to changes in fashion far more frequent than in the nineteenth century. However, the world recession has affected the textile industry as it has many others, with imports of cheaply produced knitted fabrics making times hard for the hosiery industry. Many factories have closed and, where they have not been demolished, are now in multiple occupation by small firms producing goods other than hosiery. Once again, unemployment is a serious problem in the East Midlands and technical improvements are not likely to be the solution.
However, a few East Midland firms still use hand frames to make shawls and fancy knitwear and they have adapted powered machines to produce similar fabrics. Their order books are full, particularly for the export market, and their knitted fabrics are used in the latest fashions in Paris and New York. Four hundred years after William Lee invented the knitting frame, goods produced on very similar machines still have a part to play in the world market.