I was born in 1922 in the cottages below the Three Crowns, and later moved across to number 7 Cotes Road. My aunt, Sarah Geary, kept the King Bill. When I was three, my dad had to go to Markfield isolation hospital and my mother had just had a new baby, so aunt Sarah looked after me. One of her customers had a bad cold and in those days mulled ale was a well-known remedy. I was 3 at the time, and was sitting in my pyjamas by the fire in the living room of the pub when she came in to put a red-hot poker into a jug of ale. Unfortunately, she tripped as she left and spilled hot beer over me. I still have the scars 78 years later – not many people can say they have been scalded by beer! Sarah’s daughter married a Mr Merriman, who had one of the first cars in the village – a bull-nosed Morris.

Mr and Mrs Arnold Squires kept the King William IV after Mrs Geary. They moved to the Windmill pub by the brook in Wymeswold , and kept pigs. We used to go there on holiday, living in a tent behind the pub. I remember that in the 1940s Mr Sanders had the Bishop Blaize, Mr Freer had the Navigation, and Mr Halliday kept the Railway (Soar Bridge). A real gentleman, Jack Illston, kept the Three Crowns at the same time as aunt Sarah had the King Bill. He had a horse and dray, coaches and Landaus (open carriages). Some were kept in the coach-house, which is now the pub restaurant (fig 3),

and others in Melton Road. He was also the village undertaker. He would pick up parcels in the village for the fast train from Loughborough to London and would deliver any that came back. He kept racing pigeons, and when I was about 10 he would take me on some journeys as a treat. When we reached Cotes, he would let the pigeons out of their wicker basket, and joked that if they didn’t come back he would shoot the lot!

When I was young we used to play “pin and button”. We were rather naughty, because we would take a piece of thread, pin it to the woodwork of someone’s window, and loop the thread around a button. Then we would pull on the thread and tap on the window so they would come out to see who was there (we were hiding). We played this trick on Mr Stocks who was the lock-keeper. We took the cotton from the lock-keeper’s cottage over the bridge by the lock (entrance to Proctor’s caravan park) and pulled from the other side. When he came out, we pulled the thread taut so he couldn’t see the button, but one of the lads with me laughed. We all ran into the fields (now Proctor’s) thinking we were safe, but no, Mr Stocks fetched his wife to stand on the bridge, and then went up to the next bridge by the Navigation. We were trapped, and had to walk across the fields to Mountsorrel before we could get home. We were late back and got the expected belting.

There was a sweetshop in the front room of one of the cottages opposite the boathouse (now the Riverside Inn), which was kept by my aunt, Mrs Caunt. 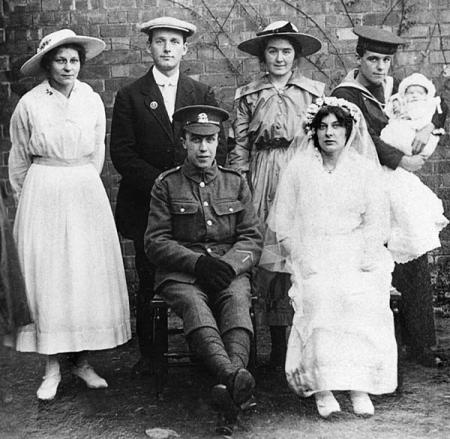 I and two of my three brothers were in the church choir when it went on strike – there was an article about it on the front page of the Leicester Evening Mail. Mr Moore, the choirmaster (whose son is a well known author) had been sacked. He was not reinstated, and we never went back. The vicar was Rev Thomas. Mum used to give us a penny to buy liquorice, and my brother was caught eating it during a sermon. Afterwards, the vicar said to him “I am going to fine you seriously – one halfpenny”. We only got paid a penny for each service, which went towards church outings, so it WAS serious!

My brother Gilford played football for Barrow on a field on Sanders’ farm. One day he had a bad cold and couldn’t play. However, he turned up to watch, and the opponents arrived with only 10 men. He agreed to play for them in his day-clothes, and got very wet, letting his clothes dry on him before coming home. On the Monday he developed rheumatic fever and spent 12 months in bed including two long spells in hospital. Doctor Grey, the village GP visited him 3 times a day, even on Sundays. When Gilf was finally better, mother asked Dr Grey for his bill: he said “Mrs Pearson, forget it”. I can still remember her tears of relief and gratitude.

A Mrs Dilks made ice cream in the cottage at number 5 Cotes Road, which her son sold from a tricycle. Cornets were a halfpenny and a penny, and wafers were twopence. It was all made from fresh full-cream milk from Sanders’ farm. We used to help churn it so we could lick the scrapings afterwards. 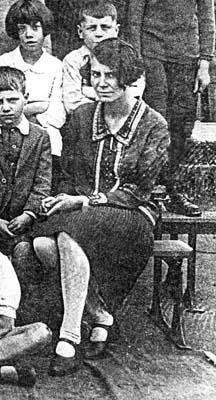 I remember the junior school mistresses Miss Page and Mrs Mason (pictured ca 1931, fig 5), and the village bobbies, PCs Childs and Ainsworth – they’d give you a clip round the ear if they found you misbehaving.

I left Barrow during the Second World War. Prior to joining the RAF I was conscripted into the Home Guard. We spent our nights in the clock tower of Quorn Kennels, looking for Germans – I don’t know what we’d have done if we saw one, as we never had any guns!

I moved to my present house in Loughborough in 1950. Harry Litherland was a chimney sweep who lived opposite the Hammer and Pincers in the yard behind Mrs Basford’s shop. He came to sweep a chimney opposite my house while there were workmen on the roof. As he put the brush up, the workmen unscrewed it. He said to the lady of the house “I’ve lost the brush, I’ll have to put the scraper up to remove it”. Of course, when the scraper emerged, the workmen took it off and put the brush back on. The sweep then said “This house is haunted – I’m off”… and he went!

My sincere thanks to Ralph and his wife for their hospitality and help with this article.
The final photo (fig 6) shows Ralph in 1935. Young Mr Sanders is the son of the Landlord of the Bishop Blaise. I am planning an article on this pub, so if anyone has stories or information, I shall be pleased to include them. 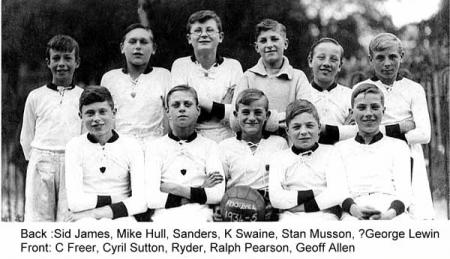