The stocking frame was one of the first technological developments in the textile industries, dating from the reign of the first Queen Elizabeth. It was probably invented in the East Midlands, but certainly knitted garments became one of the main products of the region from the seventeenth century on-wards. The frame was intended for use in the home and the whole family was involved, the men working the frame while their wives and children wound bobbins and seamed stockings. The following articles explain how the stocking frame worked, describes the lives of the knitters and illustrates the kinds of buildings in which knitting was done. Since the hosiery industry was the last of the textile industries to mechanise, many of these family workshops remain. There are some interesting places to visit both in Britain and Europe where the hand process is still demonstrated. 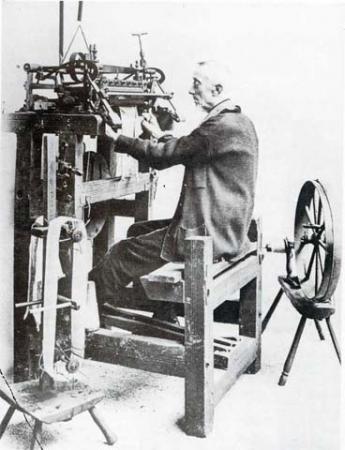 Working a hand frame was a strenuous occupation. The knitter used both feet to operate the treadles and both arms to move the heavy iron carriage on its wooden frame. To the left of the frame is a floor vice and to the right a bobbin winder, adapted from an old spinning wheel: these were used to transfer yarn from hanks to bobbins for use on the frame.


Previous menu page: Round House
Next page: Framework Knitters – Report of the Commissioners to the House of Lords, 1845.