A glimpse of the past 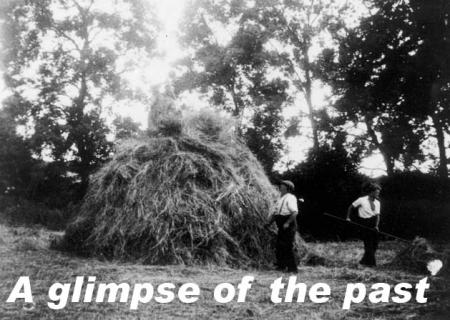 In a sense my life has now turned full circle. Born into a farming family I enjoyed childhood in the fifties on my father's farm (Elms Lodge) on Pawdy Lane, (the old and correct spelling of the lane). After leaving Humphrey Perkins School, I set about a career in education, lecturing in farm mechanisation, first in Wiltshire then latterly at Brooksby College. After the death of my father I returned to the farm where I am today.

Farmers were honest and reliable in the past 50 years, agriculture like most other industries has changed almost beyond recognition, driven in large part by economics and facilitated by mechanisation but also by social and demographic changes as well as aspiration. Men like my father who farmed at that time were different from the farmers of today- they were totally self-reliant – they had to be because telephones were few and far between, consequently help was not easily at hand. Also, not being bound by countless rules and regulations they were virtually a law unto themselves on their own land with one consequence that they were not always the easiest people to deal with. But they were hardworking, capable, honest and reliable. Fifty years ago farming was very labourintensive. Although mechanisation has been, to some degree, ongoing through history, it received a critical impetus after the war with the shortage of labour. Land girls had taken the place of men on the farm at this time but were keen in most part to get back to more traditional women's work. A farm labourer's life was not an easy one. Hopes and aspirations after the previous few years of hardship were high for a better standard of life and that did not necessarily gel with farm work. A good example of the way things have changed is to look at haymaking, now largely superseded by silage although not entirely, as silage is not suitable for all stock and farming practices.

Up until the early fifties my father and uncles still used heavy horses, (in our case we had shires). These had been the main motive power for centuries along with bullocks, which were inferior both in power and temperament, although they were dual purpose in that you could eat them if they became too obstreperous.

The mower used was a finger bar type; its cutting action resembled that of several pairs of scissors on a bed about 4 or 5 ft long. There was a perforated metal seat on the machine usually spelling out the manufacturer’s name (now very collectable) from which the operator controlled the lifting and lowering of the knife bed and the threeabreast horses. After mowing the grass, it was left to dry for a couple of days before it was tedded. The tedder or side rake, as it was sometimes called due to its action, rolled over and fluffed up the hay row allowing it to dry quicker. It also had a perforated metal seat on which the operator sat. From here you would operate the machine and control the single horse or pony, which pulled it.

When the hay was dry it was gathered using a hay sweep, a wooden implement with tines at the front to do the work and handles at the back which you controlled the machine with as you walked along behind it also controlling the horse which was pulling in front of the tines. The hay was gathered and stacked into cobs (small stacks) which gave it some weather protection until you had time to make the proper haystack. This involved dragging the cobs to the site of the stack by placing a rope around the base. Because the hay in the cob had usually had time to settle before you moved it, most times it did move as one lump.

As the main stack grew in height it became necessary to erect a pole and grab system. This consisted of a telegraph pole on top of which was a pulley. A rope was threaded through the pulley, one end was attached to the horse and the other to the grab. This was a large metal-lined device as the name suggests capable of opening and grabbing a load of hay. Then as the horse walked away from the pole, the grab was pulled via the pulley up the pole until it reached the working height of the stack. With the aid of a second rope it was swung out over the stack and at the same time the grab opened discharging the hay.

After completing the haystack and before winter set in, it would be thatched using straw from that summer’s harvest. It was possible to use the straw for thatching because it had been cut with a binder which leaves the stalk straight and unbroken. Modern combine harvesters break the stalks up so they could no longer be used for thatching hay stacks. Finally when you wanted to feed the hay you would cut sections out of the stack using a hay knife.

Compare all this work with the current practice of simply rolling up the hay into large round bales and stacking them into a Dutch barn using a tractor and fore end loader. To use a bale for feeding, the tractor is just used again to get it out and dump it.

I said earlier that men like my father were different to the farmers of today, and I think you can get an inkling of what I mean by understanding how the nature and constraints of their working life has changed.