The Community Association organised a lot of social events. The New Year's Eve dances were a sell-out. People fought for tickets. But over time we had more and more trouble with the Local Education Authority about fees and caretaker's costs. Everything got more and more expensive. The big event was the Festival which was built around races (lOmls, 4mls, and 1 mile) organised by Mike Morley and colleagues at Humphrey Perkins School. They did a great job and the Community Association arranged the stalls and other events. It was very successful in the early years. The Festival raised over £40,000 for charities in its eleven year span from 1983-1994. I stopped being Chairman in 1986 on my 40th birthday. I wanted to do something new. I joined Quorn Angling Society but soon became secretary. You'd think I'd never learn!

Joanna went to University in 1989. We were so pleased. We'd always hoped she'd do better than we did. Nobody on Geoffs side had been to University. She met her future husband there. They live and work in Bristol.

After I'd completed my Apprenticeship, I'd worked for several building companies working my way up to being a Manager but in 1984 I was made redundant for the third time and thought, that's enough, I'll work for myself from now on! So that's what I did. I set-up as a self-employed joiner working from home. It wasn't easy and you are never certain where the next job is coming from. I've done a mixture of contract work for builders, jobs for local people and one day a week I taught at Southfields College. Still do.

In those days you didn't talk about being made redundant. The first few years of John being self-employed were very worrying. Was the work going to be there? There was no holiday pay or sick pay. It's much more common now and people are more ready to talk about such things. There's no longer a job for life. When we started work there was little unemployment. Losing a job was no big issue. Always another one to be had.

In 1980 the Barrow Health Centre opened after many years in the planning. We had 2 GPs, myself as Practice Nurse and a receptionist (now there are 9 full time staff). In the 80s Nicholas and Jenny both got married. Jenny met her husband at Rawlins. They now live at Woodhouse Eaves. Nicholas got married at Stoke Poges Church (scene of Gray's Elergy, the poem) and held his reception at the golf club where scenes for Goldfinger were filmed. They now have 3 children each. Jenny is a nurse too. Nicholas lives at Haslemere and works as an environmental consultant.

We moved to Barrow from Oadby in 1981. Dad's sister lived in Welland Rd. Turlington's house (the blacksmith's in Church St) came up for sale and we bought it. My parents still live there.

My earliest memory was of the Hall Orchard School Caretaker dressing up as Father Christmas. I asked him if he was Father Christmas. "No", he said, "he's busy. I have to stand in for him". At Hall Orchard I was badly behaved. Then I was diagnosed as dyslexic and not just thick! That made me feel a lot better and I settled down. They gave me special classes and easier books. Later I went to Rawlins where the English teacher used to pick on me to read aloud in class. It was impossible. Just mean of her.

I had no interest in school. I was always the smallest and was picked upon by other lads. I was a bit mischievous as you are at that age. I'd sit at the back of the class and not pay attention. I liked cross-country running but developed fluid on the knee which eventually turned to bone. I can't kneel properly now. At Rawlins I was still one of the smallest - 4'10" at 16 - so I was given growth hormones. I've grown into a fine stallion but still a complete loon. No evidence of CJD yet. It made me feel a lot more confident.

I found it hard to understand why Sue wanted to go out to work after we had the children. I was brought up to think of myself as the breadwinner. I didn't want my wife to have to go out to work. Now we couldn't manage without it. 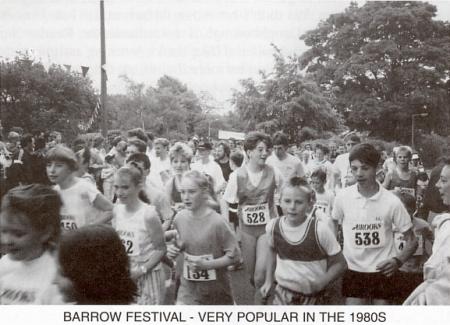 Duncan Graham (then in mid 30s)

I've liked growing up in Barrow. It's not like a really big village. I knew lots of people. Lots of people my age. I always recognise people when I walk down the street. Granddad collected me from playschool. I went to their house after school. I think its nice to have your family near you. Mum went out to work but there was

always someone to look after us. We never suffered. I heard my Dad talking about his childhood. It wasn't like that for us. We didn't go and play in fields or make camps. Just not the kind of thing you do. There are more exciting things to do now.