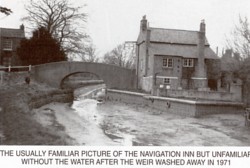 Our first son, Ian, was born in 1971. Shortly after he became very ill and was severely disabled as a result. Ian needed constant care, lots of hospital visits. I was always having to farm Neil, our second son, out which was not good for him. My sister had a handicapped child of her own so she couldn't help. There was little back up from the agencies in those days. Things have improved dramatically since then I'm glad to say.

Sue Wilford (then aged about 30)

Joanna was born in 1971, Fiona in 1975. 1978 I became playgroup leader in the Methodist Church rooms. For a time I was the Barrow correspondent for the Loughborough Echo. I was paid 3p a line and double if I got anything onto the front page.

In the 70s there was a good social life in the village. Lots of village activities. The Donkey Derby was the forerunner of the Barrow Festival. Jim Crow from Frisby supplied the donkeys. They were ridden by children and people bet on the winner. They raced over 150 yards with 7 or 8 races in the afternoon. It was an occasion for village organisations to raise money for themselves by selling things at stalls or side-shows. The donkey races brought people in. Also, a special event such as Medieval Jousting not on the donkeys ! The planning meetings were held in our house and next I knew I was the Chairman of the Donkey Derby. Eventually I became the Chairman of the Community Association.

Geoff King (then in his early 30s)

In 1971 I bought my own business. I borrowed money and bought the Chemists shop in the High Street in Barrow where Wakeley's the Bakers is now. it was a big step and rare for a woman to run a Chemists in those days. 18 months later we learned there was to be a Health Centre and the shop near the Centre came available. I was very worried that someone else would move in. It was the time that a lot of Asian pharmacists were being chased-out of East Africa and I was worried about the competition. I think I had no choice. I moved into the new premises and started all over again.
The 70s was a prosperous time for Britain and for Barrow. Lots of new shops in the village. It was the happiest time of my life running the business. I loved talking to patients. Still do.

Lilian Middleton (then in her late 30s)

Peter died in 1971. I was 43 and the children 13 and 11. My future was very uncertain to say the least. I had for years been visiting my parents in Sussex and that summer I was introduced to the son of a neighbour of my parents. It was Patrick. He had been going for years, too, to visit his parents but we had never met. The timing was right. 1972 we got married and I moved to join Patrick in Loughborough. I'd got the idea that the Midlands was grim. I was very relieved to find it was not as bad as I'd thought but I still missed the mountains. I eventually got a job teaching part-time at St Winefrides Catholic Primary Junior Mixed at Shepshed even though I wasn't a Catholic.

Pat Wainright (then in her late 40s)

We moved to Barrow in 1978 to get a house big enough for Pat's parents should they wish to live with us. Why Barrow? Well, ever since I'd lived in Woodhouse Eaves I'd come to Barrow every week to get my meat from Harry Lockwood's. You could get the joint you wanted and it was good meat. I sometimes helped with the killing. Living in Barrow saved me making a long journey to the butchers!

Patrick Wainright (then in his late 40s)

I went to Loughborough College, after I left school, to do Hotel Catering and Management. Got a job in a small hotel near Leicester for weekends as work experience before going full time. Then I went to Fisons doing Industrial Catering. I still lived at home. It was the normal thing to do. I was content. I worked part-time doing my own catering for weddings and functions, working from home. A 9 to 5 job didn't suit me. I had to fill the gap. Later still I worked as a housekeeper at the High School. I met Duncan who, at that time, was a metallurgist in a factory in Loughborough.

Stella left school and became an Air Hostess with British Caledonian and then British Airways. 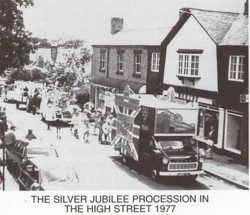 That was the start of our flitting all over the globe. Rio in South America was the first. That was an eye opener. Before that, Stella had been on a school exchange with Marans in France. She opened that door too. We got to know the family Stella had stayed with and we have visited them almost every year since. So I got involved in the Twinning Group with Marans when it started in the 90s.