This article describes the interesting sites which can be seen during a short walk along the river. 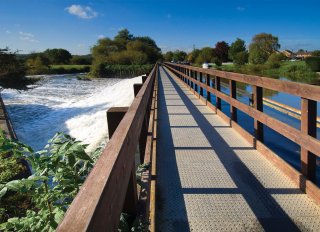 To the people of the village, the stretch of water from the old Soar mouth at Meadow View Farm to the end of the Deeps at the lock and weir has always been regarded as our local waters. The fact that two streams join at the marina is evidence of how man has tidied up the many water courses that once covered the valley floor. There are signs of the old courses ( now filling up ) which once held water for much of the year. Walking along the tow path these days you would not realise that in my younger days (during the war years and the early 50's) much of the tow path was cobbled.

The first point of special interest we reach is the weirs. The old weir and its two quaint brick bridges collapsed during the night of 22/23 March in 1971. This drained the river back to Mountsorrel, and the canal down to the deep lock. The gap left was filled with many tons of granite and rubble and a new weir was built. However the bridge was not replaced until 1999 and opened on May 24th. The river at this point crosses the valley to Quorn and rejoins the canal at Barrow bridge.

A few yards from the weirs we come to the site of the old mill. Over the years the mill basin and the building alongside have had quite a few users, such as the Loughborough College Rowing Club and the Barrow Scouts Canoe Club. At the moment it is run by Barrow Boating for pleasure boats and moorings.

We now have to cross the sluice gates as the old bridges have been removed to give access to boats. We are now at the site of the old mill itself. The only evidence of its existence is the two mill races. The mill was mentioned in the Domesday Book . In its early days it was used for grinding corn, but it changed uses many times. 100 years ago it was bought by the Goodacre family and used for grinding gypsum which was brought by canal from Gotham and Kingston on Soar on their barges Jumbo and Alice. The mill house stands across the road next to the canal bridge and the cottages next to it were built for the mill workers. Charles Goodacre was a notable character in the village. He was a governor of Humphrey Perkins School, a member of Leicestershire County Council and a member of the village adult school.

Evidence of the many years of horse drawn traffic can be seen on the bridge where rope has worn substantial grooves. Looking across the canal at this point we see the Navigation Inn. It is assumed it was built around 1794 at the time of building the canal. However, no actual date has been found. There are however some very old documents kept at the inn which give a good account of various transactions since the early 1800's. 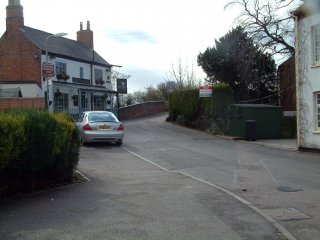 In 1803 on 9th July, John Bradshaw passed it over to his daughter Elizabeth and her husband William Barlow. After that various members of the Bradshaw family seemed to be involved until March 28th 1861 when it was bought by the Leicester Navigation Company.

Sharpe's Brewery of Sileby provided the ales for most of this time until 7th June 1920 when it was bought by Frederic Stenson, a wine and spirit merchant from Loughborough. However on 22nd July 1924 it was bought by James Shipstone and Son.

It remained a Shipstone house until 1978 when Anne Whittingham, the landlady at the time, bought it and it became a Free House. There are a number of old photographs of the 'Navvy' showing evidence of Sharp's Ales and Good Stabling. 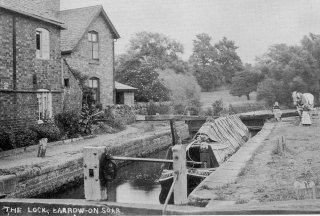 If we now walk under the bridge and along the tow path for about 100 yards, looking across the canal we can see an area of grass, trees and shrubs which is known as Pigs Close or Piets Close. There is some doubt about whether it was common grazing ground for pigs or whether it belonged to a family with the name of Pygge.

Very soon we arrive at Barrow Deep Lock, which is one of the deepest on the navigation. The present lock house is fairly new, and the last family I remember being lock keepers were the Merediths. It is thought that this lock was known as James' lock in earlier days. the gates were last renewed in the 1960's.

The caravan site over this side of the bridge is Proctor's Pleasure Park. It was a thriving park during the post war years providing boating, train rides, a sand pit and various other attractions. Special trains were run form Leicester and Nottingham at weekends in the summer months. Behind the park are fishing lakes from which Wm. Davis extracted sand and gravel. 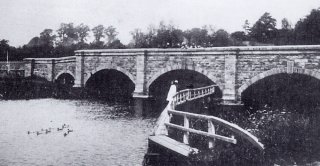 Continuing along the tow path we come to Barrow bridge which was rebult in 1845 with Mountsorrel granite. An earlier, narrower bridge stood further upstream. Before we reach the road there is a small amenity area where once stood a row of cottages known as New Brighton.

We now have to cross the road bridge. As we do we can see the raised flood path which is a reminder of the many years of flooding on this stretch of road; but not happening now due to flood prevention work.

We drop down a slope to the tow path and looking across the river we see the Riverside Inn . Originally it was a coal wharf. It eventually became a boat hire centre, and the owner at that time Mr. Finson, had the cafe built in the early 1930's. The owners in more recent times were the Orton family, who also had a garage over the road, now a Bengali restaurant. 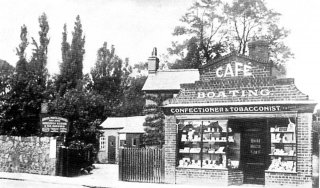 The deeps are so called because they have some of the deepest stretches in the area 12 to 15ft in many parts. This has always been a favourite walking area for locals and visitors due to its scenery and varied wildlife. 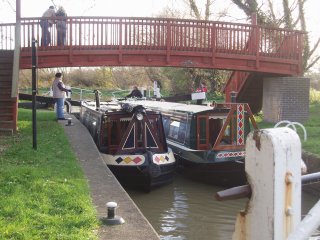 At the end of the deeps we have the shallow locks and weirs. The weirs were fairly shallow and had a special wooden ramp which enabled you to slip your boat up or down to gain access to the stretch of river that runs down to Cotes Mill. The lock is known as Pilling's Lock after a former keeper, however in recent times it has also been known as Pine's lock, after the last family to live there. There were five children, and they had to walk along the tow path to get to school often in harsh winter weather with floods lapping over the banks. The last family to live at Pilling's Lock was Jack & Sarah Meredith the house was demolished in 1957. The weirs and floodgate have now been upgraded to help with flood prevention.