A Guided Walk around Barrow, Seagrave, Sileby and Mountsorrel

An interesting and varied walk from Barrow upon Soar, via Seagrave, Sileby and Mountsorrel, returning along the river valley.

Directions begin at the village car park, adjacent to the Three Crowns Inn, at the corner of Cotes Road and North Street, where you will fi nd ample free parking. 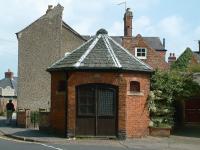 From the car park, cross the High Street and walk up Church Street past the Roundhouse.

The Roundhouse is actually octagonal and was previously used as the village lock-up (a small gaol) as well as for funeral bier storage. The single storey building behind it was once the village smithy.

Turn right past Hall Orchard School down the footpath. (There is no official footpath sign!) Walk straight on into New Street, where, in the distance, you may see water vapour rising from the chimney of the British Gypsum plant.

At the T-junction, turn right into Melton Road and then, almost immediately, cross the road, turning left into the footpath directing you towards Gipsy Lane, Seagrave. At the end of this footpath is another T-junction. Turn left here into Breachfield Road , where very soon you should cross the road and turn right on to an indicated footpath over Fishpool Brook. You will then pass a stile where you walk uphill, following a well-used footpath, to another stile and field.

Continue uphill (ignoring an alternative footpath that branches to the right) and go through the hedge where a bridleway goes left (back towards Melton Road). Ignore this and carry straight on along the ridge where, behind you, to the North, you should be able to see the cooling towers of Ratcliffe Power Station.

After about six way-marked stiles and two farm tracks, the path turns half-right, crosses the next field, (not a very well used path) to the corner diagonally opposite. (The way marker is hard to see here.) Turn left up a narrow footpath which ends with two stiles very close together.

At this point proceed about quarter-right across the field(footpath now not very apparent); the way marker post will be visible in the fence towards which you are walking. Climb over the stile at this point and head straight towards the hedge facing you. When you see a way marker post to your left, head towards it , and, then after passing through a gate, take the right fork (the left goes to Walton) and then over a stile.

The impressive buildings and clock tower that can be seen to your left at this point were formerly the Quorn Hunt buildings. The Quorn Hunt was founded in 1696, by Mr. Thomas Boothby of Tooley Park, Leicestershire, although hunting the fox had taken place on a more informal basis prior to that date. The Hunt takes its name from the village of Quorn, where the hounds were kenneled from 1753 until 1904, at which time it moved to Barrow upon Soar. In 1990 the Hunt moved again to newly built kennels in Kirby Bellars, where it is currently situated. The Quorn is perhaps the most famous hunt in Great Britain, and is widely known far outside the sphere of foxhunting.

Now proceed half-right across the field to a point near the opposite corner. (Alternatively, if in doubt, or wishing to be “farmer friendly”, go fully right and walk round two sides of field.) Go through the fence, where a way marker directs you along the edge of the next field and across a private tarmac road (leading to the Gypsum works).

Pass through the hedge, turn half-right and proceed diagonally across the next field. Again, a way marker post will become visible, indicating the stile which should crossed for access into the next field. This field is crossed diagonally before passing over a stream bridge and meeting the main Seagrave/Walton road T-junction

Now turn right and follow the road through Seagrave.

Seagrave is a village which was given to a mercenary leader as a reward by William the Conqueror. His last direct descendant, Sir Henry Segrave, was the first man in the world to travel at over 200mph on land (1927).

He was killed in 1930 whilst attempting to break his own water speed record on Lake Windermere.

Shortly after passing Church Street on your left, upon which is a welcome refreshment stop called “The White Horse”, turn right at the indicated footpath sign. After crossing seven stiles, one farm track and two stream bridges, and having kept to the left of the fields until the last two, you will arrive in Sileby. Proceed straight on, along well indicated footpaths through parks and housing, until reaching Swan Street at a T-junction.

At the end of King Street, after passing under a railway bridge, turn left on to High Street.

Almost immediately after crossing the road, via a controlled pedestrian crossing, turn right , along the indicated footpath, which will take you across two fields to Mill Lane.

The buildings on the left as you walk along this footpath used to be a Maltings and Brewery until their closure in 1923. They are now being developed into residential dwellings with the facade being retained and restored.

At Mill Lane, turn left and walk towards Sileby Mill boatyard. Cross the River Soar (no signs but path obvious) and turn very sharply right (U-turn) over the last bridge by the lock gates and then on to the towpath.

Sileby Mill boatyard has been in existence since the 1960s, but a mill situated here was mentioned in the Doomsday Book

Keep to the towpath all the way through to Mountsorrel, where there is another welcome refreshment stop - “The Waterside Inn”.

The origin of the name Mountsorrel is, according to one legend, the place where a devil named Bell mounted his sorrel horse before going in “one leap” to a village now called Wanlip; in another leap to land where he burst his girths [Birstall]; and finally in a third leap to a place where he was finally buried - Bell’s grave i.e. Belgrave).

A more mundane explanation is that there was a Norman Castle here called Montsoreau or Mont Sorel. Another possibility is that it is a corruption of the French phrase meaning “sorrel coloured hill”- (after the colour of the rock here. We don’t know for certain which, if any, of these suggestions are correct.

Continue along the towpath, passing under the “1860” conveyor bridge and over the footbridge, through land owned by Barrow Meadowlands (purchased recently by local residents to prevent development), over a weir. (At this point, you will have left the River Soar to walk along a stretch of the Grand Union canal).

The “Grand Union Canal” was formed between 1929 and 1932 by the amalgamation of many old canals. This particular stretch is part of a 15¾ mile canal with 10 locks, which links the Loughborough Navigation and Leicester. The construction of this section was authorised by an Act of Parliament in 1791 and the canal was fully opened in 1794.

Go past “Barrow Boating” (with another possible refreshment stop at the “Barrow Boating Café” or at the “The Navigation” pub), finally reaching Barrow Deep Lock.

At this point, leave the towpath, turning right on to Proctor’s Park Road and, shortly thereafter, turn right on to Bridge Street. Walk up to the Jerusalem roundabout, bear left on to High Street and, finally cross over Cotes Road to reach your original starting point - the “Three Crowns” car park.