A Guilded Walk to Miller's Bridge

As you walk you will see views of the railway, the riverbank and canal, farmland in the floodplain of the River Soar, a marina, new woodland plantings and some allotments.

Directions begin at the village car park, adjacent to the Three Crowns Inn at the corner of Cotes Road and North Street, where you will find ample free parking.

From the car park turn right, along the High Street, to Jerusalem roundabout; turn right on to Bridge Street and continue over the Soar Bridge on the road to Quorn.

Turn right at the other side of the bridge on to the path beside the river and follow this riverside path.

This path can be wet and muddy in the winter months.

It is worth taking a moment as you enter the gateway leading on to the riverside path to look back at Barrow Bridge.

It was built in 1845. This date is engraved, in roman numerals, inside the tunnel of the central arch. The path was the original towpath used by the bargees. Their horses would be attached to the narrow boat by a strong rope so they could haul the boat, along with its cargo, as well as the bargee’s family, through the water. In many places along this stretch of towpath you can still see the original cobblestones of the pathway. Notice how the river has silted up in places on this side of the riverbank. It would have been kept clear when the barges were in use. Note, also, the arches carrying the railway along the river cliff. These were made when the railway was extended to 4 lines in 1868. The stonework you see through the arches is the original, supporting the first pair of lines opened in 1840. 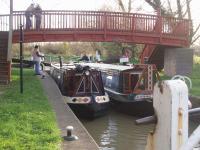 Continue along the towpath towards Pilling’s Lock.

After about half a mile you will see the footbridge over the canal at Pilling’s Lock. Notice the flood displacement weir to the right of this bridge. At this point the canal and the river part company for a while. The canal continues into Loughborough; the river makes a big arc round through Cotes. The two meet again north of Loughborough.

Pilling’s Lock has its gates shut from October to March, the period when the river is likely to flood, and doing this assists British Waterways with its management of the water here. It is worth taking a few minutes to read the BW notice. There used to be a house here where the lock keeper, named Pilling, and his family lived. It was demolished in the 1940s.

On your way take note of the various riverside plants, including Bullrushes, Waterlilies and also the invasive floating Pennywort, which spreads like wildfire.

You may even see mink, foxes and herons. There are also indentations or “swims” amongst the riverside shrubbery to give access for the anglers. 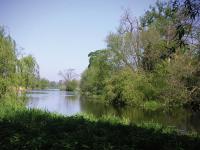 At Pilling’s Lock cross over the bridge (Bridge No. 31) to the towpath on the other side of the canal. Continue to follow the canal path towards Loughborough. The path here is much easier for walking.

Just past Pilling’s Lock, on the opposite side, the makings of a new marina can be seen. Eventually it will have moorings for at least 350 boats.

This area was cleared and re-laid in 2002 and is now safer for walkers as previously there were places where it had almost fallen away into the water. When the new path was established fresh water vegetation was also planted including bright yellow ags or iris, which have spread, and these look magnificent in the early summer months. Note the tree planting in the fields either side of the footpath here. It is part of the National Forest.

The first bridge along here is Top Bridge (Bridge No. 32). Walk under the bridge and continue along the path and you will fairly soon see the next bridge spanning the canal. This bridge doesn’t have a name written on it but according to the map it’s Woodthorpe Bridge.

If you want to shorten the walk you should cross over this bridge and follow the path to point (4). 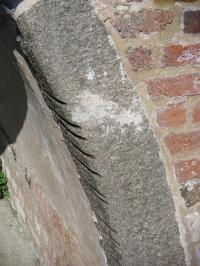 To continue the full walk, pass under the bridge and walk towards Loughborough. The footpath here is not of such a high standard; care must be taken as, in places, it is very narrow and uneven. After walking for about 10 minutes you will arrive at Miller’s Bridge (Bridge No. 34 – rebuilt in the winter of 2005/6). The outskirts of Loughborough can be seen quite clearly from here.

The granite low down on the arch has several grooves worn into it by the tow ropes of the barges. 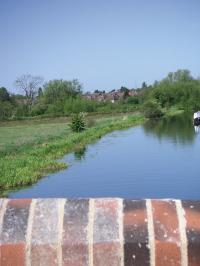 Do not pass under the bridge; leave the towpath at this point.

Go through the gate on your right and, crossing over the bridge to the other side of the canal, turn back towards Barrow by taking the gate on the left and walking down the steps into the field.

In Spring this field is a carpet of lady’s smock flowers (also known as Cuckoo Flower or Milkmaid). In May you can enjoy pink swathes of the now rarely seen Ragged Robin.

Head for the way markers on the opposite side of this field and the fields beyond. This path is well walked and can always be seen clearly, whether the fields have been planted with crops or >as meadow land.

Continue over two more fields, in a straight line, until you reach a junction with the footpath to Woodthorpe Bridge and the Bull-in-the-Hollow farm on the A6 to Loughborough.

At the junction of the footpaths, head half-left alongside the hedge (which runs parallel to a lake which was formed by the extraction of sand and gravel for the Quorn/Mountsorrel bypass). The path leads to a spinney. Then, after leaving the shelter of the evergreens, it is just a short walk across the next field. Head for the way marker and cross the stile into Flesh Hovel Lane.

Flesh Hovel - a strange name. It is believed that the name relates to the fact that when the Quorn Hunt was stabled at Quorn Hall there was a building here where animals were slaughtered and hung until required for feeding the hounds! 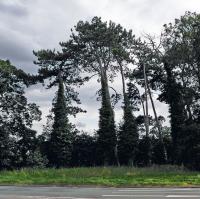 Continue along this lane, beside the well cared for allotments to the main road. Turn left, following the pavement to the roundabout and cross the road to the opposite pavement, where you will see “Three Corner Spinney” - a small collection of pine trees dating from when the road originally allowed traffic in three directions, to Barrow, Quorn North or Quorn South, and before the A6 bypass was constructed.

Many years ago the Romany gypsies would come, at least once a year and set up camp in the spinney for a few days. They would bring their canvas-covered, horse-drawn caravans and arrange them in a circle. They would build a campfire but, when they left, all that remained would be a patch of dead grass to show where they had been. There was never any debris left behind.

Walk left towards Barrow, keeping the granite wall on your right. This wall forms the boundary of Riverside Park, the ground used by Barrow Town Football Teams. As you reach “The Lodge” the footpath becomes a raised walkway known as “the flood path”, named thus for obvious reasons.

When the river floods across the road here, which it used to do every year in the past, using this path helped to keep you dry ….. sometimes!

“The Lodge” is situated at the end of an avenue Horse Chestnut trees. If you walk along this avenue you may notice, in places, the old cobbles the original road. There is, still standing, cast-iron post from one of the old gas lamps, which, it is believed, lit the way for the coaches travelling to Quorn Hall. The way is now blocked by the Quorn/Mountsorrel bypass.

Continue into the village and up Bridge Street, bearing left at the roundabout, and along High Street until you return to your original starting point.