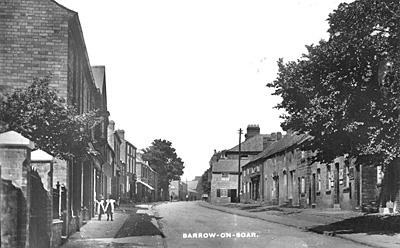 Barrow on Soar. Courtesy of the Records Office for Leicestershire, Leicester & Rutland.

Mrs Holmes: I’d left school at 13, I went down to the factory, my two sisters were working there – Drivers – and I took myself down to get a job at 13, and the manager looked at me and he says, ‘You’re a little ’un’, and he gave me a job. And from then on I went on ‘til I were married.

Interviewer: What were you doing?

Mrs Holmes: Oh all sorts of jobs. He says come and sit with me, so I sat at the side of his counter, counting hose, you know, we made stockings. And eventually they put me on a machine, plain hose machines, just one. And then I went with another women, she’d got six machines, so they put me with her to learn, you see. Anyway, eventually I got some machines of my own, and I worked six machines in the Imperial Room. And then eventually, the person that worked in the same alley – do you know about alleys?

Mrs Holmes: Oh, very primitive. We went at six o’clock in the morning, summer, and worked ‘til six at night, and middle of the afternoon, it’d be about perhaps four o’clock, there used to be a board outside the room, and you put your cans on there with your tea and sugar in. So somebody’d come round with a boiling container and filled all these things up, so we had a drink, you see, and worked until six.

Interviewer: What about breaks, did you have a proper dinner break?

Interviewer: And how much did you get?

Mrs Holmes: When I left I was earning £3 a week regular, and it were a good job, and I were working eight machines for that.