One of Barrow's many `lost' pubs, the King William IV Beer House was situated on the corner of High St. and Church St., opposite the Three Crowns. It is now a private house owned by Jim and Joy Greig. During recent building works, they invited me to take a look at the remaining evidence of its life as a pub.
King William IV reigned from 1830 to 1837 and was Queen Victoria's uncle. He served at sea from the age of 14 until he was 25 when he was made Duke of Clarence. For the next 20 years he lived with an Irish actress called Dorothea Jordan, siring 10 children. He then unexpectedly became next in line for the throne, and had to marry to produce an heir (and to find someone with money to pay off his debts). Unfortunately, his marriage to Adelaide of Saxe-Coburg produced only two daughters who died in infancy. Many pubs were named after this colourful character, including ours, which opened in about 1840.
It is surprisingly difficult to trace the history of pubs and landlords in public records, particularly when they were only Beer Houses rather than fully licensed Inns. However we do know that the King Bill was run by Mary Perkins in 1896, probably by her husband Alfred in 1891, and by Arnold Squires in 1936. The public area consisted of 2 rooms: the Bar, accessed by the front door (fig. I)

which is now bricked up, and the Snug, which was separated from the Bar by a wood and glass partition. Beer was brought up from the cellar in jugs and served at the bar counter. This route to the cellar is now blocked off, but can still be identified. The thralls, on which the barrels stood, are still in the cellar (fig. 2). 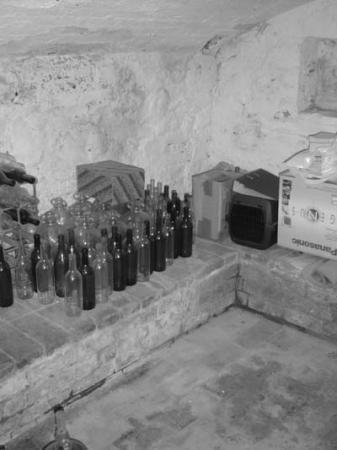 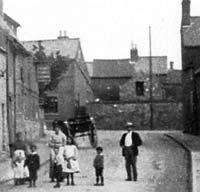 To the right of the house was a skittle alley, visible in the photo taken from Cotes Rd. (fig. 3),

which occupied the site of old stone cottages whose doors and windows can still be seen in the wall between the King Bill and the Alliance and Leicester. A fireplace remains on the back of this wall.

As with many older houses in the village, its construction is a bit of a hotchpotch. The garden wall may well be medieval; the cellar and parts of the lower walls are stone; there is evidence of timber frame and cob (mud and straw) (fig. 4); 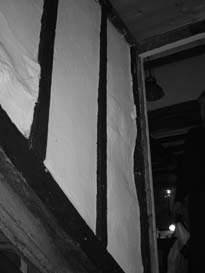 much of the house is oak beamed, usually reused from ships or other buildings (figs. 5  6). It seems possible that its origins lie as far back as the 1600s, and parts certainly date from the mid 1700s. Unfortunately the deeds are incomplete and unhelpful. 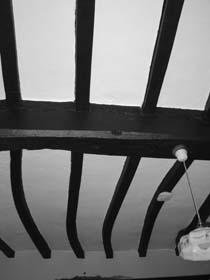 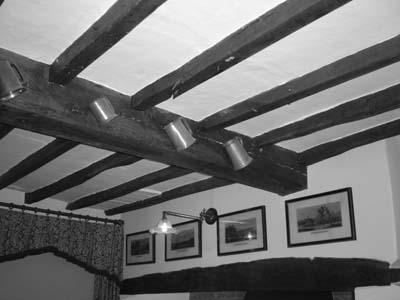 Joy Greig (nee Buttery) has a photograph of herself in the garden, aged about 11 – strange that she should come to live there so many years later. She tells a tale that her mother was sent to the King William IV by her grandmother with a jug to buy some beer. However, she was underage and someone snitched,
for a police constable was waiting for her when she arrived! Jim has an intriguing invitation card, dating from the early 1900s (fig 7).

The pub finally closed its doors for business in 1942, but during the Second World War it was home to evacuees from Ipswich. Norman Riley remembers playing with them in the skittle alley, and when it got dark they would be fetched out by Margaret Horton carrying a lantern. One night, however, the windows were lit up not by the lantern but by the crash of a Dakota aeroplane near the railway in which four Canadian airmen were killed. According to Ken Quail, on VE Day the owner threw all the beds and bedding out of the window into the street and set fire to them. More evacuees from London lived in the cottages by the Three Crowns, who apparently returned later with gifts of jellied eels which, says Norman, were horrible' As a Londoner by birth, I could not possibly comment (ugh).

Jim and joy would like to thank everyone who has commented so favorably on the recent facelift to their home, carried out by Ken, and I, in turn, thank them and Norman for sharing all this information. As usual, any errors are mine alone.