Joyce Sutton and her sister, Doris Hammond nee Williamson are, we believe, the oldest living 'Barrow' sisters still resident in the village. In conversation with Joyce, I learned a lot about their lives 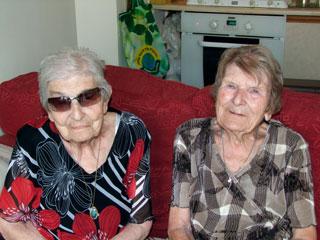 Doris was born in 1921 and Joyce in 1923.The family of four lived in a one up one down in Coal Hill Yard, a place I had never heard of. Apparently it was where the library is now. Everyone was very poor in those days, and Joyce remembers sacks being bleached to use as rugs. On the other hand her Gran, Mary Clarke always known as Polly, gave money towards the building of the Prim. Chapel as it was known, and even had her own pew. Polly's sister Martha known as Pat was the first person to lay a wreath at the war memorial, in memory of a brother killed in the First World War. Pat must have been a striking woman as she always wore a monocle.

As I talked to Joyce, names of places I didn't know kept popping up. I was told that different areas of the village had their own name. Bill Hedge were the houses near the cricket club, New Brighton was the name given to the row of cottages just before Fishpool Way, Town End was the area where Gray's Court now stands and Monkey Row was opposite the Children's Day Nursery that was previously the Trap Pub. When Joyce was four the family moved to Freestone Square, again another lost name. This was an L shaped row of cottages where the Scout Hut car park is now. The cottage was lit by gas, and Joyce remembers the gas mantles on the wall, but she went to bed by candle light. The toilets were pan lavatories across the yard, and the contents were taken away by a horse and dray late at night.

In those days when anybody died, Bella Lockwood was sent for and she washed the body and laid it out, because folk couldn't afford to pay the undertaker to do it. When Joyce was 12, the family moved to a council house. It was in the last block on the right on Sileby Road. They all thought they had gone to heaven because they had electric lights for the first time, an outside toilet that flushed, and a bath room. The water had to be heated in the copper and carried through, but what a luxury! There was even a coal house. Joyce well remembers walking home from junior school after morning lessons, picking up her father's lunch, taking it to him at the Ellis works near Slash Lane, going back home to eat her own lunch, then walking back to school for the afternoon session. 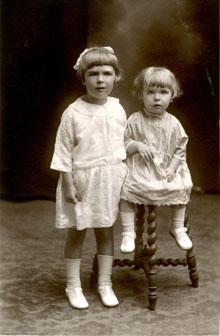 At the age of 14 Joyce went to work at Driver Hosiery on Sileby road. She worked a 48 hour week including every Saturday morning. Her manager was Fred Darby and she worked in the lisle stocking department. For this she was paid the princely sum of 10 shillings. That equates to 50 pence today. Of this, she was given two shillings and sixpence (12 and a half pence) and from this she always spent two old pennies on a visit to Bert's Bug House, a cinema in Sileby. Of course this entailed walking there and back.

When Joyce was 17 she went to work at Wrights of Quorn, and there she was taught to drive, a skill that stood her in good stead when she worked for Alvis at Mountsorrel during the war. She remembers driving the bosses around, a very responsible job, as the firm was at that time involved in aircraft production for the ministry. At the age of 18 Joyce became engaged to Fred Wakelin a gunner in the army. Three weeks later Fred came home on embarkation leave and said he wanted to get married. It was thought impossible to arrange in such a short time, but with a great deal of help from the Reverend Dew, the ceremony took place on December 16th 1941 at Holy Trinity Church. Fred's Christmas leave was cancelled, but determined to see Joyce before he was sent abroad, he came home without a pass, and spent a few days with his new wife, before returning to his barracks. Tragically Joyce never saw Fred again for he was killed in the defence of Tobruk, and is buried in an unknown grave. Joyce didn't hear of his death until five weeks after, and during that time because of delays in the post had still been receiving letters from Fred. As usual Joyce will be laying a wreath on Remembrance Day as she is the last war widow of World War II.

Life moves on and in 1944 Joyce married Raymond Porter, an airman who was 10 years older than herself. This wedding was also at Holy Trinity. They had three children, Jackie, Bedge and Ray, and in 1946 they all moved to a house in Riverside. The rent was ten shillings and nine pence a week (around 54 pence). Raymond died in 1976 aged 62. Joyce who enjoyed dancing found herself a partner, Walter Sutton and six years after Raymond died, Walter an ex sailor proposed marriage and in 1982 the knot was tied at Loughborough registry office. The couple moved to Walter's home in Sileby, but Joyce being a true Barrow girl didn't like it there, so they moved back to Barrow living in Grasmere Close for a time. They moved into Grays Court in 1991. Unfortunately Walter was diagnosed with Parkinson's disease, and Joyce nursed him as long as she could but he died in 2000.

Joyce has now been living at Grays Court for 20 years and her sister Doris (Hammond) has the flat next door. There are five generations of Joyce's family living in the village. They are all descended from the female line. There is so much more I could write about Joyce's memories, but perhaps they are for another time.


Previous menu page: Steve Squires - First flight in the 'Flea'
Next page: The Barrow Dakota or was it a Lancaster?