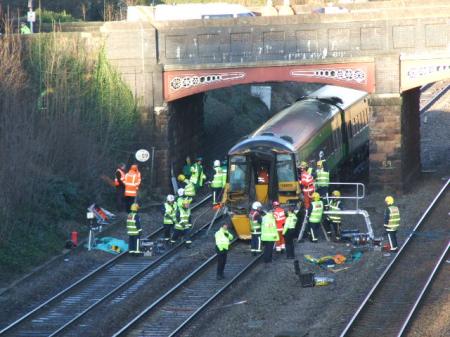 Sometime shortly after 6.00am on February 1st 2008, a tipper truck working on rail maintenance in the dark backed into the old wrought iron pedestrian bridge and pulled a large section down and onto the lines. At 6.30am, a local train came off the rails having hit the fallen bridge. Fortunately, no-one was seriously hurt and what could have been a horrendous calamity was averted.

On Monday September 13th the three sections of a new pedestrian bridge were brought to Barrow by low loaders from Lanarkshire. They had set off the day before on their laborious journey from the Lanarkshire Welding Company where they had been made. They were assembled on the ground beside the track over the next few days and then on Saturday night, the rail track was closed. The 60 tonne stretch of steel was erected remarkably quickly by a single 400 tonne crane onto the new concrete abutments. 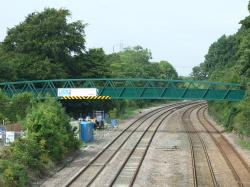 Everything was bolted together, finishing work was completed and now Barrow is enjoying the re-opened foot path….once again. Users are commenting on the better non-slip surface of the bridge and there seems to be general approval for its design; not perhaps as elegant as the old wrought iron, but quite pleasing never the less.

A spokesman for the installing contractors complimented Barrow residents on their patience and understanding.