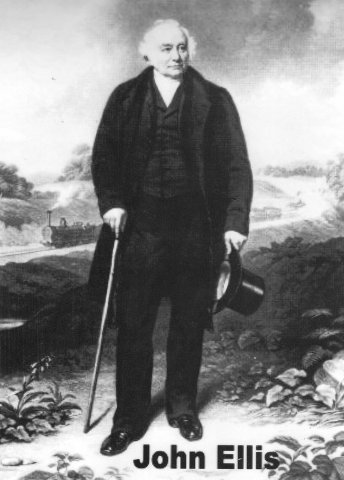 Vast quantities of limestone have been extracted from various sites in and around Barrow over a period of many years.

In the late 19th century there were two large factories processing the raw limestone:

2. Barrow Mills Co - based at the water mill at the bottom of Mill Lane. This company was owned by the Goodacre Brothers and according to trade directories of the period was described as Mineral White Manufacturers producing gypsum and plaster.

John Ellis was a member of the Leicester quaker Ellis family who were involved in many aspects of Leicestershire's industrial development in the 19th century. Originally a farmer in Beaumont Leys, he played a major part in the instigation of the Leicester & Swannington Railway in 1832 which was one of the first railways in England and was constructed by the famous railway engineer George Stephenson. It was built to transport coal from the North Leicestershire coalfields to Leicester, and John sold the coal from a canal-side depot at West Bridge. The canal also brought lime from the county's major lime-fields at Breedon and Barrow upon Soar.
This trade increased enormously when the Midland Counties Railway running through Barrow was opened in 1840.

By the mid-1840's John Ellis & Sons was renting land off Sileby Road in Barrow to extract and burn limestone in their own kilns. By 1866 there were more than 30 kilns on the site. Most of the lime was taken from delphs east of the railway line which were linked by a 3ft-gauge tramway to the kilns; the tramway was replaced by a standard gauge track in the 1920's. By the 1870's the company also had lime extraction and burning operations covering 25 acres at Kilby Bridge near Wigston.

In Barrow the company operated a driftmine near Heyhill Lane, off Sileby Road, and several large delphs around the village. The burning of the lime was carried out in bottle shaped, coal burning kilns.

The pungent aroma given off by the kilns could be smelt throughout the village. Many said at the time that the aromatic air in the village was the reason for people in the area being cured of consumption. Indeed at the turn of the century it was apparently common practice for London doctors to send numbers of tuberculous patients to the village for the 'Barrow Cure' (see article). However, the pure limestone dust at the quarry face was a killer and many of the workmen suffered from asthma and other similar bronchial complaints and only after the introduction of breathing aids were deaths avoided.

In the 1880's, the Barrow works began making plaster, and then cement using the Portland process, at (Portland cement requires good silica shale to be burnt with the lime which was shipped from the Kilby Bridge area). This led to the development in the 1890's of the core business of John Ellis & Sons, concrete products, using granite chippings from Mountsorrel as the main aggregate. Initially, paving slabs, kerbs and sewer pipes were the main products, later reinforced structural products such as roof beams were developed, then a wide variety of products including water towers, reservoirs, fence and gateposts, and artificial stone products.

In 1920, John Ellis & Sons was merged with the Mountsorrel Granite Company, although the two continued to be run independently. An additional 50 acres of land was purchased at Barrow on either side of the railway to expand the concrete products operations. The head office building still stands on the west side of Sileby Road.

The company continued to produce lime until 1925, when they ceased quarrying locally, getting their raw materials from Kilby Bridge, Cement production ceased in about 1935 but the concrete products were still made, with the cement coming from Ketton and the aggregate by rail from Mountsorrel granite quarry.

At the time of the Second World War, the company turned much of its manufacturing activity over to the war effort air-raid shelters, pit props, compressed boards for army huts. After the war, products such as prefabricated houses to replace those destroyed by bombing were made. In 1955, over 55 thousand tons of concrete products were despatched from Barrow. The company was acquired by Redland in 1960 but the manufacture of concrete products continued at the Barrow works. Redland was taken over by Lafarge Aggregates in 1997. 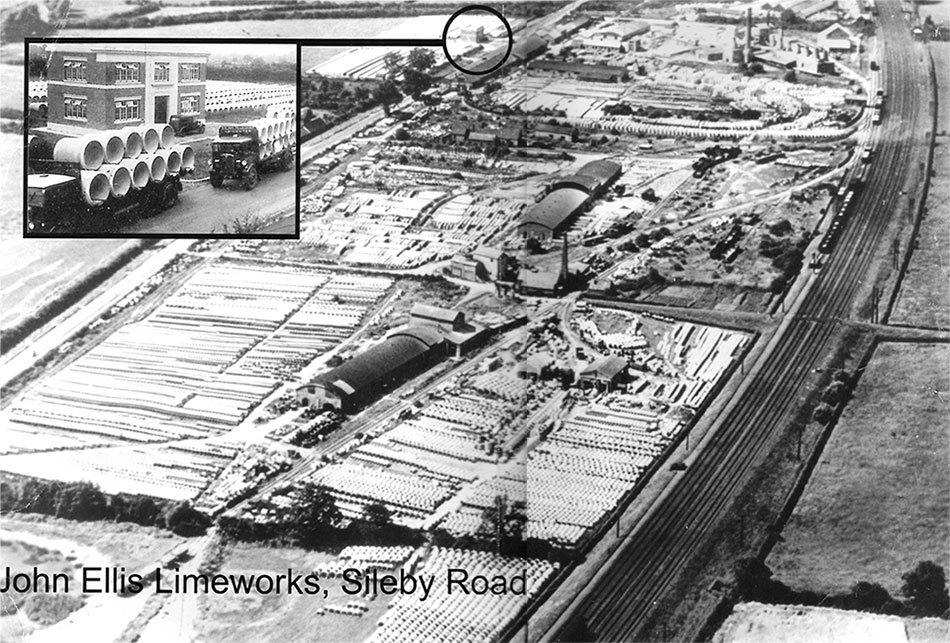 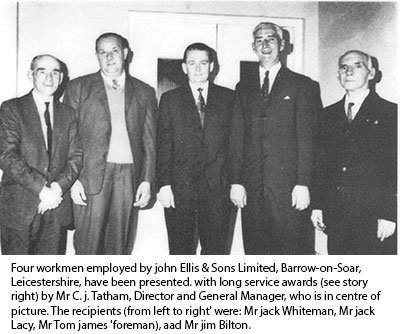 A unique father-son link with the same firm totalling over 110 years was remembered at the annual dinner of John Ellis &Sons Ltd, Barrow-on-Soar, Leicestershire, on 23rd October last year.

It was recalled when four workmen were presented with long service awards by Mr C.J. Tatham, Director and General Manager.

Foreman Tom James, who has completed 50 of the 110 years, received a voucher for a television set. Mr James started with the company on 13th February 1918, at the age of 13 as the first of their joiner's apprentices, earning 7s 6d a week.

His apprenticeship over, he worked as a joiner up until the middle of the last war, when he became foreman of the Rapid Floor plant, until its closure in the early 1960s. He then took up his present position in which he has responsibility for Storage Walls, Trief Kerb and Coal Bunkers. 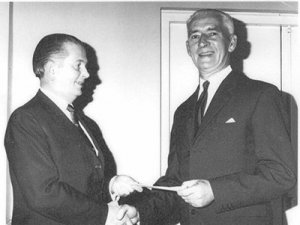 The other three recipients of long service awards were Mr Jack Whiteman, 31 years, who works in the Moulded Works painting new moulds and stripping down old ones (received gold wristlet watch); Mr Jack Lacey, 51 years, who is employed in the Wall Unit Department (voucher for television set); and Mr Jim Bilton, 52 years, who at the age of 65 now works part-time in the Steel Shop (voucher for furniture). 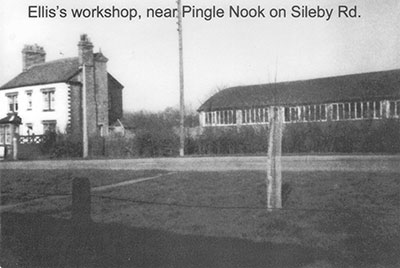 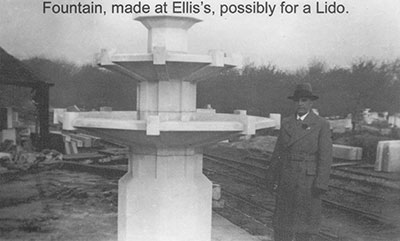 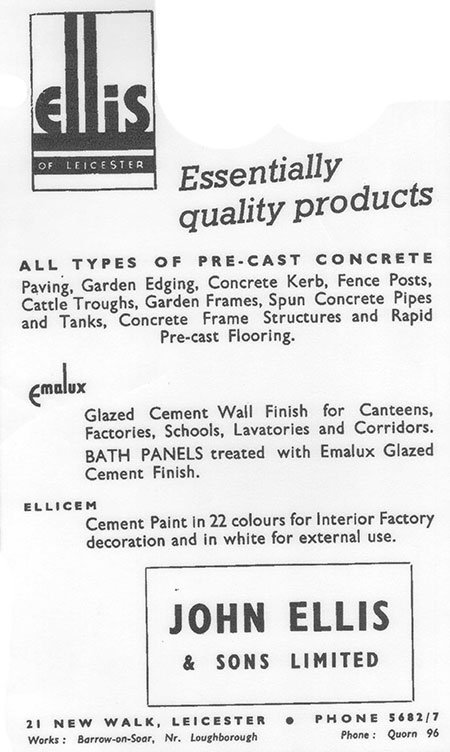