A) Cedar of Lebanon 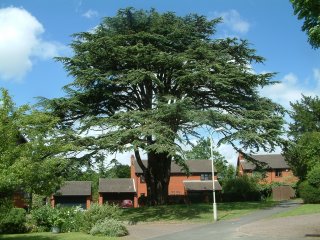 The Lebanon Cedar is an evergreen coniferous tree growing up to 40 m (130 ft) tall, with a trunk up to 2.5 m (8 ft 2 in) diameter. The crown is conic when young, becoming broadly tabular with age with more or less level branches. The shoots are dimorphic, with long shoots and short shoots. The leaves are needle-like, spaced out on the long shoots, and in clusters of 15-45 on the short shoots; they are 5-30 mm (1⁄4–1 3⁄16 in) in length, quadrangular in cross-section, and vary from green to glaucous blue-green with stomatal bands on all four sides. The seed cones are produced often every second year, and mature in 12 months from pollination; mature cones in late autumn are 8-12 cm (3–4 3⁄4 in) long and 4-6 cm (1 1⁄2–2 3⁄8 in) wide, often slightly resinous, and break up to release the winged seeds through the winter. The seeds are 15 mm (9⁄16 in) long, 6 mm (1⁄4 in) broad, with a triangular wing 20-25 mm (3⁄4–1 in) long. First cone production typically begins when the tree is 20-40 years old. The pollen cones are slender ovoid, 3–5 cm (1 3⁄16–2 in) long, produced in late summer and shedding pollen in autumn. 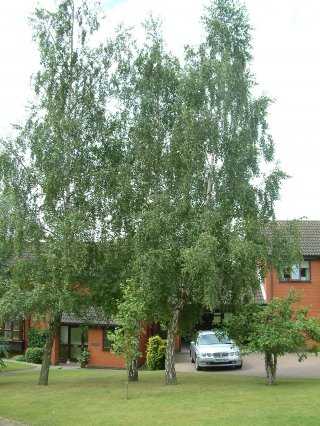 These three Silver Birch trees were planted together in this clump by the developers of the Holbourne Close Estate. 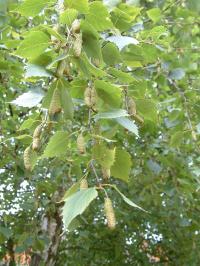 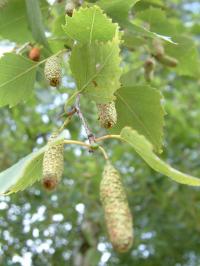 Close up of female catkins of Silver Birch,
Betula pendula 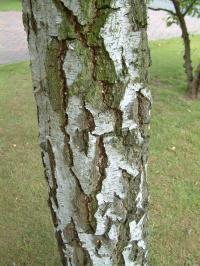 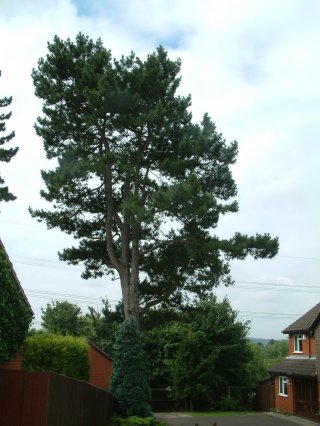 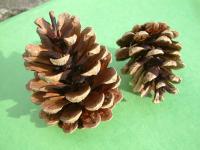 Pine cones of the scots pine 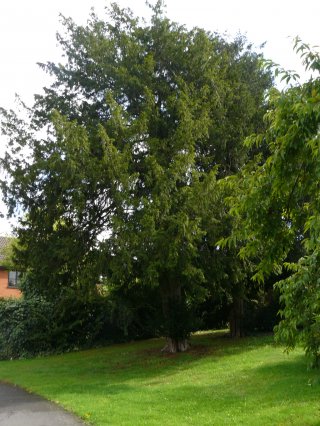 This native evergreen tree (European yew) is a small to medium conifer. The cones are very different from most cones and are the fleshy red berries. Each "berry" contains a single seed. Seeds and leaves are extremely poisonous but the red berry is sweet and edible. Birds such as thrushes and waxwings disperse the seeds by eating the berries and passing out the undigested seeds. 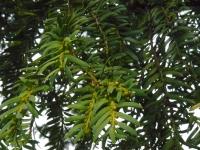 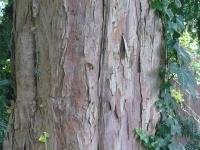 Trunk of Yew Taxus baccata
showing appearance of its bark 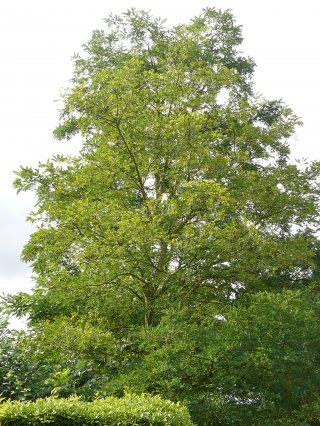 This introduced tree is a member of the pea family. Sometimes called the Locust tree or Black Locust,it was one of the first North American trees to be introduced into England, in the 1630s. Both the false and the true Acacia have very sharp spines on the stem. The name acacia derives from the Greek word meaning thorn. 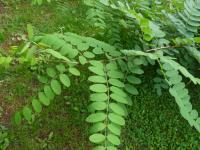 Each pale green leaf consists of a central spine
from which there are 4 - 9 pairs of leaflets and
a leaflet at the tip.This is the pinnate arrangement. 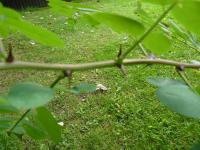 These sharp spines tend to occur only on young twigs.
They probably serve to deter animals from browsing
on the highly nutritious leaves. 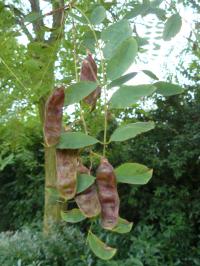 The brown pods contain 4 -8 black seeds
which remain inside the pods. In autumn,
the pods dry and drop off, catch the wind
and carry the seeds away. 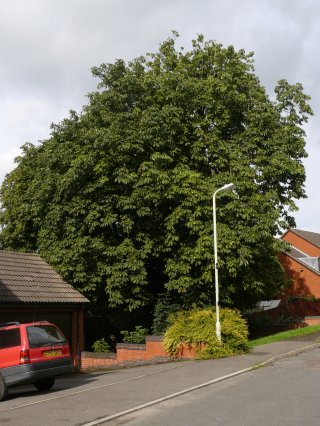 The horse chestnut is not a member of the chestnut family nor does it supply nuts for horses. It was named by Linnaeus after the Roman name for an edible acorn. Its nut looks superficially like a genuine chestnut but is poisonous to many animals. It was introduced into Britain from North America many centuries ago. 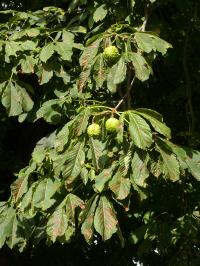 The leaves are palmate, each one consisting of 5 leaflets attached to the top of the leaf stalk. Each leaf thus looks like the palm of a hand. The fruits consist of a spikey capsule inside which there are 1 - 3 conkers or seeds. These are usually described, incorrectly, as nuts. 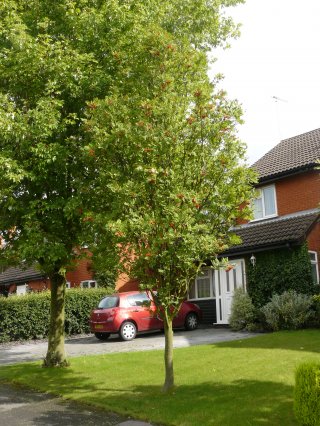 The Rowan or Mountain Ash is a small deciduous tree that is commonly planted in public places and on housing estates but is also a native and is commonly found growing on mountains. It is not a member of the ash family so this is a misleading name. Its berries provide an important source of food for birds.

The Rowan has long held a place in European mythology and folklore as a magical tree that wards off malevolent beings. 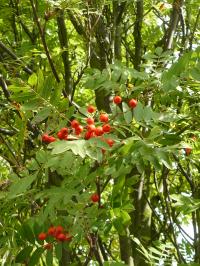 The leaves are pinnate with 4-8 pairs of leaflets that are slightly toothed, and a terminal leaflet. The bunches of fruits start to redden in late summer. 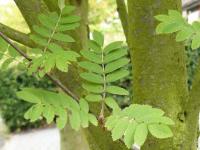 The leaves are pinnate with toothed leaflets arranged in 4 - 8 pairs. The Norway Maple is one of the many species of maple. It is characterised by double flattened winged fruits (samara) and sharply pointed and toothed palmate leaves.

The specimen seen here has a smaller Rowan growing in front of it. 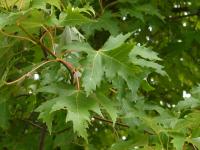 The leaves are palmate with five pointed and toothed lobes.