Click on an image to see a larger view & more details. 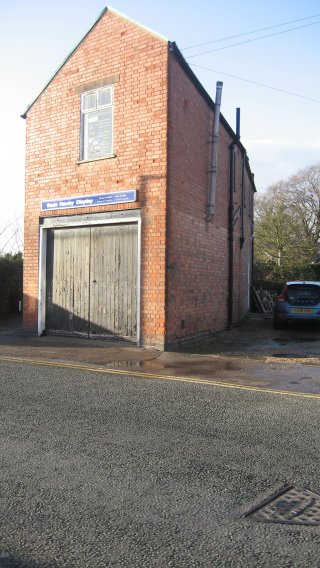 A walk down Melton Road

Melton Road is one of the principal roads in the village, it had several names along its route: it was known as Industry Street, as was Beveridge Street until it was renamed. Street names and house numbers were introduced in 1922 according to Mr R H Bennett. From the square it was known as Nook Lane. The Nook was a property behind where New Street is now and on the left of Melton Road.

As the road leaves the village, it is known as Paudy Lane, the origin may be local, since the name applies to the hill going up to the Old Quorn Hunt Kennels with Paudy Rise Farm at the bottom and Paudy Farm just below the kennels on the right. Beyond Paudy Cross Roads the road becomes Gorse Lane according to a County Council Footpath map. The road joins the route of the Old Salt road near the kennels; the route of the Old Salt Road south west is believed to go from the kennels behind Paudy Farm and along the ridge between Hayhill Lane and Melton Road through Barrow on its way to Quorn to cross the river en route, some think, to Droitwich salt mines.

When the Midland Counties Railway was built between 1838-1840 and the cutting was made through Barrow initially it had two sets of rails, with a bridge for Melton Road and Grove Lane, the first bridge is believed to have been a wooden one. In 1868 the cutting was widened to four tracks and double arched brick built bridges carried the road across. John Sydney Crossley was the Chief Engineer and made his home in Barrow House in South Street in the village.

The Salt Way, which predates the Roman Conquest, continues from Six Hills in a north easterly direction through Croxton Kerrial and near Grantham towards the Wash on the Lincolnshire coast. There is a speculation that the route carried salt from pans on the sea shore inland. Mr Bennett, in his book on Barrow, suggests that salt from a mine near Droitwich was carried to the coast for export. The Salt road is thought to be an ancient trackway with evidence that the Romans improved the road. It has long straight sections, keeping to the high ground and maintaining its general alignment.

BUSINESSES AND PERSONALITIES IN MELTON ROAD

Mr R H Bennett, the Parish Clerk for many years and author of the History of Barrow upon Soar lived at No.1. His Parish office was a small brick building close to the railway bridge (photo 11.17 in Kevon Thompson's book)

On the opposite side at No 2 lived Mr & Mrs Paxton: Mr Paxton was a painter and decorator, he was also a member of the Parish Council and served on several village committees. His wife was a well respected teacher in the village, their daughter Agnes also taught in the village.

The two storey building by Shooters Lane, now part of Mr Newby's printing business was the garage and flat for the chauffeur for the Mount in High Street, Mrs Thompson, who lived at the Mount,was John Crossley's daughter. The yard was used by Messers Scurr- Jowett who were joinery manufacturers in the 19th century and early part of the 20th; they did some of the carving in the Chancel of Holy Trinity Church. The company went into liquidation during the First World War. Scurr- Jowett also built many of the houses in Warner Street in 1895. Johnathon (Johnty) Frear and his sons ran a building business on the site in the thirties. From the same site Albert Simpson ran a joinery and painting business and later an undertaking business in the thirties and postwar. The yard has now been transformed into a private house and garden. The workshop and flat were owned or rented by Mr L Clark who used the garage as a furniture store.

On the right of the road after the Railway Bridge was the Working Men's Club, built originally as the Liberal and Labour Club, recently demolished along with the corner Off Licence next door to make room for the block of flats.

The War Memorial, on the other side of the square, now recording the fallen in Two World Wars was dedicated on 21st May 1921. (There is now a separate village web site for the War Memorial)

Mr. and Mrs. Mee operated a haberdashery shop on the corner of Beveridge Street and Melton Road.

Mr. and Mrs. Harold Clark had a fish and chip shop in one of the cottages on the opposite corner, the suppers could be consumed upstairs in the dining room with oilcloth covered tables. It was a happy meeting point for for the youth of the village, particularly in the winter.

Lower down the road, behind where the bungalows are now on the left, were framework knitters cottages at the top of long gardens, they were once part of the House of Industry in Beveridge Street.

Next to the bungalows where newly constructed flats and house now stand a new store was constucted to replace the smaller Cooperative store in Beveridge Street. This has now gone a victim of modern trading conditions.

On the inside corner of the bend opposite was a coal merchant Mr Jack Dunford assisted at one time by Mr. W, (Billy) Cross one of the village historians who had worked in the village all his life and had a fund of local knowledge; he always had time to keep one up to date with the news and history, anyone who had time to listen.

On the left near the telephone box the Sutton family had a jobbing building yard. Mr Sutton senior lived in New Street and had a path to the yard. His son carried on the business until he retired. Mr.Chris Sharp took over the yard erecting new buildings. He moved to Quorn several years ago. A detached house now stands on the site.

The next property by the phone box, now occupied by a large dwelling, belonged for many years, from the thirties, to Joiner and carpenter Mr Frank J Thompson, a craftsman. The village sign made from teak on Jerusalem Island in South Street was one of his works.

Mrs Allen ran a small confectionery and grocery shop two doors below Mr Thompson's. She closed it after the war and it reverted to a normal dwelling.

Round the corner , after the junction with Grove Lane, a bungalow opposite New Street was occupied by the District Nurse Jordan for many years. She was a small familiar figure in a long dark coat riding her 'sit up and beg' bicycle as she went about her work among her patients in the village.

There was ribbon development of houses each side of Melton Road until after the war when Corahs of Loughborough developed the Highfields and Banks estates. After he retired as landlord of the Three Crowns Mr J. Ilston had a small holding on the right just before the brook. He continued providing horse drawn carriages for weddings and funerals,with suitable cockades on their bridles: white for weddings, black for funerals.Messers Briggs of Loughborough provided the hearse for funerals.Mr Ilstonwas also one of the carriers in the vilage with his dray collecting and delivering parcels to and from the station. On Saturdays and holiday times he usually had one or two boys riding with him and jumping off to deliver parcels. The house was demolished and the site developed. It became Ilston Gardens.

The fields each side of Fishpool Brook were used to graze cattle. Mr Harry Lockwood owned or rented them at one time to keep cattle brought from the cattle market until required for his butchers shop.The large field to the east was used by Mr Briggs for his horses, most of the time.

The land on one side of Fishpool Brook was developed by Messrs Jelson builders on land which they purchased to build the Breachfield estate. A road with a bridge across the brook was built, the land on the left being made into amenity land. The road curves in an arc along the brook and then parallel to the railway line joining Grove Lane just above the junction with Melton Road. Most of this land had been purchased from allotment holders. The houses on the right of the road, from the Grove Lane end, were built by Messrs H Perkins and sons.

We moved into number 48 in 1936. the house was built by the Freer Bros on land purchased from Mr R H Bennett. Number 44 was built shortly after ours. Number 50 was built on a plot which belonged to Mr Clark who lived in Grove Lane but who retained one plot for his garden, the other half he gave to his daughter on her marriage.

The road by our houses had a grass verge and was kerbed and improved after the war. There was ribbon development each side of the road below New Street. Highfields Farm extended from Church Street to Fishpool Brook and beyond, as far as land belonging to Paudy Rise Farm where the bridle way still exists. Behind the houses on the right in Melton Road. were allotment gardens and one or two small fields along the brook. Outside the village the road is still known as Pawdy Lane, though the postal addresses are Melton Road.