A view of No 2 and 4a Beveridge Street. No 4a is one of the oldest houses in Barrow, and is of timber frame construction.

No. 35 Beveridge Street is built of Mountsorrel granite and the single story extension on the end was once the site of the village Cooperative Store

The Baptist Church in Beveridge Street reflects the growth of the Dissenter Movement in 19th century England when many people became disillusioned with the Church of England and set up their own places of worship.

One of the oldest dwellings in Barrow, this house is over 400 years old, built of local limestone, and was reputedly the birthplace of William Bishop Beveridge who lived during the turbulent times of the English Civil War 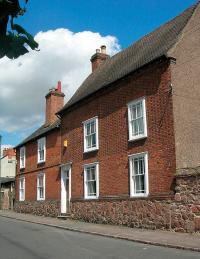 No. 47 Beveridge Street was originally built as a farmhouse. In the early 1900's, Dr Andrew Gray came to the village as its village doctor and he boarded at No.47. Subsequently the house became the Surgery for the village until the present Health Centre was opened. The most recent occupants have been Doctors John and Margaret Earl, John being a former senior partner in the Barrow Health Centre.

The Master's House, part of the old Barrow workhouse in Beveridge Street between 1780 and 1840