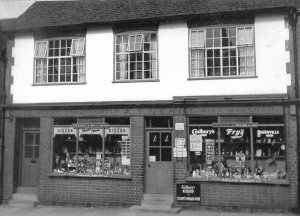 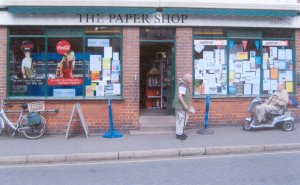 In 2011 a Slush machine was installed on the counter alongside the National Lottery terminal and a huge selection of cards, newspapers, magazines and sweets. Darren and Lorraine also stock local history books and postcards.

In 2010 Darren and Lorraine Hickman took over the business from Nick and Antonia Goater.

The Goaters bought the business in 2004 from Colin Grant and his wife.

In 1960 Colin took over his father Arthur's business which is shown on Kevon Thompson's map as Arthur Grant Newsagent and Wine Merchant.

There was a fire in the shop in 1970. The Grants managed to open for business the next day.

Arthur Grant bought the shop from Rose and Albert Blackshaw in 1945. He coped with post war shortages and sweet rationing.

The Blackshaws built the present premises in 1926/7 having run a newsagents where the current Parish Council Offices are. They transferred the wine licence from a wine shop in Bridge Street. Previously there had been three cottages on the site.

How many boys have delivered newspapers in the village over the decades?

Villages Formed a human chain passing buckets of water in an attempt to put out a fire in a newsagents shop at High Street Barrow upon Soar late last night. The shop involved, V.C. Grant, was severely damaged when the fire spread from electrical meters to the goods on the shelves.

The shopkeeper's wife, Mrs, Jacqueline Grant, was watching television with a friend, Mrs Janice Wilford, of 14 Beachfield Road, Barrow, when all the lights went out. She thought that a power cut had occurred and searched for some candles. When she had found them she made her way to the shop at the front of the house to trace any possible electrical fault.
But when she opened the door of the shop she found flames spreading fast from fuse boxes in a corner.
She said " I got out of the shop as fast as I could and ran back into the house. My three children were all asleep up-stairs and I got them out of bed as quick as a flash.

Stock Lost
Mrs Grant led her children outside while Mrs Wilford raised the alarm. They watched as neighbours organised a water chain using buckets and house-hold bowls in an attempt to extinguish the fire.
Mrs grant said the four men stood at the head of the chain throwing water onto the flames. But she added: "I do not know who they were but I would like to thank them because they certainly saved the shop and house from further serious damage".
This morning it was "business as usual" at the shop despite the destruction of most of its contents, including hardware, sweets and household goods.
Mr Colin Grant (35) said: "People are being very understanding. They are even buying some of the cigarette packets which have been soiled in the fire2. 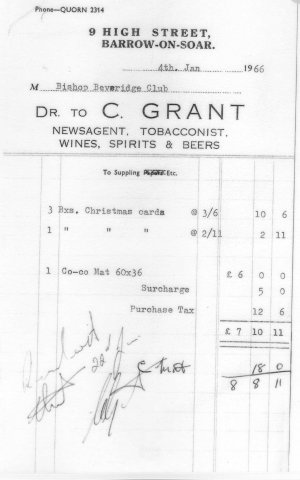 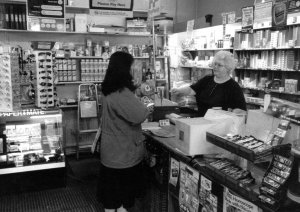