No. 5a High Street 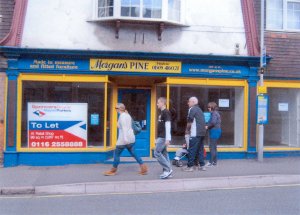 In 2011 Di at Morgan Pine decided to relinquish the shop she and her partner John had set up. Di now takes her wares to markets in the area. She also sells via her website. Morgan Pine sold ready-made pine furniture and custom made items. In addition the shop was like an Aladdin's cave of decorative objects.

Previously the premises was open for a very short time as Tiddleywinks, selling children's play equipment.

In a 1975 edition of This is your Village there appears a full page advertisement for Denize clothing for all the family at competitive prices. Branches: Birstall, Market Harborough, Melton and East Leake.

L. Clarke sold household goods and furniture (see Kevon Thompson's map). There are photographs of the shop with mangles and bath tubs displayed outside.

The Lockwood map shows Lacey and Kettle grocery occupying the premises. In Bygone Barrow Volume 2 by Barry and John Wilford there is a photo circa 1900 showing the shop. 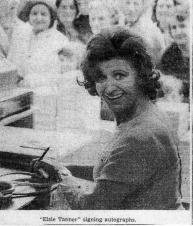 Actress Pat Phoenix ("ElsIe Tanner" of Independent Television's "Coronation .Street") attracted a large crowd when she performed the opening ceremony on Saturday of a new knitwear shop in High-street. Barrow-upon-Soar. This was the second occasion on which Miss Phoenix had opened shops for the proprietress, Denize, the other being at East Leake, Many customers during the afternoon received autographed photographs of the popular T.V. star.