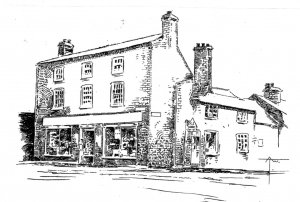 Between the 1920s and the 1950s, there was a sweetshop in the Georgian-style building at the corner of Cotes Road and the High Street (35-37). The owner was Miss Brookes.

In the 1960s Webster and Barnes moved their newsagents' business across the road from No.68 into Nos. 35-37. In the new shop they were able to expand the range of goods on offer.

There is said to be a a beam in the cellar which was formerly in a 'cruck' cottage. It is inscribed 'DON(E) IN 1826'.

Since the closure of Webster and Barnes the building has been used as offices and a Training Centre. 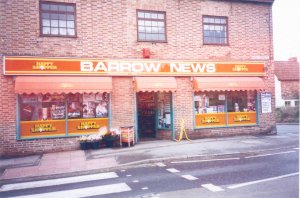 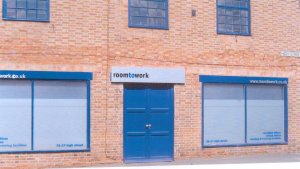 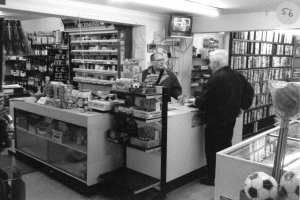 Memories of Webster and Barnes

The origins of my father and uncle’s business begin with Francis Edward Clarke (Ted) who owned the newsagents and hardware shops in the 1950’s and 1960’s. He was one of three brothers who all had shops: George had the fish shop in North St, (where the Chinese takeaway now is), and his other brother ran the furniture shop ( now the estate agent on the High St). My uncle Frank had a part time job looking after Ted’s books after retirement from Driver’s factory. When Frank died my mother took on the book keeping and through this got to know that Ted wanted to retire.

My father suffered a nasty fall from a ladder when painting a house and this cemented his desire to leave the family business ( E. Webster and Sons Mountsorrel : Painters, Joiners ,decorators and undertakers. My uncle Norman Barnes, my mother’s brother, was also ready for a change having worked at Newbold and Burton’s shoe factory in Sileby as a clicker (the man with the sharp knife who cuts the leather to make the shoe uppers, known as clickers, because of the noise the knife makes when cutting through the hides.) So a plan was hatched. My father put up 100% of the capital and Norman paid off his 50%holding on easy terms. Ted Clarke retained his hardware business at number 37, High St and Webster and Barnes was up and running in 1967 owning the freehold of 68 High St and the business, they also took an option to take on the hardware side as and when Ted finally retired.

In the 60’s and 70’s things were very different . Many people smoked, cigarettes, pipes, cigars, and everyone read a newspaper either having it delivered to their home or collecting daily. The “Brush rush” for example a daily (Mon-Fri )phenomenon to behold : at 7 am exactly thirty or so people would enter the shop all wanting to buy their cigarettes, sweets, papers to see them through the day, after five minutes or so they would all leave and head for the Railway Station to Loughborough and work . At 5.30pm a smaller rush would enter for their comestibles for the evening.

Trade ebbed and flowed, the years passed and eventually the time came to sell, precipitated by my dad’s wish to retire. The business had expanded when the hardware store came to us and after purchasing 35, High St from John Burdell (the pork butcher) we got the builders in and made an enlarged shop on the corner of High St and Cotes Rd ‘ everything under one roof’ .We retained No. 68 as a warehouse /store. I looked into buying my dad and uncle out as Norman said “when your dad goes I wish to cut back my workload” so even though I could have borrowed the not inconsiderable sum to buy it but I felt the monthly outgoings to service the debt would be too great for the reducing turnover: amazing how in ten years smoking had become a pariah and fewer people read newspapers! So with a heavy heart in 1979 we sold . Martins the national group purchased the business , Uncle Norman and his family retained 50% of the property (37) and my brother inherited the other 50% as rental income . I inherited No 68 and the hardware business which was a useful add on business but with the larger stores (B&Q, Payless...) in Loughborough it was touch and go as to a living. I added my Travel Agency , coach bookings, and then had a team of part time retired ladies to run it for me as I built up my driving school, teaching many of my friends’ children to drive (and sometimes their wives)

At this point my father’s prostate cancer had became a losing battle and following a stroke he was confined to bed, we took the decision to nurse him at home and I took to sleeping on a camp bed in my old bedroom at No 62 and tending to my dad in the night. Thanks to the excellent care by Dr Simpson and his team Dad’s condition was managed and he remained lucid until the day before he died and only really suffered pain if he woke in pain and needed the morphine. Dad died on Valentine ’s Day Feb 14th 1986.

Having suffered losses, heavy losses, with the hardware business , only meted by my other jobs , I had to close Webster and Barnes ; with hindsight I should have closed it down before but how could I destroy the legacy of a dying man ? I couldn’t and didn’t but after Dad’s death came the end, I looked at taking a share in Gilbert Kinch’s Travel Agency but decided to go back to teaching ..... Debbie my dear wife helped me liquidate the stock very efficiently – lots of people got a bargain and I sold No. 68 to Jill Hughes an optometrist from Syston who sought to open a second shop, she ran it for a number of years and then No. 68 went into the beauty business, which is where it had really started out as Tommy Corbett’s barbers shop all those years ago.

Webster and Barnes’ hardware store was set up six years ago in premises formerly occupied by a newsagent for many years. The shop specialises in eyeryday items for homes and gardens - tools, paints, clocks and watches - as well as fishing tackle and generally conveys that somehow comforting image of the traditional hardware store.

The proprietor's aim is to provide a good service and  many places of interest. goods at the right price.

The subsidiary business run from the shop reflects the owner's interest in buses. The Andrew Webster Travel Agency concentrates on coach travel, either long distance express services by National and Bartons, or coach holidays, for which the operators are National, Tourmaster, Bar­tons and Kinches.

There are also a wide range of summer excursions by Howletts (Tourmaster) and  tours  to provide a good service and  many places of interest.

Webster and Barnes is very much a family affair, run by Andrew Webster, ably assisted by his wife, Debbie, and often by his young daughters, five year­ old Claire and three year­ old Lisa.
Home made
At a time when so many goods are imported, Webster and Barnes are proud of the fact that more than half their lines are made in Britain and several made here in Leicestershire.

With summer coming in, Webster and Barnes invite people to pop in, for a tin of paint. a packet of weed-killer, a present for someone's birthday, or to book a day by the seaside.

They promise customers will be greeted with a friendly smile and good service from people who appreciate their custom.

Article taken from the Loughborough News. Wednesday, May 16th 1984.