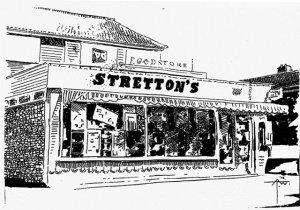 This house and shop replaced a row of thatched cottages in North Street, which had been owned by Mr James, also known as 'Bunjoss James'. These cottages were opposite The Hammer and Pincers, and were next to Coal Hill Yard, where the Library now stands. At the end of the row there was a grocers' shop which was small but full of all the provisions that families might need. The shop was owned by Mrs Basford.

In the 1960s, after demolition of the cottages and shop, Mr and Mrs Stretton came to Barrow and had this house and General Store built on the site. 'Strettons' provided a much appreciated replacement for the old North Street village shop.

Since the Strettons left, the shop has continued to be a convenience store under various managements and franchises. Currently it is known as Barrow Express. 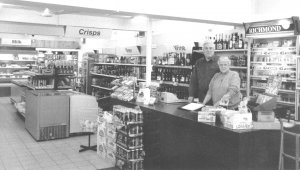 'Coinciding with the seventh birthday of trading in Barrow-upon-Soar, Mr and Mrs. G. H. Stretton opened an extension to their supermarket in North Street yesterday (Thursday).

The opening ceremony was attended by the TV chimp from Twycross Zoo.

The supermarket was opened 2 1/2 years ago and increased trading has necessitated the enlarging of the premises. More hardware ranges are to be stocked and the fresh meats counter expanded.

There were several firms promoting their products through special offers - all quickly taken advantage of by the many housewives present. Wine-tasting was an added attraction and there were give-aways for the children. 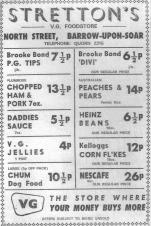 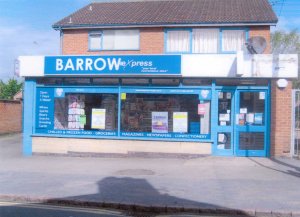