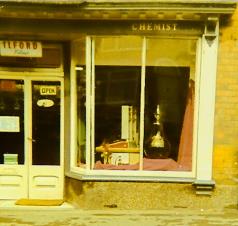 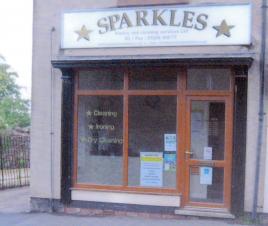 Sparkles opened its ironing and cleaning business in 2008 and closed this year (2012). Since then the internal walls have been removed and work done on the driveway. The property is still empty.

In a photograph of the High Street there is a board on the side wall of number 3 advertising the North Pole Freezer Centre. It was run first by Dermotts and then Kings.

Mrs Lillian Middleton took over the business in 1971. She moved the dispensary to the kitchen at the rear of the property and changed the front area to a baby department. The first floor became a flat.

Within eighteen months a new Health Centre was proposed at the present site. .Mrs Middleton took on 21 High Street.

Besides dispensing prescriptions the shop sold perfumes and other gift items. In both locations Mrs Middleton and her staff were noted for their eye catching window displays. These frequently won prizes.

In the 1960s Mr J.W.S. Allwood M.P.S. succeeded Mr Allman at the chemists. He was certainly in occupation by November 1965. Mr Allwood sported a monocle and had a very dry sense of humour, suggesting to children that they go and play on the railway line.

The shop was wood panelled and had a set of leech jars. Dispensing medicines was carried out in the shop.

It is not clear when Mr A. P. Allman took over the premises as a dispensing chemist's.

The 1891 Census for North Street has William H. Sleeman in residence, aged 33 - Draper. His wife Henrietta, aged 35 is a Milliner. Sometime before the1911Census William Sleeman died leaving his widow to run the draper's shop with the help of son William, now aged 18 and Edward Pearson her nephew. What brought William Sleeman from his parents' farm at St. Minver in Cornwall to Barrow?

The business must have prospered because in the 1901 Census the Sleeman's have Elizabeth Beale as a Milliner, Henrietta Cooper as a domestic servant and aneight years old son named William.

The 1891 Census for North Street has William H. Sleeman in residence, aged 33 - Draper. His wife Henrietta, aged 35 is a Milliner. Eliza Chinsey is shown as a boarder and Draper's assistant.


Previous menu page: History of the Shops in the High Street / North Street & others
Next page: No 3a High Street