History of the Shops in the High Street / North Street & others 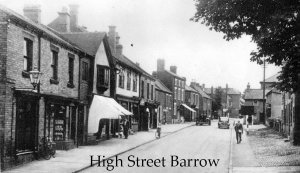 The Chemist was for many years Allmans, it then became Allwoods and is now the shop occupied by Sparkles. When alterations started to take place in the High Street during the 1960's, the Butchers Shop formally known as Condons moved to the shop on the opposite side of the car park entrance and the original butchers shop became the new Chemist site and was taken over by Lillian Middleton. All along that side of the street from Connie Bramley's Haberdashery shop, now the Flower Shop were small terraced cottages similar to many that abounded in the village in the late 19th century. These cottages were demolished to make way for the Fine Fare Supermarket that became Gateway, then Somerfield and now the Co-operative.

The Butchers shop changed hands from Condons to A.J. Hubbard, Grandfather of the present owner David Smart. David and Prue also remember how hard David's Grandmother worked at the shop and Jackie Penney who works for David and-Prue remembers taking out the orders with Mrs Hubbard. The shop has been several things a green grocer in the 1950's known as Sturgess's and I can remember being sent to buy loose peas there for my Dad to plant on his Allotment I walked down the jitty repeating to myself one quarter of Little Marvel so that I didn't forget and ask for Marble instead of Marvel. It was also possible to take your own bottles down for loose vinegar. I remember Mrs Sturgess always wearing a flowery apron. Apparently this same shop was a Post Office and Blacksmiths owned by a Mr Black-circa 1877.

Mr Condon originally had a Paddock where the present Health Centre is located there was also a slaughterhouse and I can remember being upset by the sound of the squeal of the poor pig before the shot but of course this was all part of village life then.

The High Street was called North Street until they renamed the streets in the 1920's. It was always the main shopping area of the village although almost every street had its own comer shop once.

Numbers 4, 6 and 8 High Street were built around 1860 as housing for railway workers.  This information is believed to be correct due to the brick pattern which was commonly used on railway houses. Numbers 4 and 6 were later converted into the Midland Bank.  Number 8 was occupied by Mr and Mrs Bradshaw from  1951 (approx),  until it was converted into a shop.

The shops are identified by their street number not the name as over the years the names have changed.

Should anyone have further information on any of the shops please contact us.


Previous menu page: History of the House of Industry
Next page: No. 3 High Street