In a sense my life has now turned full circle. Born into a farming family I enjoyed childhood in the fifties on my father's farm, Elms Lodge,  on Pawdy Lane, (the old and correct spelling of the lane). After leaving Humphrey Perkins School, I set about a career in education, lecturing in farm mechanisation, first in Wiltshire then latterly at Brooksby College. After the death of my father I returned to the farm where I am today.  In the past  50 years, agriculture like most other industries has changed almost beyond recognition, driven in large part by economics and facilitated by mechanisation but also by social and demographic changes as well as aspiration. Men like my father who farmed at that time were different from the farmers of today- they were totally self- reliant:  they had to be because telephones were few and far between, consequently help was not easily at hand. Also, not being bound by countless rules and regulations they were virtually a law unto themselves on their own land with one consequence that they were not always the easiest people to deal with. But they were hardworking, capable, honest and reliable.

Fifty years ago farming was very labour-intensive. Although mechanisation has been, to some degree, ongoing through history, it received a critical impetus after the war with the shortage of labour. Land girls had taken the place of men on the farm at this time but were keen in most  part to get back to more traditional women's work. A farm labourer's life was not an easy one. Hopes and aspirations after the previous few years of hardship were high for a better standard of life and that did not necessarily gel with farm work.A good example of the way things have changed is to look at haymaking, now largely superseded by silage although not ntirely, as silage is not suitable for all stock and farming practices.  Up until the early fifties my father and uncles still used heavy horses, (in our case we had shires).These had been the main motive power for centuries along with bullocks, which were inferior both in power and temperament, although they were dual purpose in that you could eat them if they became too obstreperous.

Back To Haymaking. The mower used was a finger bar type; its cutting action resembled that of several pairs of scissors on a bed about 4 or 5 ft long. There was a perforated metal seat on the machine usually spelling out the manufacturer's name (now very collectable) from which the operator controlled the lifting and lowering of the knife bed and the three- abreast horses. After mowing the grass, it was left to dry for a couple of days before it was tedded. The tedder or side rake, as it was sometimes called due to its action, rolled over and fluffed up the hay row allowing it to dry quicker. It also had a perforated metal seat on which the operator sat. From here you would operate the machine and control the single horse or pony, which pulled it. When the hay was dry it was gathered using a hay sweep, a wooden implement  with tines at the front to do the work and handles at the back which you controlled
the machine with, as you walked along behind it also controlling the horse which was pulling in front of the tines. The hay was gathered and stacked into cobs (small stacks) which gave it some weather protection until you had time to make the proper haystack. This involved dragging the cobs to the site of the stack by placing a rope around the base. Because the hay in the cob had usually ad time to settle before you moved it, most times it did move as one lump.

* From an Article taken from Barrow Voice

Working with the Heavy Horse

The main breed was the Shire, found in most districts of England it stood 16 to 17 hands and weighed about three-quarters of a ton although some were bigger and heavier. Common colours were bay, brown and black, greys being less common. The Shire was rather slower than other breeds. It exerted its power steadily which effectively put less stress on the harness than a snatch would. he Clydesdale, again a popular breed, had a greater length of leg and a rather lighter body making it appear taller, though in fact it was a similar height to the Shire- because of its longer leg it was a faster mover than the Shire and tended to be favoured where road work was important.

The Suffolk Punch, distinguished by its barrel shape and bright chestnut colour, was popular on the wetter heavier soils because its legs were free from feather and therefore easier to keep clean. During the 1920s a new breed was introduced from France- The Percheron. It was smaller than the Shire but a quick mover and particularly good tempered and docile; the most useful characteristics in a work horse. In reality most working horses on the small farms were cross breeds. It would have been far more important to know which farm the foal came from and to have had a good look at its parents than anything else.

I still have vague memories of my father, Joseph Bird junior, working with two Shires; they were grey and as I remember were called Kitty and Blossom. Blossom was the older and was used where one horse was required. Kitty being younger and still in training worked alongside Blossom when ploughing or when other heavy jobs needed to be done. When I was a child these animals seemed absolutely enormous. My father would lead Blossom to the side of a field gate which I would then climb in order to get on her back; her back was so wide it was like trying to sit astride a large barrel and as she walked she rolled from side to side making it necessary to cling onto the harness on the head collar but what an exciting ride for a six year old. 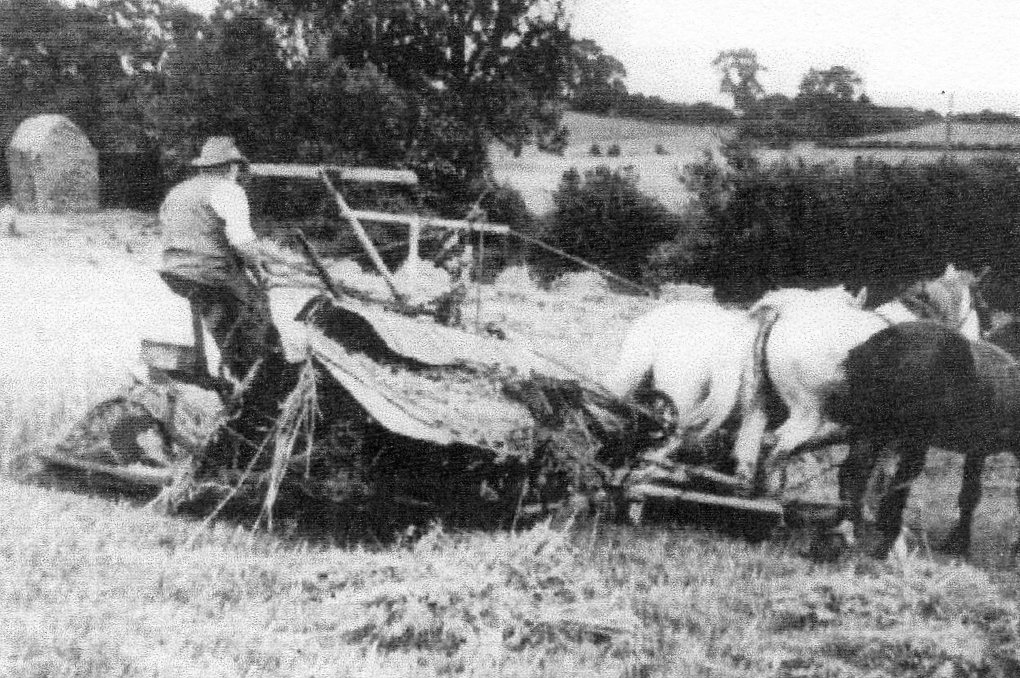 My father's younger life would have been spent with the heavy horse but by the time I came along he was beginning to look with some envy at the neighbours who had tractors. Eventually he clubbed together with his brothers to buy a couple of Standard Fordsons. He did however have many stories to tell of his time with the horse.

There were as many problems buying a horse in those days as buying a second hand car today. My father told me of the time when my grandfather (joseph Bird senior) bought a horse from a persuasive dealer. It looked fine but it was not until it was put in the shafts that its true colours emerged. It had the habit, when it felt it was being worked too hard, of lying down. This of course either snapped or cracked the shafts. I thought it prudent not to ask what grandfather did with this horse.

Going back further to when my grandfather was a young man at the turn of the century, tractors were becoming available but they were still in their embryonic stage and considered by many to be more temperamental and unreliable than horses. On a cold wet morning it was more by pure luck than mechanical reliability that the tractor would start. This made catching an unwilling horse child's play by comparison.

I don't think my grandfather ever drove a tractor or ever wanted to. His life was spent solely with working horses. As a young man he would take a stallion around to the various farms to service the mares. I think he must have thought this a much better  job, escaping the hard graft of farm work for a while. He would be away from home sometimes for as long as a few weeks. He got the chance to travel beyond the local Village, see other farms and meet other people. He would sometimes be shown great hospitality and given a warm bed for the night; at other times he would have to spend the night in the stables with his horse. It was on one of these trips that he met his future wife Lydia, my grandmother. She worked as a cook in one of the manor houses he visited. No doubt he would have been well looked after on these occasions.