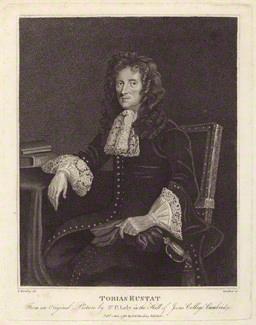 Tobias Rustat lived a long and distinguished life but very few people in the village of Barrow upon Soar have ever heard his name. There's no memorial in the church, no village roads or buildings are named after him so why should he be mentioned or remembered as a famous person from the village?

Tobias was the youngest of the seven children of the vicar of Barrow, the Revd Robert Rustat (1567 to 1637). It was usual for the sons of clergy to become vicars in those days but in his case the young Tobias was apprenticed to a barber-surgeon in London. It has been recorded that this was "an unhappy lot for a country lad" and he left this position to join the household, as a servant to Viscount Basil Feilding, a Leicestershire landowner. Whilst in this employment he spent the years 1634 – 1639 in Venice where the viscount was England's ambassador.

When Tobias returned to England he left Feilding's service for that of his young nephew the Duke of Buckingham who was being brought up with the king's children after his father's assassination in 1628. Tobias then took the opportunity, of making what proved to be, in the long run, an excellent investment, the foundation of his fortune and his many benefactions. He bought the reversion (the right, when it fell vacant, to be appointed) to the office of Yeoman of the Robes to the young Prince Charles, later to become Charles II.

He was faithful to the king (Charles I) throughout the years of the Civil War and accompanied the young prince (later Charles II) into exile. Tobias was a loyal companion to Charles, he accompanied him in his travels across France, Spain and the Netherlands, he even acted as a courier, risking his life to carry messages, for the exiled king, across the channel.

The King returned to England in 1659 and Tobias was rewarded for his loyal and devoted service with his appointment as Yeoman of the Robes. In addition Tobias was also appointed under-housekeeper at Hampton Court and became a director of the Royal African Company.

These positions, the fact that he was unmarried and had few household responsibilities enabled this man to amass a large fortune. During his life he made many benefactions most notably to Jesus College Cambridge where he provided an endowment of books for the library and established a trust fund, for the award of scholarships, which is still in existence today in the form of awards of grants of £1,000. A Rustat Feast is held each year at Jesus College in remembrance of their generous benefactor.

Tobias also donated monies to churches in Leicestershire and towards the building of the Royal Hospital at Chelsea. To show his loyalty to the King and his family Rustat commissioned three royal statues from Grinling Gibbons all in Roman costume – one of Charles II at the Royal Hospital, Chelsea; of Charles II on horseback, in the grounds of Windsor Castle and of James II, now in Trafalgar Square. Tobias is buried in the chapel in Jesus College, Cambridge, he left £20,000 in his will, equivalent to over £1,700,000 today.

Despite all of the above there is no memorial or mention of Tobias Rustat in the parish church in Barrow.

Tobias Rustat extra information January 2021
Rustat gave large donations to the University Library and Jesus College Cambridge. Much of his wealth came from his involvement in The Royal Africa Company which was responsible for shipping more enslaved Africans to the Americas than any other company.

The University Library and Jesus College are looking into ways of using the funds to support research into slavery and, in partnership with the BAME community, how the money can best be used in the future.