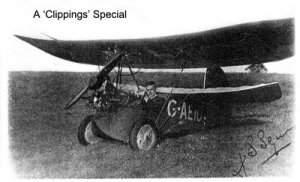 Ready to fly - Steve Squires in the cockpit of his Flying Flea in the early Thirties.

Following an article in Evergreen (Summer 1995) which recalled the brave amateur plane-builders and aviators of the 1930s, many readers sent in their own memories of the “Flying Flea" - a kit plane which, with materials costing approximately £75 and a wing-span of just 13ft, was designed to provide the man in the street with a cheap means of building his own aeroplane and learning to fly.

One reader in particular, Mr Harry Squires, who now lives in Canada, had vivid memories of his childhood in Barrow upon Soar, Leicestershire, spent observing the exploits of his brother Steve (21 years older than himself), who built his own Flying Flea in their father‘s garage.

Carefully following the instructions in the step-by-step construction manual, Steve created the body of the plane mainly out of simple plywood. Slowly, under the watchful eye of little brother, Harry, who was also bitten by the flying bug, the aircraft took shape.

Once its 5h.p. engine was in place, the “Flea" was ready to fly. The fact that its pilot had no flying experience didn‘t seem to present a problem at the time!

In later life, Steve Squires was interviewed about his youthful exploits in the flimsy aircraft, which he recalled with great clarity...

With the support of several friend, I took it (the “Flea “ ) to an airfield near Melton Mowbray and embarked on what now seems a daredevil and foolhardy feat of taking to the air with the flying instruction book on my lap. I had studied it carefully on the ground, but it proved a vastly different experience putting theory into practice when airborne.

On that maiden flight, I didn‘t venture much higher than 20 feet, and found that the most difficult part was coming down to earth again, as the plane no sooner touched the ground, than she bounced into the air again. The second flight proved even more hair-raising, as I took off with great flourish, far too quickly, the result being that I flew between two large trees at the end of the runway, severing the ends of both wings and breaking both my ankles.

I reckon if those trees hadn‘t stopped my progress, I would have been the first man to reach the moon!

Undaunted, and with his first plane in pieces, Steve Squires embarked on an even more ambitious project, to build and fly a single-seater Luton Minor, which was completed at the end of 1936.

This time, he was determined to stay aloft a little longer and joined the County Flying Club, where lessons were 10shillings a time. He made a natural pilot and gained his licence in 1937, taking the Luton up for hours at a time, with only two forced landings.

Playful stunts were part and parcel of the flying scene, and on one occasion Steve planned to surprise his cousin Marie on her wedding day. The idea was to drop a decorated horseshoe from the sky at the feet of the happy couple as they left the church. Unfortunately the stunt misfired, and an alarmed wedding party had to run for cover!

He flew the Luton quite often before the hostilities of the Second World War got in the way, but sadly, with the outbreak of war, the plane was put in storage and later sold. However, this was not the end of the story for it was later featured both on TV and at air displays.

During the war, Steve continued flying for the Home Guard and was a glider pilot instructor with the Air Cadets. He also flew demonstration flights on “War Weapons Week" money-raising drives for the Auster Aircraft Company.

Steve Squires, who died in 1980, made light of his exploits, likening his activities to the hang-gliders of today: “I suppose in those days, amateur plane-making and flying was considered quite a daring pastime, which any young bloods wanted to try," he said.

As for his little brother, Harry, it was awhile before he allowed the flying bug to really bite. After emigrating to Canada with his wife and children in 1957, he finally got around to learning to fly, receiving his pilot‘s licence in 1974.

The aircraft of today are a far cry from the plywood “Flea", but while thanking Harry Squires for sharing his memories with us, we should also like to wish him many more hours of happy flying. Keep reaching for the sky, Harry! Your brother‘s spirit is with you in that cockpit!

Click on an image to see a larger view & more details.

Our thanks to Nora Squires in Canada for providing all the information.