- Richard Bennett deserves to be recognised for his contribution to Barrow Upon Soar; notably through his Parish duties, historical local research, and dedication to the Baptist Church, and also his involvement in numerous other village activities. He was Honorary Secretary of the Rising Stars Football Club in Barrow.

- Mr Bennett was born in 1870 in Ruddington, Notts, and moved to Barrow at the age of 1 month, where he grew up in various dwellings within the village with his parents and 2 younger brothers and sister.

- On leaving school at the age of 12 years, and having received only an extremely basic state education, Richard went to work at 'Goodacres Mill' as a labourer and progressed over the years to supervisory status. Following closure of the Mill, he obtained employment at 'Black & Drivers' hosiery factory, where he was Assistant Overseer in the Finishing Room.

- Concurrent with his main employment, Mr Bennett was appointed Clerk to the Parish Council – a position he held for 32 years. It was recorded in the Council Minutes of 1941 that throughout his period as clerk he had not missed any council meetings or appointments.

- A branch of the Adult School Movement was started in Barrow in 1897, with the aim of improving good fellowship amongst local communities and also teaching some basic reading and writing skills to those in need. Mr Bennett was involved in this movement for many years.

Mr Bennett was a self-taught musician, being proficient in the violin, cello, double-bass and piano. He started what became 'Bennetts String Band', later to become the Adult School 'Glee Party' appearing at worthy causes in the village and surrounds. He also encouraged his sons to become accomplished musicians and they held light musical and orchestral performances in the village. At the age of 73, Richard was made Honorary Member of the Men's Choral Society. 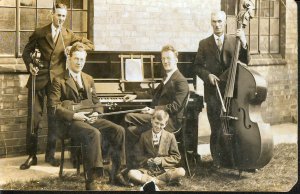 Musical performance at rear of Baptist church. R Bennett
(Back Right), with sons and grandson 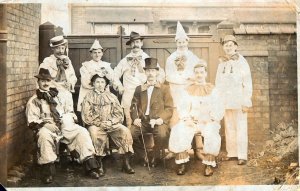 -The extended family were active members of the Baptist Church. Further to attending the church from childhood, Richard later became a Sunday School Teacher and progressed to full Member of the Church Committee, a Trustee Member of the Baptist Charity Committee, and latterly Superintendent and Church Deacon. He was also involved in the musical activities within the Church, acting as Choir Master for over 25 years, directing the Sunday School Anniversaries and religious orchestral concerts.

- In 1935, the 'Short History of Barrow-Upon-Soar' was published by Echo Press Ltd. This booklet, charting the historical aspects of the village from known origins to 1938, was researched and written over a number of years by Mr Bennett - profits from the sale, being donated to Barrow Nursing Club. The amount of time and effort required for the research and compilation of this historical record of the village during the 1930s, without the assistance of modern technology and readily available written material must have been a vast undertaking.

- Richard Bennett died on 4th November 1945 and his funeral service on 8th November was followed by interment in the cemetery at Cotes Road, Barrow-Upon-Soar. Reverend W Scott officiated and praised the good life-long work for both the church and village. Mr H Pell, Chairman of the Parish Council, paid a tribute to Richard, describing him as 'an unassuming man with gentle ways, who was a friend and colleague as well as Clerk.'

A poem was specially written for Mr Bennett by Alfred Peat and was read out at the service:-

A HUMBLE TRIBUTE TO A WORTHY MAN

This was his Village home in childhood days.

On through the changing years to ripe old age
And day by day an unseen organ plays.
Sweet tones and discords on this lovely stage.

He loved the Mill where pent-up forces ground.
The rough hewn segments into powder fine
And shared with nature as the years rolled round.
The powerful impress of the Spark Divine.

He graduated in the Sunday School.

And sang each Sunday in the Chapel choir
He learned and taught with zeal the Golden Rule.
And harmony became his chief desire.

Then as in strength he to full stature grew,
To lead the children and to guide the choir
The parents came their homage to renew
And feel the thrill of heavens celestial fire.

Thus through the Village his sweet influence spread
For service was the keynote of his life
And he had faith that God, the Fountain Head
Would end for aye the discord and the strife.

Tis now goodbye to all he served so well
And those he loved through many happy years
O may the peace of God within you dwell
And songs triumphant check the falling tears.

- History of Baptist Church (from Baptist Minutes), by Dorothy Hudson 1994

- 'Short History Of Barrow Upon Soar', by Richard Henry Bennett