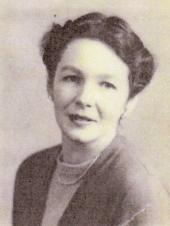 Though not a native of Barrow, Frances Davis devoted over 50 years of her life to community service within the village. Frances and her husband, Christopher, came to live in Barrow in 1946 and lived in The Old Vicarage. She had worked as a lecturer prior to her children being born but gave up her career to devote her considerable energies to her family and to improving the lives of the people of Barrow. 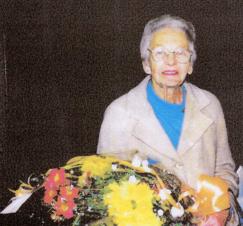 Together with others she established the Women's Institute - which is still going strong after 64 years.

Then she, became a crucial part of a group that could see the benefits of providing social activities aimed at improving the lot of the elderly in Barrow. Frances Davis was The Honorary Secretary from the start of planning through to the inauguration of The Bishop Beveridge Club in 1952. She served as Leader of the club from 1965-1999.

In addition to these achievements she was a Churchwarden, a Governor of Humphrey Perkins School and was involved in the management of Barrow's Almshouses. When the Old Men's and Women's Hospitals needed renovation she was involved in the decision to sell the Women's Hospital so that the Men's Hospital could be refurbished and become an almshouse for both genders. When Friends of Barrow Health Centre was formed, Frances became a very interested and active member. She was also a Justice of the Peace and served at Loughborough Magistrates Court.

In 1996 she was awarded an MBE for her services to the community in Barrow upon Soar - an award that the people of the village thought was thoroughly deserved. She was very fond of Barrow and particularly appreciated the friendliness of its inhabitants.

In spite of her busy life and her work as a volunteer, Frances still found time to enjoy playing the piano and reading crime novels!

Frances Davis was a remarkable woman who gave unstintingly of her time, energy and abilities. The village of Barrow continues to benefit from her vision, zeal and contribution to village life.