A widow erected a memorial to herself more than a decade before she died. In Trinity Church, Barrow the inscription reads:

"In a vault at the foot of this monument lies interred (together with her only daughter)the body of Martha Utber, relict of Thomas Utber, late of the city of Norwich, gent. and fourth daughter of John Marshall, of Barrow, gent. by Margaret his wife; whose family came into England with William the Conqueror, being a younger branch of that William Marshall whose original was French, and was distinguished with honours agreeable to his martial merit with the Conqueror.
As the family of the Utbers, as well as of the Marshalls, is very antient, and are now both extinct in the male line;
Mrs Martha Utber has erected this monument, to shew a pious gratitude to them both, and to perpetuate their memory, 1745"

Nichols wrote that Mrs Utber lived about 20 years after erecting this monument in1745. On her coffin her age was said to be 99.

Who were the Utbers and Marshalls?

The family of Utber, otherwise Utker, were of the city of Norwich and of Hoo in Norfolk.

I have found no record of Martha Marshall's baptism in the Barrow registers. During this period the parish records are incomplete.

We do know that John Marshall, a yeoman of Barrow and his wife Margaret had several children. Martha claimed to be their fourth daughter.

John Marshall, senior, was fined 6/- for keeping horses and beasts on the Common in the North End in 1652.

Between 1622 and 1688 there were 73 houses in Barrow with 154 hearths which were subject to tax of 2/- each. John Marshall is listed as having four hearths.

John Marshall wrote his will in 1611 and it was proved in Leicester in 1615. The will was witnessed by Robert Rustat (seventh son of Tobias), Theophilus Cave and George Marshall.

This suggests that John was of some importance in the village. 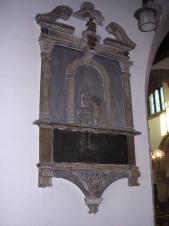 Martha was married to Thomas Utber

There is a Thomas Utber of Hoo and Colkirk, son of Thomas(died 1679) and Ann Thomas' will was dated 1715 . He was buried in Talconeston in 1722 in his 72nd year. His stone is engraved with the Utber arms but impaling Marshall. (see Neave's Funeral Monuments ) 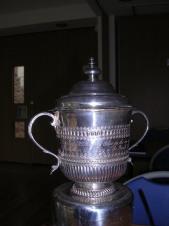 I did heretofore deliver unto the hands of the Vicars and Churchwardens of the town of Barrow a large Silver Cup with the Utbers and Marshalls arms Ingraved thereon. Now my mind and will is that the same shall be kept in the parish Church of barrow upon Soar aforesaid and there used at all times for the Celebration of the Sacrament of the Lord's supper within said Church but desire that the Sacrament money may not be received within the cover of the said Cup as it has usually been.

In 1760 the Inclosure Act was passed by the House of Commons allowing the dividing and inclosing the several open and common fields, meadows and commons within the Lordship or Liberty of Barrow upon Soar, consisting of 2250 acres including roads.

On 1st February 1761 Martha signed her will. The witnesses were Thomas Yates, William Hall and James ?Page.

I her will Martha requested that:

In her will Martha names several local people.

Martha's executrix was her neice Ann Herrick, the only daughter of her nephew John Herrick late of Beaumont Leys. Ann's mother Elizabeth was the daughter of Samuel Marshall. There is reference to "my Granddaughter Miss Diana Kingston my mourning ring and all the writings in my Custody that belong to her".

The wife of Mr William Shilcroft Mason of Burton on the Woulds was left a small amethyst ring.

In her will Martha refers to property within the City of Norwich or the Liberty thereof and within the Town Lordship or libertys of Barrow upon Soar.

Her servants Widow Harcourt and Thomas from Norwich were remembered.

There are many unanswered questions. When did Martha reside in Barrow? Where did she live? What can we discover about her daughter who predeceased her?

A short History of Barrow upon Soar R.H.Bennett