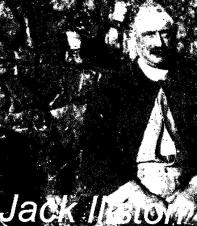 Jack was born at 'Orange Tree Inn', Northgate, Leicester. Whilst in Leicester he had been running a business supplying and driving horse-drawn cabs and carriages mainly at weddings and funerals. He decided to look for more remunerative work and came to live in Barrow with his family in 1910, where he applied for, and obtained the licence for the Three Crowns Public House which he ran for 21 years. He brought with him his horses and carriages, which were stabled at the rear of the inn and he continued with his carrying work in addition to being licensee. He saw a need for local transport and set up a horse-drawn taxi service between Barrow and Loughborough.

On taking retirement from the licensing trade, Jack and his family started a small-holding in Melton Road and he also owned and farmed some fields in Mill Lane. He continued his general carting business within the community and also using his horse-drawn drays for deliveries to and from the Railway Station. The locals used the horse-carriage business for weddings, funerals and christenings and he was even known to assist those in need to move house. He was described as a man of strength, well over six feet in height, with a weather-beaten face and always had a twinkle in his eye, and a smile and ready wit for all.

Jack was closely associated with local football and he was tenant of Salters Playing Field (now 'King George V' Playing Field) where the '3 Crowns' and 'Holy Trinity' football teams rivalled. He worked for the Council removing rubbish with his drays and was seen to regularly provide and drive them for use in community events and carnivals. He served on the Co-operative Committee for several years as part of his commitment to the village.

Mr Illston was a very well-known and loved character, always willing to lend a hand to anyone needing assistance of a personal nature, neighbours needing help with horses or cattle, or with transport. The expression 'Fetch Jack' was common. He was never so happy as when he had a dray-load of children helping with his haymaking. The horses pulled the drays during the working day and children used to beg for rides when they were returning to the fields for the evening, and even when the carriages were on the return journey from a funeral.

Jack died at the age of 69 years, leaving a widow, one daughter and 3 grand-children and was interred at Belgrave Cemetery in Leicester. A village street 'Illston Gardens', off Melton Road, is named in his memory.