Known as 'E.P' or 'Mr.Music' during his years as Leicestershire Schools' Music Advisor, Eric Pinkett and his family lived opposite Jerusalem Island in the house called 'Falstaff.

Born in Nottinghamshire he studied the violin at The Royal Academy of Music and then, before the 2nd World War, became involved in Music Education in a Nottinghamshire school. When he was called up to join the RAF as an airman, he was sent to Cranwell and was then appointed a conductor of RAF bands, which he did for 6 years. This gave him the valuable experience he needed for his next venture.

After the war he joined the staff at Melton Mowbray Grammar School where he taught Music and Sport - though most well known for his music he was always a very keen sportsman. After a few years he was appointed Music Advisor to the Leicestershire Education Department.

With the support of the Director of Education, Stewart Mason, Mr Pinkett embarked on an ambitious plan to transform music teaching in schools from just being singing lessons, to enabling as many children as possible to learn to playa musical instrument. His plan also involved the establishment of a countywide Schools' Orchestra that would meet weekly. 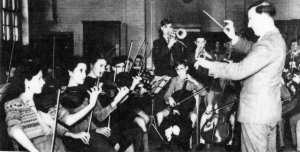 The orchestra met first in 1948, after 2 years of hard work encouraging the donation and loan of instruments, and also persuading schools to support his ideas. The orchestra still exists today, after 65 years. Present day members come from both county and city schools.

During Mr Pinkett's time the orchestra inspired a number of famous conductors and composers, such as Sir Michael Tippett, Sir Arthur Bliss, Norman Del Mar, to become involved with the development of the musicians and with their performances and recordings.

As a result of Eric Pinkett's vision, determination and hard work a great many Leicestershire children learned to love music and many, have gone on to become professional musicians.